Bitcoin and How It Works

Imagine if someone informed you in 1985 that you can have instant video communication with your friend far away with no cost from your phone using Skype and Internet maybe you will not believe him but now we use it daily and for free. For the financial sector, we can describe the technology behind Bitcoin new to us as the per-sonal computer was when it first was appeared in 1975 and the Internet burst upon in 1993.

As the Internet operates without a central governing body also Bitcoin is made to be a platform that can really transform how we store money, how we use money and how we make payments.

Don't use plagiarized sources. Get your custom essay on
“ Bitcoin and How It Works ”
Get custom paper
NEW! smart matching with writer

Just like people left the music and video record-ing industry and turned to the free music using YouTube or Napster’s unlimited on-demand streaming, similar people again would leave the banking system and make use free banking using Bitcoin or any free-banking alternative that will rise.

Bitcoin is a type of digital currency in which encryption techniques are used to regulate the generation of units of currency and verify the transfer.

P2P network-based virtual currency that is traded online and exchanged into currencies. When paired with third-party services, allows users to mine, buy, sell, or accept bitcoins from anywhere in the world (Ittay Eyal and Emin Gun Sirer, 2014). The offer of transactions with relative anonymity is a significant financial power and brings changes to the future payment systems. Transactions are made with no banks interfering, so there are no transaction fees.

More merchants are beginning to accept them. Every-one can buy services, goods but also criminals have a way to transfer very their in-come from illicit activities completely anonymously. While Bitcoin developers maintain Web sites providing guidance to the Bitcoin community, they do not have a centralized database or authority.

How anonymous is Bitcoin?

Michael Bedford Taylor illustrates in his study that anonymity, though each bitcoin transaction is recorded in a public log but only the wallet address id, with keeping anonymity for the user and transactions private (Bedford, 2013). This is a significant factor why this is the currency of choice for people online for any transaction that need to be anonymous. Because it never exposes vulnerable account identifiers, illegal activity is supported, like money laundering, terrorist financing or other possible misuse for nefarious purposes. Governments are working with law enforcement that will generally be able to track transactions data left behind by the currency and increase the regulation. The system is subject to massive and increasing central control for the Governments but bitcoin idea is at the other side.

U.S. law enforcement officials have shut down illegal marketplaces that do business by using bitcoins (UNODC, 2011). The virtual bitcoin currency is not supported by banks or government and can be spread between any two people anywhere. Everyone can buy services and goods but also criminals have a way to transfer very their income from illicit activities completely anonymously. Transactions never expose vulnerable account identifiers, illegal activity is supported, like money laundering, terrorist financing or other possible misuse for nefarious purposes. They conduct transactions without the fear of caught from laundering controls.

There is history of attacks at bitcoin’s security. In February a very large bitcoin exchange called Mt Gox, after an attack by hackers. The confiscation of 500 million $ made the investors feel desperate. Also, one of the bitcoin banks in Canada shut down in March after hacker’s defalcation of 670,000$.

U.S. law enforcement officials have shut down Silk Road, the online drug market where cocaine and heroin were trafficked, and arrested Ross William Ulbricht, the site’s owner. Also the Federal Bureau of Investigation seized about $3.6 million in Bitcoin, made it one of the biggest confiscatory in the digital currency’s history (FBI New York Press Office, 2013).

Bitcoin and the Law

IRS will treat bitcoin like property, such as stocks and securities, and not as currency (IRS, 2014). Government intervention through Department of Finance, which is drafting regulations for Canada, expected to be in force next year, doesn’t seem capable to capable to control all the transactions globally. Mostly all governments will follow regulations such as Canada national law on digital currencies but always somewhere in the world criminals will find financial products free of any intervention in the e-currency, government-backed or otherwise.

Bitcoin can be considered “money” as it fulfils the functions of money but it is doubtful that Bitcoin would pass as “money” in many Countries under the Nation-al Currency Law. Bitcoin is ideal for someone who intentionally tries not to pay tax (Jillian Friedman and Joseph Neudorfer, 2014). But for most people who file tax re-turns and report their income whether or not it shows up on a Form, it probably isn’t the tax haven some are suggesting it is. The IRS will surely take steps to regularize tax reporting. What’s more, a Government Accountability Office report says the IRS information to the public for Bitcoin is not enough. People must be informed that they have to pay tax on Bitcoin transactions (IRS, 2014).

Parliament of Canada approved this June the world’s first national law on digital currencies in order check all transactions under national anti-money laundering law. Computer programmers can create code that will cause a chain reaction to the bitcoins transaction system and cause a collision of the system. (Ittay Eyal and Emin Gun Sirer, 2014). Increased pressure on users will only serve to increase the cost of enforcement in the long run.

Most money today is already electronic form (Jung-Wen Lo, Min-Shiang Hwang, Yen-Ping Chu, 2008). The banks aren’t holding a lot of money in there. The money in most accounts is data, binary system numbers 0&1. Bank deposits are in danger because deposits won’t be considered as money but paper investments is decided from G20 and will be announced soon (G20, 2014). Consider how safe bank deposits are. So, not only Bitcoins but all money will be considered the same and will be depending from the economic status of every Country. The existing financial institutions controlled by governments could issue their own bitcoins.

A report by Goldman Sachs predicted that Bitcoin would force banks to compete by lowering their costs and streamlining their systems (Goldman Sachs Group, 2014).

Instead of increasing regulation and trying to predict the next generation of disruptive technologies, it would ultimately be better to understand the technologies and police the points of public contact with existing legal schemes. The safety of deposits at the banks is collapsed and Bitcoin is an alternative of deposit in e-currency in a safe wallet online. Money is dead because bitcoins are not issued by any government, bank, or organization! People trust is difficult to be gained even from e-banking systems from the banks. They prefer to stand in rows at the banks in order to pay bills or collect the pensions when they can accomplish the payment in one minute using e-banking accounts. Production of paper currencies will stop. Every-thing financial will exist in from of data. Bitcoin is capable to change the world. People have a way out from a system that is always working for the governments and the financial institutions that work to collect more taxes for the Government. No more delays in the banks…

Bitcoin and How It Works. (2019, Aug 19). Retrieved from https://studymoose.com/bitcoin-and-how-it-works-essay 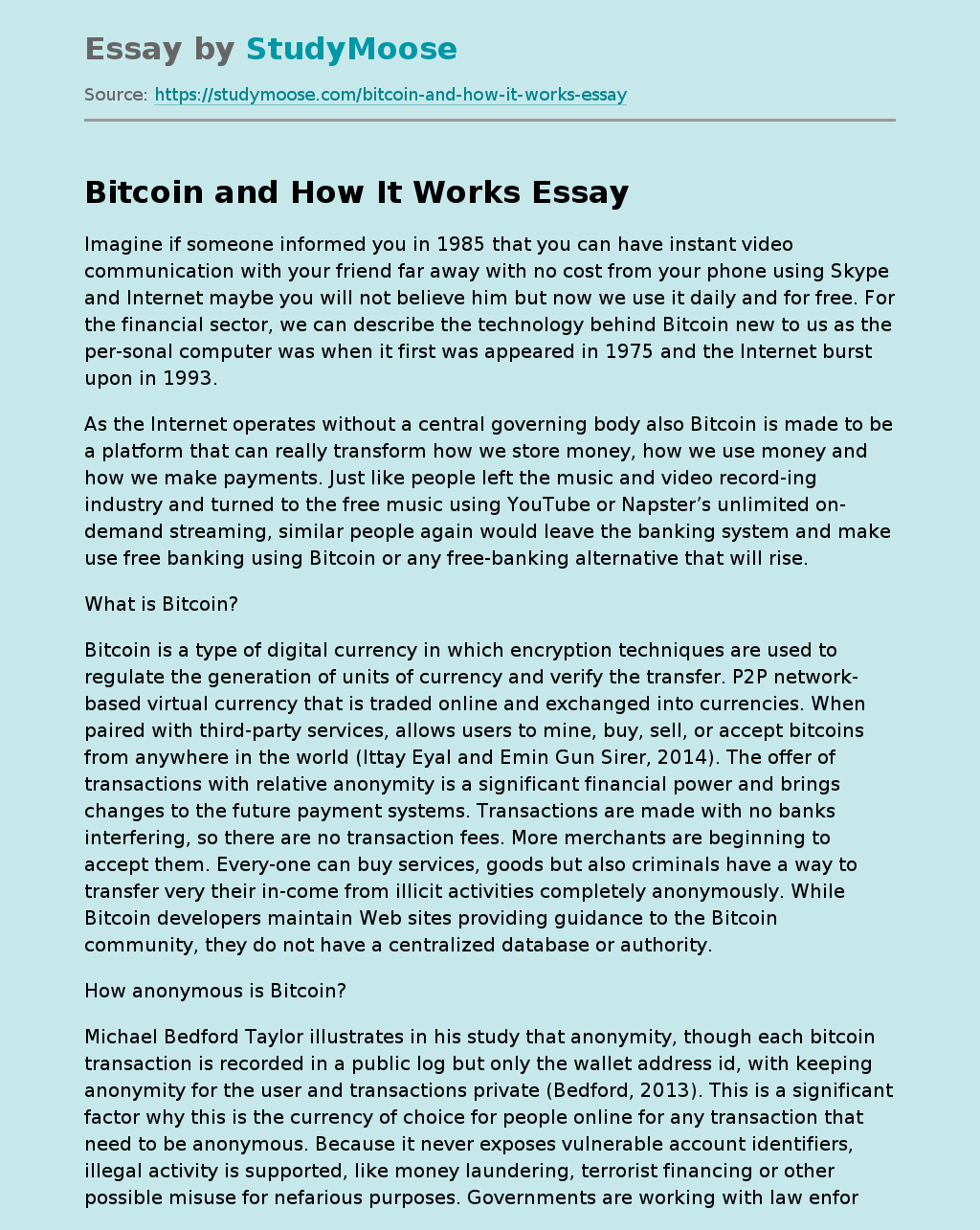