Bitcoin and cryptocurrencies are the new buzzword today, almost everywhere people are talking about bitcoins, especially with the examples that someone has made millions in just one or two years by smartly investing in bitcoins. It definitely creates curiosity to others if it is right or legal to invest in bitcoins or is it just a bubble?

With the market cap of more than $270 billion, the bitcoin gained momentum when its price touched whopping $16,500 last year. It’s not a new concept in fact, Bitcoin has existed since 2009 and was traded at a very low value initially, its growth was also linear for few years but then it picked up an exponential growth.

Don't use plagiarized sources. Get your custom essay on
“ Bitcoin and Cryptocurrency ”
Get custom paper
NEW! smart matching with writer

Bitcoin is not the only digital currency, there are other alternatives like Ethereum, Ripple, Dash, Litecoin, and NEO. So let’s understand the basic of Bitcoin. It’s a digital currency build on top of the block chain technology, It’s also known as virtual currency or cryptocurrency. Its virtual so yu can’t print, touch, feel, or store it. Technically, Its just a sequence of (0s and 1s) stored in some remote computers around the world.

Bitcoin works over blockchain technology, Blockchain is considered one of the most safe technology to store data in a distributed manner. It createa, store, and manage digital transactions that are public, secure, and distributed.

Bitcoin was first introduced in 2009 by an unknown individual or a group named “Satoshi Nakamoto”. It was an interesting way to pay for transactions without a third-party like a bank. It handles peer to peer transactions without any middlemen. There are no transaction fees and both parties are anonymous. Just like an email address, you create a bitcoin wallet account and then that address becomes your identity to be used for every transaction.

Some experts predict that Bitcoin or Cryptocurrency is the future of money and it will eventually replace all other currencies in future. Today, many tech-savvy online retailers accept bitcoins. You can order services like Web hosting, buy merchandise, and even a coffee. Many online ecommerce portals accept bitcoins along with other cryptocurrency options like LiteCoin, and Dogecoin. Some known businesses which accept bitcoins include Virgin Galactic, Overstock.com, TigerDirect, Dish Network, Expedia, Newegg, Directnic, Microsoft, Zynga, Starbucks, and Subway. You might be thinking; why do I need bitcoins If I can buy everything using my credit card?

Bitcoin is a new form of currency and enjoying an exponential growth, Some people believe that the value of bitcoins will keep on growing over time because more and more people and businesses will start using it. People buy bitcoins as an investment vehicle. As a matter of fact, the value of 1 bitcoin has increased from $500 to $16,000 in one year. Its always anonymous transaction when you do it through Bitcoins, Nobody would ever get to know about such transactions and the owner of the money. which lures lots of criminals to use bitcoins for their payments and transactions.

There are several cryptocurrency marketplaces (online websites or apps) called “cryptocurrency exchanges” that allow people to buy or sell bitcoins using different currencies. You can buy bitcoins using your local currency and start buying and selling bitcoins like any stock trade. When you open an account, you get a digital address and that address is your identity to buy, sell, or pay in bitcoins. You can find some popular cryptocurrency exchanges like ,Coinone, Bitthumb, Bitfinex, Quoine, Bittrex, HitBTC, Poloniex, Kraken etc. Bitcoins are managed through your online accounts quite similar to your online bank account,. It is called a “digital wallet”. You can buy or sell bitcoins through your digital wallets.

Bitcoin is a virtual currency and has no tangible value. You can’nt hide it like the real cash with the hope to use it in difficult times. Not everybody accept the bitcoins.. Bitcoin value fluctuates a lot. Even though the value of bitcoin is going higher, it doesn’t mean it will not go down. There may be a day, when bitcoin can go down 50% in just matter of hours. Some experts have even predicted that Bitcoin is a bubble. Because bitcoins are stored in digital wallets , more and more hackers will target bitcoins as the value grows. there have been many hacks into these wallets and bitcoins have been stolen.

Bitcoin is not owned by a country, group, or person. Bitcoin is owned by users of bitcoin. Initially, new bitcoins have to be mined and the miners get some bitcoins, those later can be sold to other people. Bitcoin mining is also a interesting concept. There is a limit on total number of bitcoins, which can be produced. there are only 21 million Bitcoins that can be mined in total. Out of which 16 million bitcoins are already mined. The successful miner finding the new block is rewarded with newly created bitcoins and transaction fees. By last year, the reward amounted to 12.5 newly created bitcoins per block added to the blockchain. To miner can claim the reward through a special transaction called a coinbase. All bitcoins in existence have been created in such coinbase transactions.

Today, many large institutions and crypto leaders have invested heavily in Bitcoin. As a matter of fact, 4% of people own 96% of bitcoins. Bitcoin is not regulated or backed by any country or government. It is private peer-to-peer transaction. All parties in bitcoin transactions are anonymous. Bitcoin is not illegal but it has been regulated in some countries. Now, then Most people buying bitcoins for investment purposes are assuming the value of bitcoin will continue to grow. Some people use bitcoins to buy and sell products and services to hide their identity. 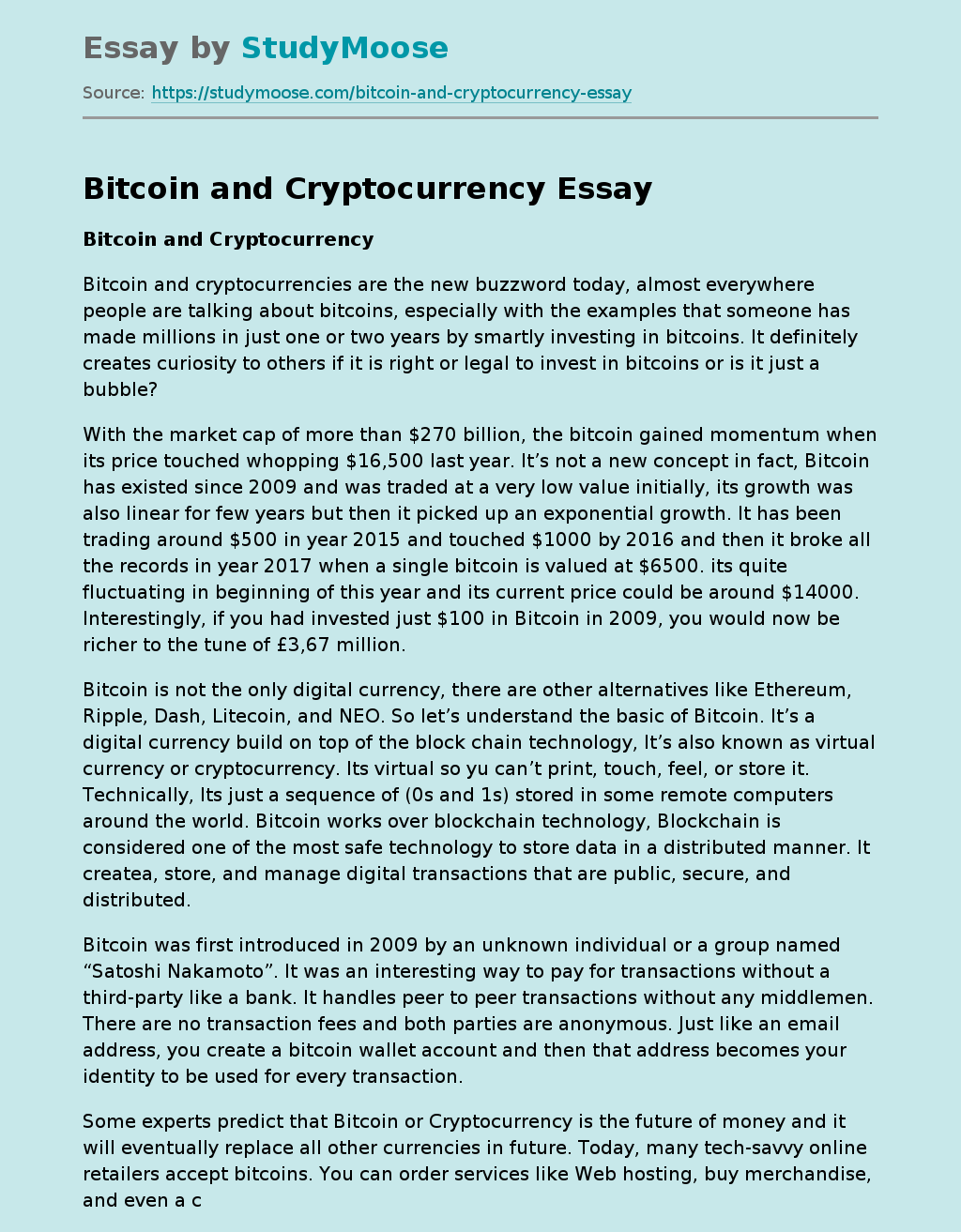