Birch Paper Company is a medium sized, partly-integrated paper company. It produces white and craft papers and paperboard. It has four producing divisions and a timberland division – The Thompson division converts the paperboard output into corrugated box and prints and colors the outside surface of the box. The Northern division produces the paper box, while the Southern division supplies the corrugating medium and inner and outer liners. Timberland division supplies part of the company’s pulp requirement. It has been the company policy of decentralization to allow the divisions to act independently in all the affairs of their divisions except for the broader company policy, each division is judged on the basis of its profit generation and return on investment figures.

Turn in your highest-quality paper
Get a qualified writer to help you with
“ Birch Paper Company Case Solution ”
Get high-quality paper
NEW! AI matching with writer

Each division is free to buy from any supplier he wished, and even for dealings within the company, divisions were expected to match the market price if they wanted the business. This policy according to the company’s top management has worked well and delivered the desired results.

The Northern division had designed a special box in collaboration with the Southern division with Thompson’s staff perfecting the design and production methods over several months, the Thompson division was reimbursed for its effort according to the agreement between the two divisions.

The Northern division has asked for bids for the development of the boxes from the Thompson and two outside companies, Thompson quoted a price of $480 a thousand, West Paper Company a price of $430 a thousand and Eire Papers Inc a price of 2 a thousand.

If Thompson gets the order, it would buy linerboard and corrugating medium from the Southern division. If Eire Papers win the bid, they have agreed to buy outside liner from the Southern division and print their boxes from the Thompson division. The manager of the Thompson division is adamant on its bidding price, it includes the full 20 percent overhead and profit charge and its manager feel that his division is entitled to the profit having done the development work on the box and having received no profit.

In Birch Paper Company, each division is judged by the profit it generates and the return on investment to the capital invested in. This model has delivered results in line with the expectations from the top management. Except for the overall company policy each division is authorized to take all the decisions independently including the purchase and sales within the company divisions. In absence of any directive from the top management, the Northern division will accept the lowest bid of $430 from the West Paper Company for it will be the lowest and will be in the best interests of the Northern division, but not necessarily of the Birch company as a whole unit.

Accepting this bid will mean no business for the Thompson and Southern divisions at all, which already are not in a good financial state. Calculation of cost with the Northern division and Company perspective $480 bid from Thompson division is the highest and will increase the cost price of the Northern division drastically. It is competing in a highly competing market and buying at this price will mean compromising heavily on its profits. But this deal will be a boost to the fortunes of the sick Thompson division, it will make some profit and will add some positive to its balance sheet. Also it will give business to the Southern division. The overall cost to the company will be lowest in this deal, $288. Deal will be in benefits of the Birch company but that will come at a cost paid by the Northern division. Also this might create problems in the future, divisions might be tempted to go for higher bids when bidding for the internal divisions order. $432 bid from the Eire Papers is also the along the same line as that of the West Papers, it is competitive and matches the going market price. The deal will bring some business to both the Thompson and Southern divisions of the Birch company. But here also the cost to the company, $391, will be much higher from that of Thompson’s bid. There is one major issue concerned with the operations of the Thompson division, whether it is operating efficiently.

The other bids from the external competitors are as per the market price, Thompson’s bid of $480 is too high as per the market standards, it is $50 higher than the lowest bid, also the manager of the Thompson division is adamant on not lowering the bid price, this raises the question whether the division is operating efficiently, this is just one deal, how it will compete in the open market space with the other competitors. The Vice President finds it odd that the manager of the Thompson division has added the full overhead cost and the profit margins to the bid price, which could have been more competitive. Also, the Southern division is operating at the market price although it is also facing the similar problem of under utilization of its full capacity. He has to take into account concerns of the company and also at the same time ensure that the divisions’ performance is not negatively affected by his decision.

If he orders the acceptance of the Thompson’s bid, it would be unfair to the interests of the Northern division and also set the wrong precedents for the future actions of the divisions, although the deal volume is less on a relative scale, but its implications will affect the operations of the divisions, divisions will be tempted to bid higher than the market price when dealing with the internal divisions and this will be determinant to the overall interest to the company. He has also to see that the deal is fair to the other divisions as well, the Thompson and Southern divisions are in dire need of the business and it is in the interests of the company that they keep running profitably. The total cost to the company should be low. The commercial vice president is facing this unusual situation, where he has to decide whether to intervene into, and if yes what should he do and how?

He has a lot of options with him as to what to do, and to decide which is the best option is the problem faced by the Vice President. It has been the company’s policy of decentralization as to not intervene in the daily affairs of the divisions. But at the same time the Thompson division is struggling to make profits, acceptance of the Thompson bid will make the Northern division lose out to the competitors. To decide as to what action to take keeping in mind the best interests of the divisions and the company is the decision problem faced by the Vice President of the Birch Paper Company. Decision criteria

Below mentioned points should serve as the criteria to the decision to be made by the Vice President. 1.Divisions remain competitive in the market.  It is the most important criteria, one division cannot be made profitable at the cost of the other, other divisions have to improve their efficiency as per the market standards, the decentralized model has worked well and delivered the results, and all the firms should operate as per the market standards. Efficiency and competitive spirit of the divisions should not be compromised with.

2.Ailing divisions are being taken care of.

It is in the interests of the company that all the divisions remain healthy, they are given enough boost to remain competitive in the market. For this it is imperative that they are getting business.

3.Long term interests of the company are not compromised.

Any action that the Vice President takes is bound to have some short term and long term implications, it should be ensured that the decision ensures that in the long term the company and the divisions are to gain from it. The action should not encourage the divisions to continue with their inefficient practices, instead it should encourage them in the long run to generate profits on their own without expecting any special favors from other divisions. Alternatives

This decision will give a boost to the operations of the Thompson and Southern division. They were in dire need of the business, also the cost to the company will be lowest in this case. This will satisfy criteria no 2. But this action will be against the interests of the Northern division, it’s cost price will increase thus leading to fall in profits, it will not remain competitive in the market. This will not satisfy Criteria no 1. This deal is bound to have some long term implications, in the future operations the divisions will be tempted to raise their bids when bidding for the other divisions order in hope of being selected over the competitors, this will promote inefficiency culture in the divisions and the competitive spirit of the division will be negatively affected by this decision, it will not satisfy the criteria no 3.

No intervention on part of the Vice President will prompt the manager of the Northern division to accept the lowest bid of the West Papers, this will ensure that the Northern division remains competitive in the market, and also the other Thompson division will be forced to align its price to that of the market, to improve its efficiency and compete in the market on equal lines. This will satisfy criteria no 1. This bid will mean no business for the Thompson and Southern divisions, their condition will only get worse with it, their fixed costs will remain fixed and it will also hurt the interests of the company as a whole. This will not satisfy criteria no 2. The deal long term implications will not have any adverse effect on the operations of the divisions, the divisions will be expected to match the market price and it will promote the competitive spirit among the divisions. This will satisfy criteria no 3.

They will generate some profit for them, this will certainly give some boost to their operations, although the quantum will be much lesser than it had been when the Thompson bid was accepted. But, nevertheless this will satisfy criteria no 2. This decision will positively encourage other divisions to keep the interests of the other divisions in mind when the cost of implicating it are not high, it will ensure competitive nature of the divisions, in the long run all the divisions and the company is bound to gain by this division. 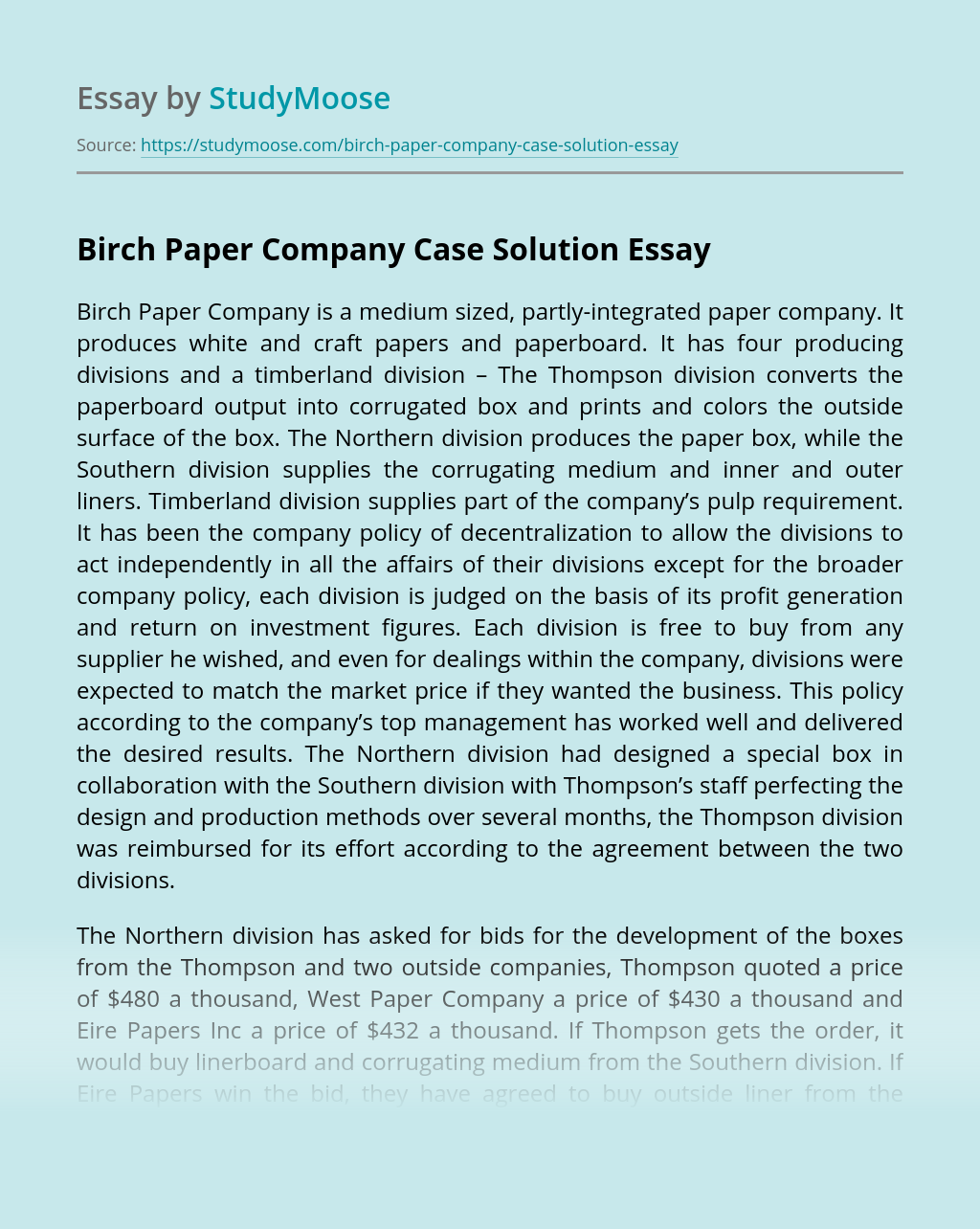 Turn in your highest-quality paper
Get a qualified writer to help you with
“ Birch Paper Company Case Solution ”
Get high-quality paper
Helping students since 2015
Stay Safe, Stay Original