Basketball is a very competitive and popular sport in our society today. The NBA playoffs are going on right now and it has proved to be a very physical and intense post season. This sport takes an extreme amount of talent, coordination, and athletic ability to become a champion. There are a few biomechanical principles that are present during the game of basketball that help these athletes become great.

The first biomechanical principle that is present in basketball is Newton’s Second Law of Motion.

Don't use plagiarized sources. Get your custom essay on
“ Biomechanical Principles In Basketball ”
Get custom paper
NEW! smart matching with writer

This law deal deals with acceleration in the sport. The law states, “The change in motion of an object is proportional to the force impressed; and is made in the direction of the straight line in which the force is impressed”. Newton’s Second Law is applied to the dunking aspect of basketball. When a player is about to dunk the basketball a certain amount of force must be produced to jump. Also a certain amount of acceleration must be produced to send the player upwards towards the rim.

If this does not happen then the player is going to not be able to dunk the basketball. The weight of the athlete also plays a big role in this action as well. A player who is heavier is going to have a harder time jumping as high as a player with less mass.

The next biomechanical principle I found that deals with basketball is another Newton law. Newton’s First Law deals with the law of inertia.

Lastly frictional force is another biomechanical principle that I found present in the game of basketball. The friction between the athlete’s shoes and floor must be very high. Static friction is used when the player wants to push off from the floor to make an athletic move. The type of shoes that the athlete wears is also going to play a huge role in how affective the players’ moves are. Frictional for occurs when the player pushes down and backward on the floor. It is the force that acts forwards on the player and backwards on the floor. If it was not for frictional forces the athlete would not be able to start or stop his or her motion.

In conclusion I found this biomechanical breakdown to be very interesting. Now that I have taken this course I look at sports from a greater biomechanical perspective. I feel that taking this course will really pay off as I become a professional in the field. Being able to break down sports into such a perspective is a great attribute to have as a future professional. 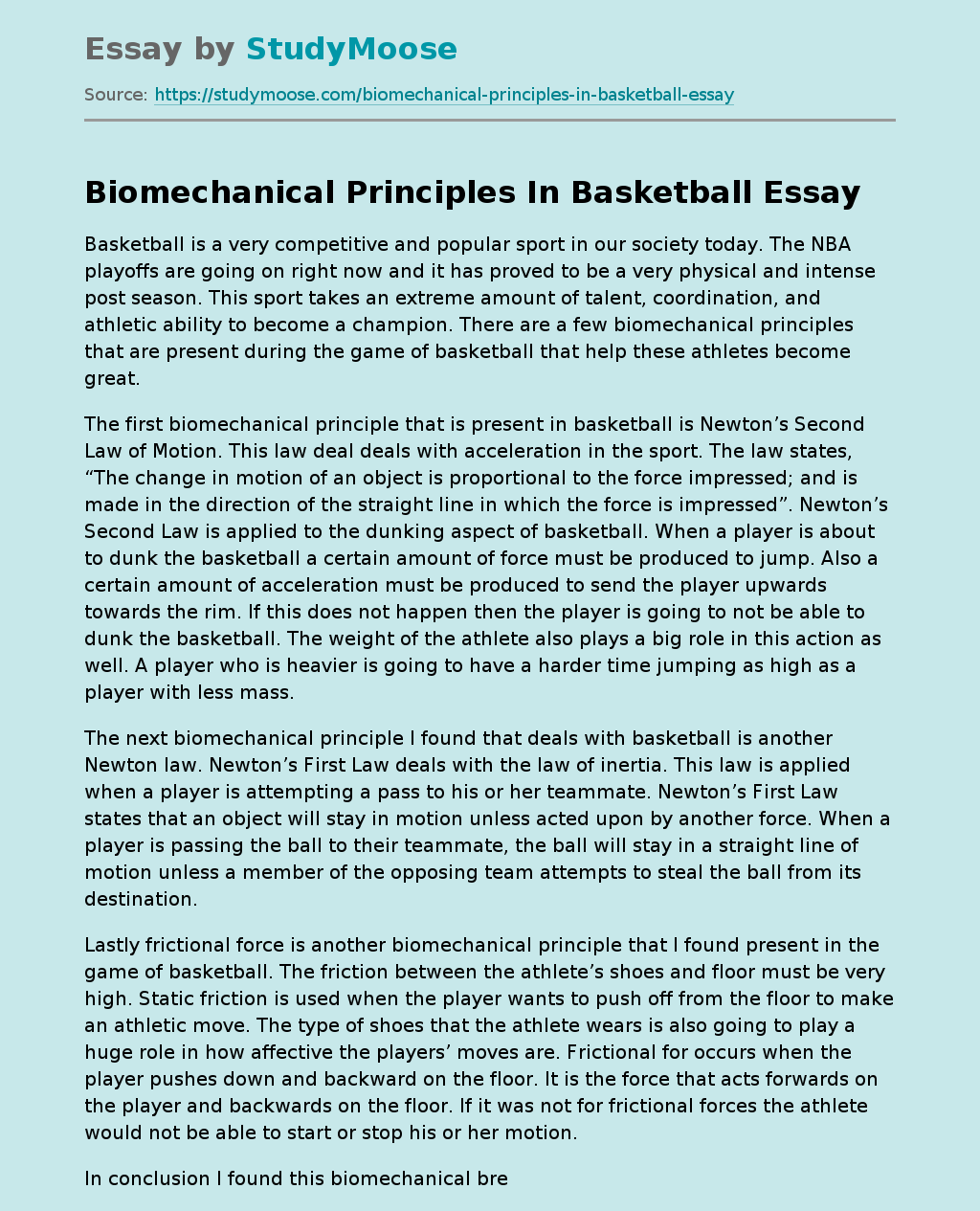