Current conversion strategiesBiomass basically is the fourth largest source of energy in the world wide. In developing countries biomass has a weightage of 35% as a primary energy and worldwide its contribution raised to 14% and is being expected to raise further. Despite the environmental challenges which we are experiencing, composition of food waste make it a very attractive value added product. In recent years it has been recognized that the food waste is a charismatic resource that used for generate energy in the developed countries.

Don't use plagiarized sources. Get your custom essay on
“ Biomass to Energy Conversion Technology ”
Get custom paper
NEW! smart matching with writer

Thus the energy recovery for the food waste is an attractive option to enhance the economic conditions of a country.

McKendry (2002) reviewed various biomass-to-energy conversion technologies, but there was no specific emphasis on the use of food wastes as feedstocks. In the current review various technologies have been developed for food waste to energy conversion including biological methods (e.g. anaerobic digestion and fermentation) , thermal and thermochemical technologies (e.g. incineration, pyrolysis, gasification and hydrothermal oxidation).

This article will discuss different technologies that can be opted to cope environmental burden. In addition we advocate future direction for more virtual way of treating food waste for renewable energy generation from the resource recovery viewpoint. Bio chemical conversion processBiochemical conversion is a process in which biomass is converted into bio gas (CO2/CH4) by manipulating microorganisms. Biochemical process is non-polluted method designate due to low energy consumption. It is also a convenient process because it reduce the atmospheric carbon dioxide levels. Two main processes are evolved, fermentation and anaerobic digestion (AD).

Fermentation process is used commercially on large scale for the production of ethanol from waste food. The best known source of ethanol is sugar cane but other material can be used, including wheat and other cereals, sugar beet, Jerusalem artichoke and wood. Starch based biomass is competitive as compared to sugar based materials but requires additional process. However cellulose materials such as wood and straw are the expensive for the preparation of ethanol.Typically, sugar is withdrawn from the biomass crop by squeezing mixed with water and yeast and kept warm in large tank is known as fermenters. The yeast impart sugar and converted into methanol. The distillation process required remove the water and other impurities from the mixture. 95% of ethanol is produced and condensed into the liquid form. Anaerobic digestionAnaerobic digestion is a process in which decomposition through bacteria in the absence of oxygen. The product formed by the decaying process, in the absence of oxygen is known as biogas.Anaerobic digestion has many enviourmentally friendly for the production of renewable energy and minimize the waste. Food waste is mixed with water which is stirred and warmed inside of airtight container (Digester). The size of digester is one meter cube for a small household unit to as large as 2000 meter cube for a commercial installation. [2]. However 20-40 days required for the microbial reaction.The turning efficiency from the biomass to electricity is about 10- 16%.

IncinerationBy using the incineration technology we get heat and energy by combustion and conversion of waste materials. The heat from the combustion process can be used to operate steam turbines for energy production, or for heat exchangers used to heat up process streams in industry (Autret et al., 2007; Stillman, 1983 ) . Incinerators are minimize the volume of food waste 80- 85% and also reduce the volume. By using earlier technologies and methodologies toxic air emission contains dioxins and heavy metals are produced. Combustion of food waste create many environmentally problems. The improvement of combustion technologies many new plants have been installed in different countries. Solid waste combustion is now considering an integral part of electricity production because it reduce the dependency on fossil fuels.

The conversion of food waste into energy and heat is done by incineration. The food waste is dried after this burnt the MSW at 850 —C to 1100 —C .Average electricity consumption for the drying process was evaluated to be at 649 KW h which is equivalent to 27,920 Mj of energy per tons of food waste. It is concluded that dryer incineration process is the best process to recycle the food waste but the recovery of energy from the incineration process not always feasible due to energy loss to evaporate the large water content of organic wastes. In another study, Caton et al. (2010) investigated energy recovery from post “consumer food waste by direct combustion. The result shows that energy recovery from food waste is an effective method, cost saving process and reducing disposal costs.

Pyrolysis is the thermochemical process in which the biomass is converted into liquid (bio “oil), also produced the non-condensable gases (acetic acid, methanol) by heating the biomass at 750K in the absence of air. If the flash pyrolysis are used the bio-oil is produced. The conversion of bio mass to crude oil have the efficiency up to 70% for the flash pyrolysis processes and this bio crude can be used in engines and turbines. Some problems in the conversion process and use of oil need to be control. Poor thermal stability and corrositivity of the oil are evolved.Biomass is heated in the absence of oxygen to produce the hydrocarbon rich gas mixture and a carbon rich solid residue. In the developing countries the solid residue produced that is charcoal, which have high capability of energy produced as compared to original fuel, and ideal for domestic use.

Chemical decomposition through pyrolysis is the same mechanism used to refine crude fossil fuel oil and coal. Biomass conversion by pyrolysis has many enviourmental and economical benefit over the fossil fuels. Charcoal was the main fuel product and methanol production 1-2% of volume or 6 gallons per tons. In 1927 the traditional method was replaced with synthetic process. The synthetic process utilize a pyrolytic reactor, operating as a gasifier by introducing the air into the reactor the biomass completely burn and converted into ash. The energy released during this process in the gaseous form. After purification the syngas, hydrogen, and carbon monoxide in a 2 to 1 ratio is altered by catalyst under high pressure and temperature conditions to form the methanol. This method produced 100 gallons of methanol per tons.If the aim to enhance the yield of the fuel gas from pyrolysis , high temperature ,low heating rate ,long gas residence time would be elected. Type (kg VS/m3 kg day) (days) (m3/kg VS) 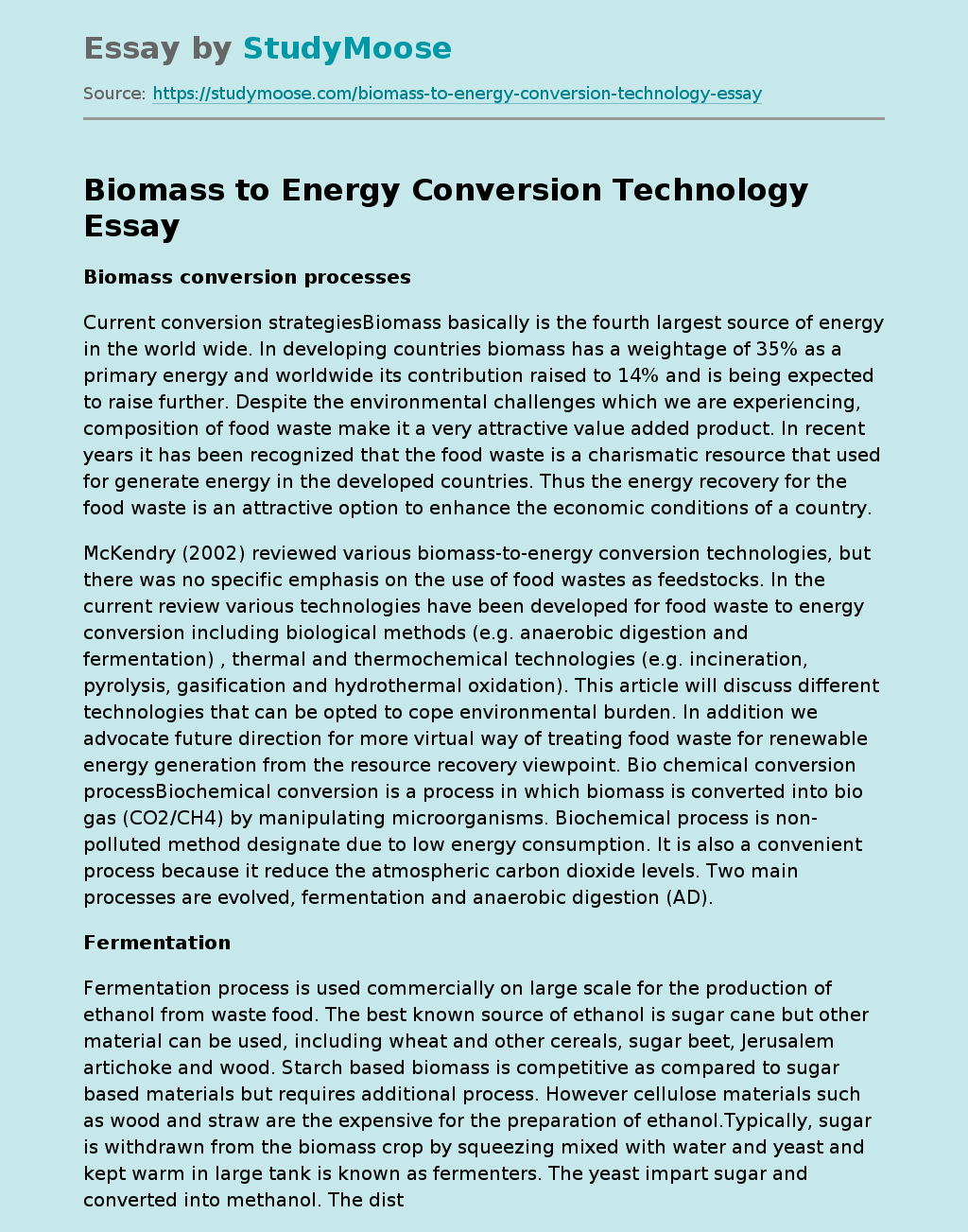