Jose Rizal’s full name is Dr. Jose Protacio Rizal Merchado Y Alonzo. He is the 7th out of 11 children he is born in June 19 1861 His birth place was calamba, laguna his nationality is Filipino he has 10 or more languages known his contributions are El Filibustirismo , Noli Metangere and the last that he wrote is Mi Ultimo Adios he is the founder of Laliga Filipina and the their news paper la solidaridad he did because of faithfully defending for our nation.

Don't use plagiarized sources.
Get Your Custom Essay on Biography of Jose Rizal Our National Hero Just from $13,9/Page

Dr. Jose P. Rizal became our national Hero because he was able to defend and fought the Spaniards for our country through his books like NOLI ME TANGERE (March, 1877), EL FILIBUSTERISMO (Sept. 18, 1891) AND MI ULTIMO ADIOS (1986)

Why we study Rizal

As a Filipino we need to study the life of Rizal not just because he is our National Hero but because his life has great things to share to each and everyone.

And as a student who took up the course of Education, studying Rizal will help us to teach our future students who will need the same knowledge and learning that we are looking forward today.

El Filibusterismo, also known by its English alternate title The Reign of Greed, is the second novel written by Philippine national hero José Rizal. It is the sequel to Noli Me Tangere and like the first book, was written in Spanish.

That came from the Bible. Jesus said that to Mary Magdalene, when she tried to touch Him when He rised from the dead. Jose Rizal used that phrase as a title because first, he read the bible himself. Second is he used it as a figure of speech. The title simply meant, “If you touch me, I will fight back”. Our teacher in Philippine literature said in our class once that he compared the Philippines at the time of the Spaniards as a cancer patient. And that cancer patients are pretty hostile. When touched (which oftentimes feel very painful for them) would be mad at the one who touched him. Jose Rizal used this as a message to the Filipino people. He was encouraging Filipinos to stand up and fight back. 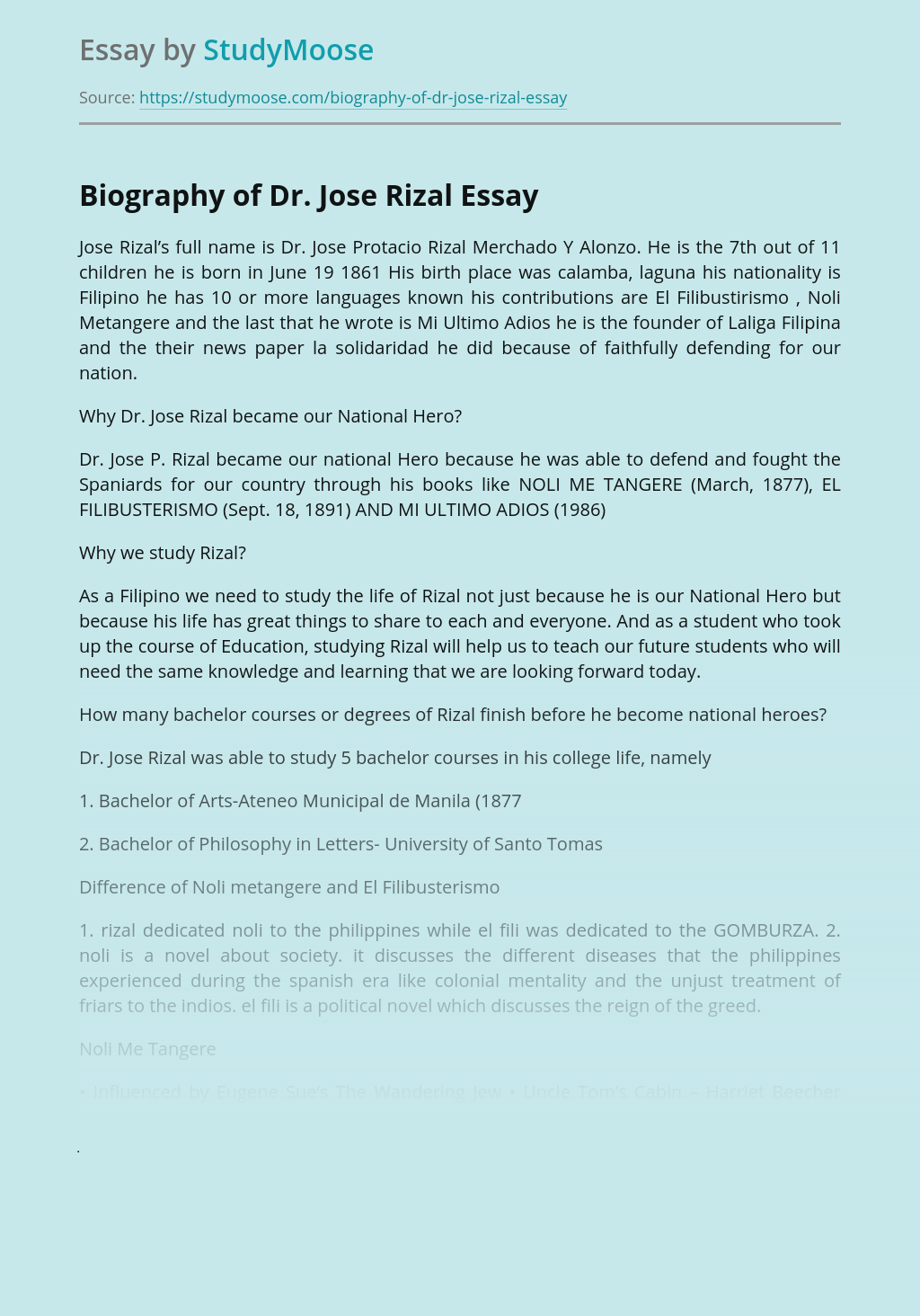 Leadership of Our National Hero Rizal

Rate this post “Does Rizal deserve to be our national hero?” This article written by Renato Constantino, is all about Rizal that does he really deserves to be a hero or not? The author compared Rizal to others national heroes in different countries, who is most decisively active in the fight for their freedom and...

Review on Film About National Hero

Rate this post That documentary was quite intriguing especially the thing about Saturnina and her uncle Jose Maria.It got me thinking for an hour or two because if it was true it would be a disgrace to the family. The events links together; Saturnina got pregnant, her mother, Theodora took her on a long vacation...

Get Essay
Role of Quaid-E-Azam in Creation of Pakistan

Rate this post A man, the towering personality in the history of India, a man who is regarded as Patriotic saint, who has earned the name and fame not only in India but also on other side of sea, a man who created a cyclonic forces among Indian youth to revive the true spirit of...

Rate this post Constantino describes the shallow knowledge of Filipinos about Rizal and Nationalism. Because of the developing time and world, many Filipinos do not have enough knowledge and knowings about it. They are not aware of what the history has brought us. A little thankful that I will know, where is my part of...

Rate this post Dr. Jose Protacio mercado rizal y alonso deserves to be the country’s foremost national hero because of his achievements. He knew that by writing the noli me tangere and the el filibuterismo thereby exposing the injustices committed by the civil and clerical officials would put his life and his family’s life in...

Jose Rizal Personality and His Retraction

Rate this post Dr. Jose Rizal has been a national iconic hero for over a hundred years. He has been the symbol of our country’s freedom, the epitome of nationalistic patriotism. He emanates martyrdom with every fiber of his being and everything else that he left the country to strive upon. His story has been...

Rate this post Fort Santiago is part of the walled city in Manila called Intramuros. José Rizal, our national hero, was imprisoned in the fort before his execution in 1896. But who would have thought that every piece of these Hispanic stones witnessed one great event in the Philippine history. Now, let’s walk into one...