Biographical Approach to Kate Chopin’s “The Story of an Hour”

Literature is always said to be the echo of life. It reflects the time, the mind’s state, and author’s life. Whenever one looks into any literature piece, they do not only read what is on the text but also try to understand the context that matters. These contexts include the life of the author, the era it was written, the social condition during the time it was set, and others. There are many ways in which a literary piece can be read and interpreted.

Don't use plagiarized sources. Get your custom essay on
“ Biographical Approach to Kate Chopin’s “The Story of an Hour” ”
Get custom paper
NEW! smart matching with writer

The act of interpreting a literary text is called literary criticism.

This allows the reader to understand elements employed in the work, plus to relate works to authorial meaning and readers.

In this paper, the researcher also attempts to give assessment in life to her short story, and to the main character of the short story “The Story of an Hour”.

Horward (2005) states that Katherine O’Flaherty, also known as Kate Chopin, was one of the most renowned female writers of her time. Her universal themes are what made her extraordinary. She wrote several short stories including “The Story of an Hour”, “Euphrase”, “Mrs. Mobry’s Reason”, “A Shameful Affair” and many others. Kate Chopin was raised into a home of women in St. Louis. This had been a very big influence to her writings, mainly on her views about feminism – views about women. Chopin was later widowed at 32, and there she started writing for herself and for her six children.

Chopin was an extensive reader that is why she was able to write stories of herself into creative ones. In the early 1970’s, it was the resurrection of women’s rights movements, and Kate Chopin was one of those contributors to the occurrence. She contributed a lot with her writings about women, daytime dramas, the feminine mystique, women’s liberation, Mars vs. Venus, self-help and open marriages. Definitely, Kate Chopin’s early experiences had a great influence on her writings. One of her celebrated short stories is “The Story of an Hour” and it is entirely famous not only in American Literature – but also in the world.

While reading the short story, the reader finds connection between the life of the author and the life of the main character of the short story. These connections are the similarities that the reader had taken into consideration: Chopin and Her Father’s Loss One of the main events in the story is a loss of someone very important, more particularly, Mrs. Mallard’s husband’s loss. Josephine, Mrs. Mallard’s sister, had brought the sad message that there was a railroad disaster and of those listed as ‘killed’ was Brently Mallard, who was Mrs. Mallard’s husband.

In Kate’s life, she had lost someone too, in a railroad accident in 1855 to a train accident. A Widow Mrs. Mallard is sooner or later, assumed to be a widow, but readers will soon find out that Mr. Mallard is alive. In Kate’s life, his father had widowed her mother. Both experienced having lost someone very special and as well as being widowed but definitely, their responses to the loss may entirely be different. In the end, before she would have learned about Brently’s return from the accident, Louise died of heart disease – of joy that kills. This suggests that she had a monstrous joy, because it killed and consumed her to death.

Perhaps, Chopin would just let Louise die instead of seeing Brently again, wherein she will be living like a prison again. Freedom for Women In “The Story of An Hour”, Chopin has made no suggestion to the readers that Mrs. Mallard was sorry for her husband’s loss. Instead, she has uttered ‘over under her breath’: “free, free, and free! ”, which suggests how happy Mrs. Mallard is to have lost her husband, because she has now freedom of herself. The joy she senses in possessing her freedom is something which consumes her. In Kate’s life, she was used to write about resurgence of women’s rights.

She experience a period when there was this declined and confinement of women’s public needs like education, the vote, rights to her own property and her own children. Those events drove her to write this kind of feminist text instead of choosing other universal themes. Briefly, the title of this novel, “The Story of an Hour” is a image of the feelings provoked by the main character, Louise Mallard. In connection to this, it can be confirmed that this novel is a reference to Kate Chopin’s life since most of the events in Louise’s life are similar, or at least made a great influence to that of the story, “The Story of an Hour”.

The biographical approach made by the researcher accomplishes its purpose because an understanding able of the issues behind the book went through by tracing the history and life of Kate Chopin. Literature can bring us to the world of the author. Therefore, this research established that literature reflects the time, state of mind, and the life of the author through understanding the connection between Kate Chopin and Mrs. Mallard in the short story, “The Story of an Hour. ” References:

Biographical Approach to Kate Chopin’s “The Story of an Hour”. (2016, Sep 22). Retrieved from https://studymoose.com/biographical-approach-to-kate-chopins-the-story-of-an-hour-essay 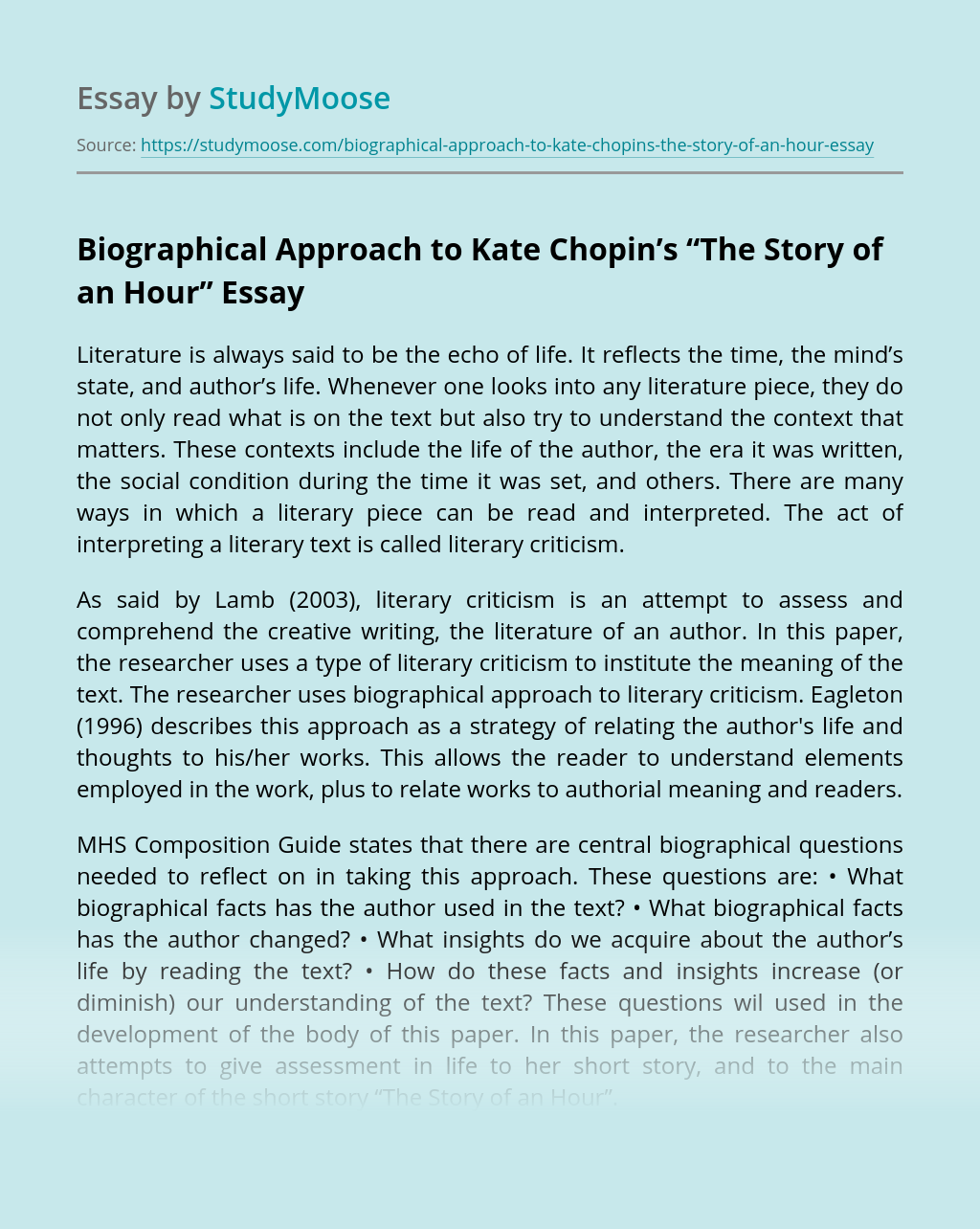