In the play Billy Budd, the author, Hermann Melvinne, creates two conflicting character personalities which are portrayed as good and evil. John Claggart (Master-At-Arms) tries to destroy Billy Budd because he is jealous of Billy’s reputation and acceptance among the crew. There is also a conflict involving Captain Vere when he is forced to decide on the fate of Billy Budd after he kills Claggart. Billy is a handsome, young sailor, new to the ship and eager to impress. Billy becomes very popular with the crew.

Don't use plagiarized sources. Get your custom essay on
“ Billy Budd: Good and Evil ”
Get custom paper
NEW! smart matching with writer

When seeing Billy accepted by the crew it reminds him of the their dislike for him and he becomes jealous. The Dankster’s conversation with Claggart also shows his fear that he will lose the power he held from the fear of others when he says ? they turn from hating you to loving him, and leave you impotent’. Claggart becomes determined in destroying Billy’s reputation. Claggart ? lives on hurting people’ and his evil nature prevails through his attempts to bring down Billy throughout the play such as when he orders Squeak to ?

put that new seaman Budd on report’ and when he lies to the captain and falsely accuses Billy of starting a mutiny.

Billy is innocent in a sense that he has done no wrong which leads to his blind and naive view of evil. The Dankster tries to warn Billy that ? nobody’s friend is Jimmy-Legs’ and by saying ? he is down on you’ but he does not see Claggart to be a threat of any sort.

Billy’s innocence and devotion to good do not let him see the evil in Claggart whom is trying to destroy him but eventually conflict resulting in the murder of Claggart from a blow by Billy.

Billy’s retaliation leads to another conflict between good and evil where Captain Vere must decide Billy’s fate after he commits a crime punishable by death after killing Claggart. Vere likes Billy’s character and would not like to see Billy put to death. Vere accepts that Claggart provoked Billy’s retaliation by lying and can see the evil in Claggart but also recognizes the call of duty which at war-time was non-tolerable for such an offence. Vere is troubled with the conflict of conscience and duty and under the circumstances of war he does what is right and has Billy hung.

Captain Vere loves Billy and has no problem with him in any way but finds where authority has evil it will command. In conclusion Billy was innocent but by failing to see the evil which was upon him he became unable to protect himself from it, being Claggart, who held an authoritarian position higher than him. Captain Vere was also exposed to evil through Claggart by not stripping him of his rank before he began to provoke Billy which then lead to Vere’s decision to put Billy to death. Therefore even the good exposed to evil in a position of authority will sarcome to evil retaliations. 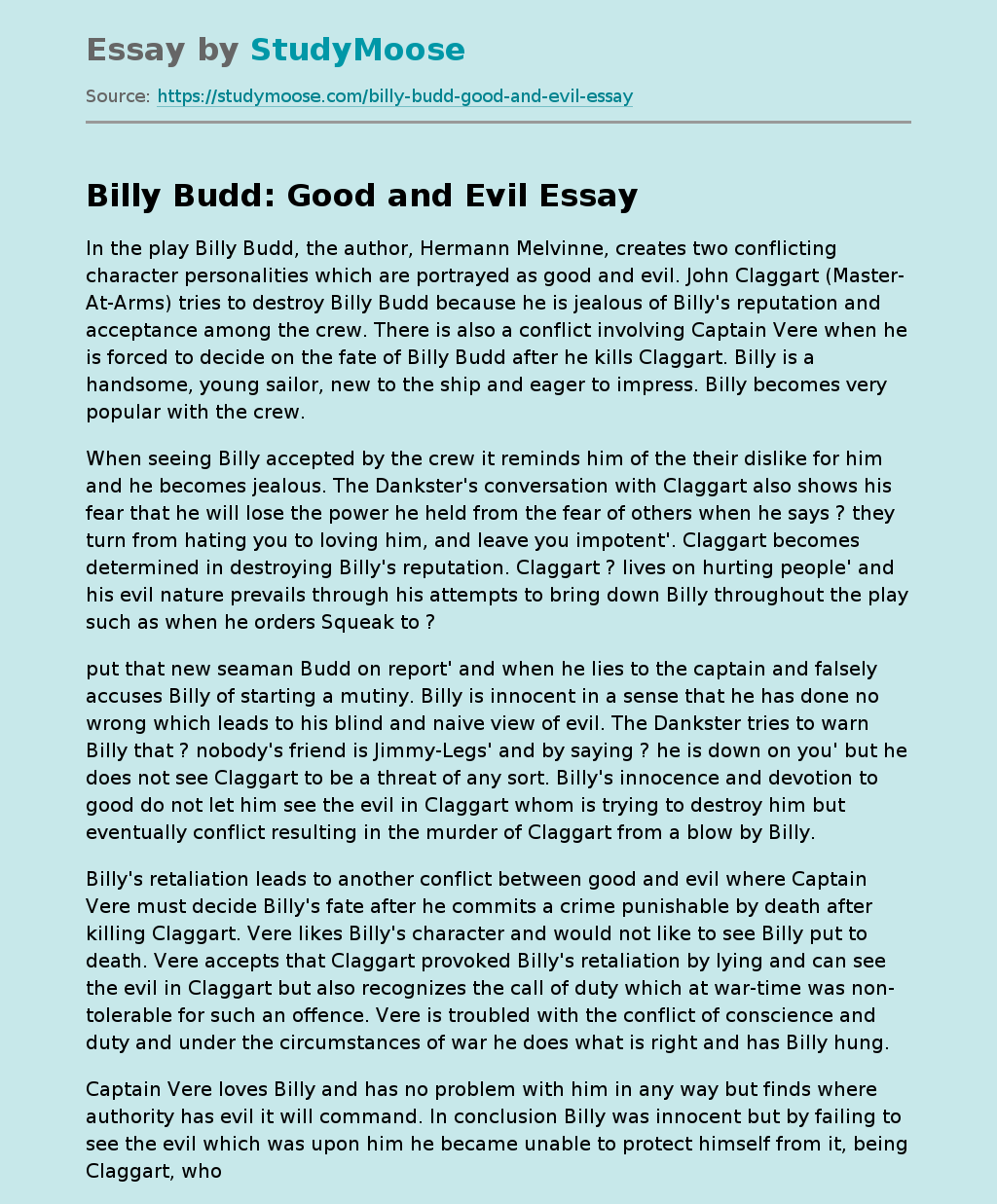