Bill of Rights: American Rights in Relation With the Government

A Government of Laws the United States Constitution is the premier law of the whole nation. It is composed of seven different articles and twenty-seven amendments. Among the 27 amendments, the first 10 amendments are known as Bill of Rights and the remaining 17 are known as the reconstruction amendments. Thereafter, the federal government comprise of three different branches; were the first one is legislative, second one is executive, and the third one is the judiciary system.

The legislative makes all the rules and regulations for the country whereas the executive system executes the law and the judiciary system interprets and examines the same law.

Don't use plagiarized sources. Get your custom essay on
“ Bill of Rights: American Rights in Relation With the Government ”
Get custom paper
NEW! smart matching with writer

According to the state representative I.e. the US Senate, the constitution’s first three words ‘‘we the People’’, declares that all the people create the constitution and the government of United States exists to serve its citizens and nation. In the Yale Law Journal, Bruce Ackerman says that, “we the people” is the powerful trope. He also adds to his statement and says that, ‘We the People’ can amend the written constitution by means other than those provided by article V, and what’s more, the people have done so more than once.

Talking about bill of rights, it includes the first ten amendments.

The Bill of rights is all about the American rights in relation with the government. It talks about the civil rights and liberty of every people. Firstly, the first amendment explains about providing several right protections. This includes expressing ideas through speech and press to assemble with a group to protest and to claim the government to fix problems.

Beside this, it also emphasis in protecting the right to religious beliefs and practices. Similarly, the second amendment provides US citizens the right to bear arms that can be exercised through only militia organizations like National Guard. Likewise, the importance of third amendment is to prohibit soldiers from temporarily residing in private homes during peace time without getting the permission and consent of the owner. Talking about fourth amendment, it provides that the right of people to be secure in their person, houses, papers, and effects, against unreasonable searches and seizures that shall not be violated. Then, the Fifth Amendment provides several protections for people accused of crimes. It states that serious criminal charge must be started by grand jury. It also supports that a person cannot tried twice for the same offense or have property taken away without just compensation.

People also cannot be imprisoned without due process of law. The Sixth Amendment provides additional protections to people accused of crimes, such as the right to a speedy and public trial, trial by an impartial jury in criminal cases, and to be informed of criminal charges.. Furthermore, the seventh amendment extends the right to a jury trial in federal civil cases. And the eight amendment bars excessive bail and fines and cruel and unusual punishment. The ninth amendment explians that listing specific rights in the Constitution does not mean that people do not have other rights that have not been spelled out. Finally, the tenth amendment states that the Federal Government only has those powers delegated in the Constitution. If it isn’t listed, it belongs to the states or to the people.

Bill of Rights: American Rights in Relation With the Government. (2021, Mar 09). Retrieved from https://studymoose.com/bill-of-rights-american-rights-in-relation-with-the-government-essay 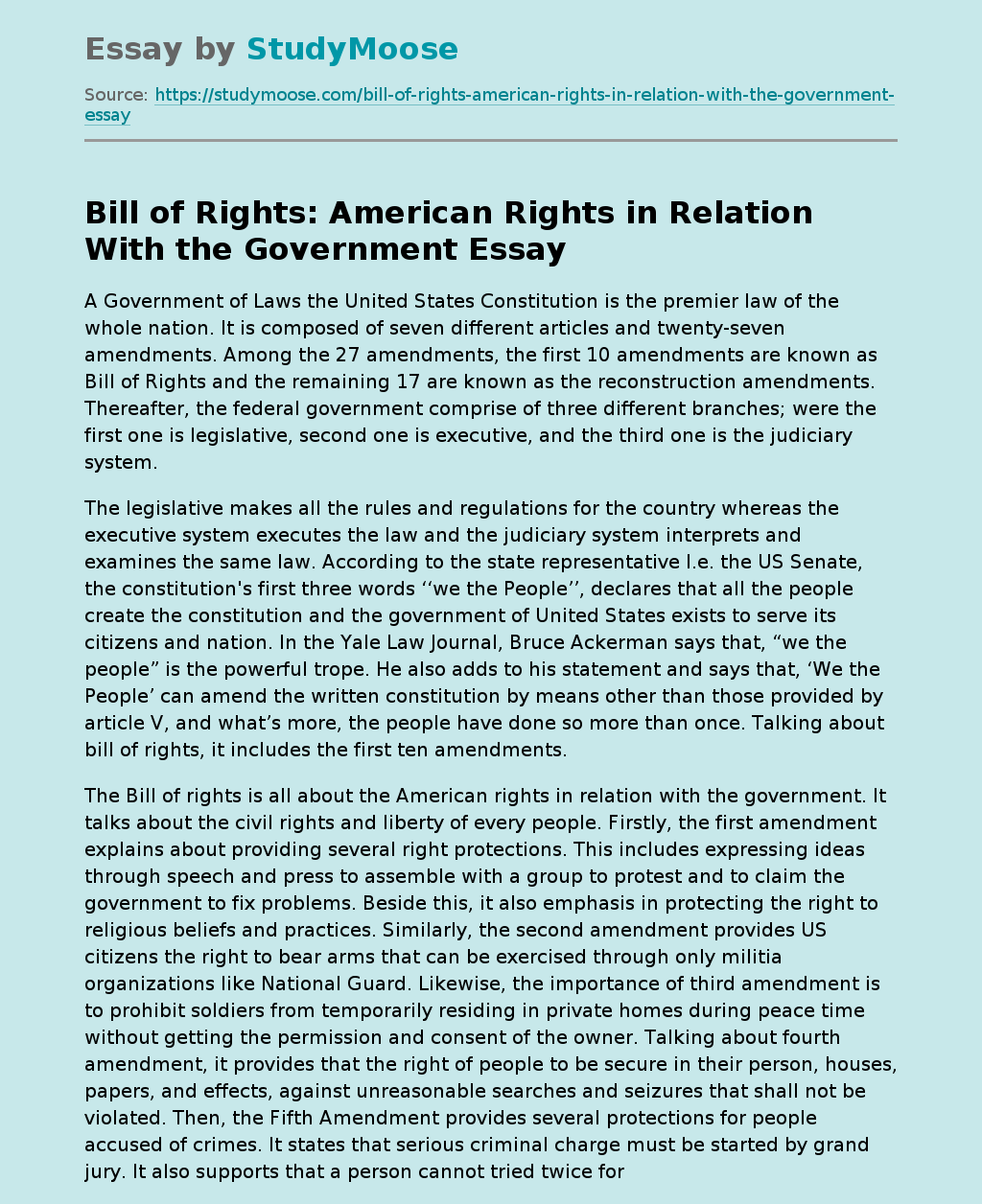