What did Bidder’s Edge do that was different from eBay’s normal customers? Why does it matter to eBay

Normally, eBay’s customers accessed their website to place and acquire information regarding the products of the said site for plainly personal reason and those is to either place items or rights for sale or purchase one. In this aspect, eBay’s dedicates its servers and electronic resources to serve up their customers for this purpose thus their informations are held publicly for personal reasons only.

However, on contrast to the said concept, Bidder’s Edge started linking their eBay’s website to their own for business purposes such as the one that is the same with the latter and that is selling items and/or rights on the internet.

In addition, this action is indeed influential for the eBay organization because of the fact that their own resources are being used by another organization for their own benefit and not for eBay interest. Another thing is that the Bidder’s Edge linking with the servers of eBay’s will drastically consumed their internet spaces thus compromising their own services for their customers.

Because of these reasons and concepts, the actions of Bidder’s Edge become ethically and legally unacceptable for the eBay company.

Look in your text. What is the definition of traditional trespass to personal property

Trespassing to someone’s personal property would legally mean unauthorized intrusion of a certain individual over some properties that are held private by another and that usage of said items would require personal notification or authorization. Unable to satisfy the said conditions will legally result to the said offense, which is traditional characterized by the law as a criminal act with its own severe legal punishment. Although the grounds and jurisdiction for the said offense varies with the local laws, its main nature is still based and characterize by the previously stated condition.

The previously stated definition of trespassing into one’s personal property is indeed similar to the definition that was applied and legally executed by the California’s Court in the case of eBay Inc. vs. Bidder Edge Inc. In the said case, the court finds that the servers used by eBay in sharing their information is indeed legally private and thus must only be used by eBay themselves for their own interest.

However, Bidder’s Edge linking actions has resulted to overcrowding of the said servers and consumption of the private resource of eBay for interest other than that of the owners. Because of which, the actions of the Bidder’s Edge Inc. is legally regarded by the court as an act of intrusion to private property thus becoming a criminal act with corresponding penalty for legal violation of eBay’s rights for privacy.

Lead Story-Dateline: The Reorder (May 26, 2000). Trampling through the Websites—When is `Linking` an Illegal Trespass? 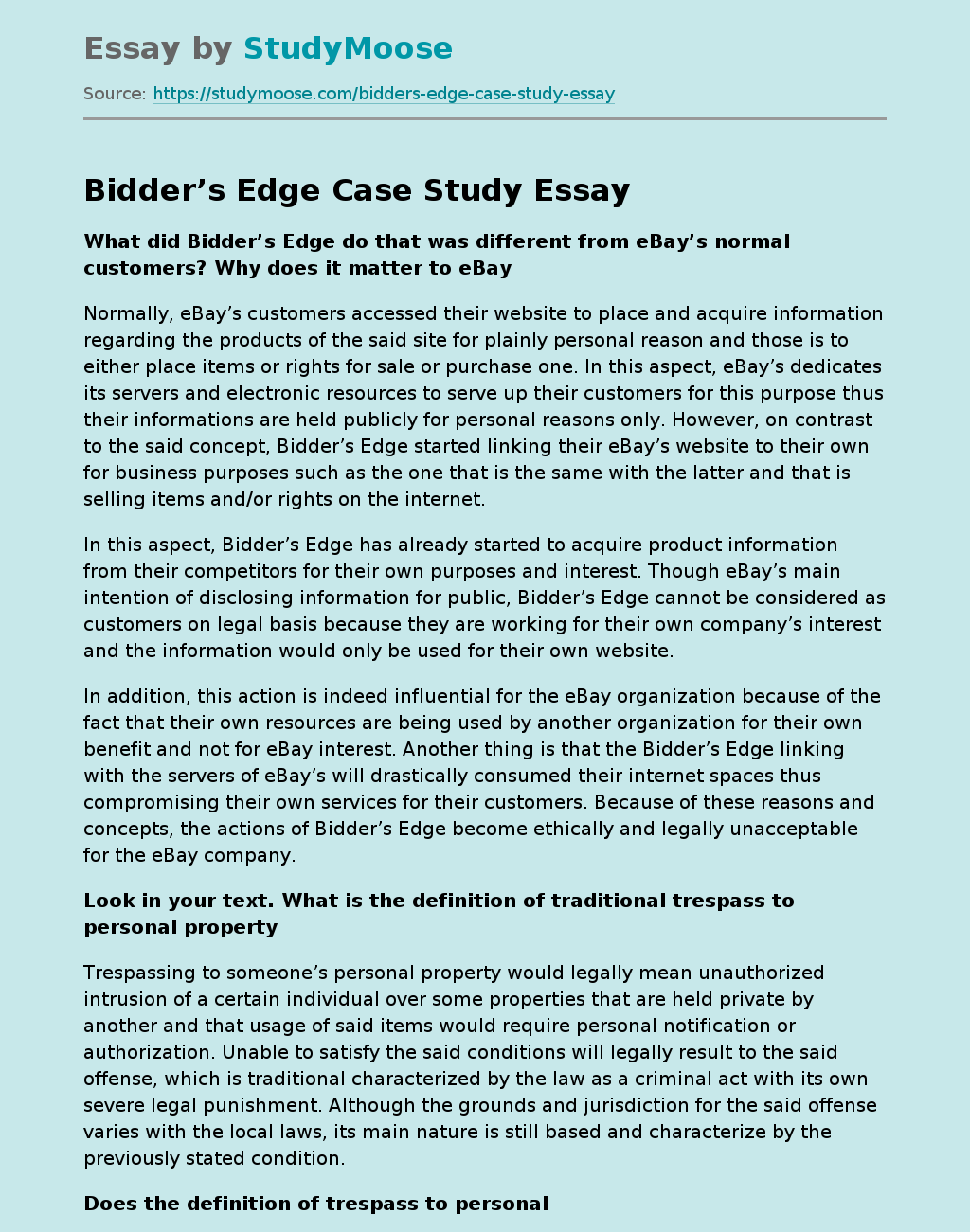