Looking back at history you will notice many artists painted pictures or sculpted masterpieces from stories in the bible. Peter Paul Rubens Samson and Delilah (1609) and Caravaggio Judith Beheading Holofernes (1599) both told a message from the story in the bible, a man’s weakness compared to a woman. The painting was made in the late 1500s and early 1600s with religious and historical context behind it. Samson and Delilah (1609) tell the story from the old testimony of Samson losing all his strength when Delilah cut his hair.

The picture symbolizes weakness in men due to women. While Judith Beheading Holofernes (1599) Judith is controlling a man with her hands, capture the significance of strength and frailty in darkness. The two paintings created the same vision but went about diminishing men in different ways.

Samson and Delilah (1609) was a painting created by Peter Paul Rubens in London during 1609-10. The painting is made with oil on wood with a 185 x 205 cm dimension. Rubens uses lighter colors compare to Caravaggio throughout the image.

The first thing you notice is Delilah with scissors and Samson lying in her laps. Then in the background, you see older women helping Delilah achieve her mission, cutting Samson hair in order to make him weak. The painting illustrates a natural and realistic, abstract because you see the weakness in Samson while Delilah is the one in control. This graphic incorporates cultural style because of realistic and true-to-life the painting shows. In this painting, Samson possession of strength came from his hair, which he cherished so much.

Delilah cutting his hair points out the historic and religious belief that woman is always seen as the weaker one and fragile to men. Therefore, I feel like the painting communicate a message because love was the cause of Samson downfall and Delilah deception made her did what she did. Some other symbolize seen is the guy cutting Samson hair has his hand cross, symbolizing deceit. Also, in the back, there is a statue of Venus, the Goddess of love and her son Cupid, representing Samson defeat due to love. Lastly, all of this is important because it helps to explore the cultural context historically, religiously and socially. Because of the religious time period, it affected Rubens belief and choice of artwork in creating the picture. Rubens was able to visit Italy and encountered Venetian painting; rich colors and textures during the 1600s.

Judith Beheading Holofernes (1599) by Caravaggio in Palazzo Barberini, Rome 1598-99. The painting has a darker and deeper meaning than Samson and Delilah (1609). Made with Oil on canvas with 145 x 195 cm, which means it’s a smaller illustration. The picture itself is very dark yet smoothing. The style of this picture is also different because you see the evil in Judith eye and someone in the background that almost resemble a witch in the background. Caravaggio approach was a shallow stage in an isolated area. The origin of the style was idealistic as well as realistic because of how Judith behaves, seducing and pleasuring Holofernes. The painting represents Judith killing Holofernes, a way of summing strength, physically and mentally. Judith holding the weapon made her believe she was the one with power due to her demeanor and hand position she used to hold Holofernes. The picture also symbolizes strength and frailty because Judith is using her strength she obtains to control and kill the men’s around her, while they beg for her mercy. Judith countenance in the painting for strength shows a mix of determination and repulsion using men. The painting also traces back historically and intellectually because the painting was done during the last 1600s where the iconography of strength and frailty was highly seen and practiced. The symbolize also tells the reader how important it is for women to receive just as much strength men can receive. Then it also tells you how females use their strength physically and mentally to satisfy themselves.

Despite both paintings was done by a different artist, they are very much similar to each other based off the way it was made and the symbol behind the painting. Both paintings have a realistic style and focus on the importance of cultural context. Both paintings have a religious and historical background that touches on strength and weakness. Even the colors used in both paintings were very similar. Red was very evident in the background with dark gold as the background color. Nevertheless, both pictures were different in some ways because in Judith Beheading Holofernes (1599), the guy was dying while in Samson and Delilah (1609), his strength was being taken away. Also, in Samson and Delilah (1609) the artist uses oil on wood while Caravaggio used oil on canvas which gave it a smoother texture. Another difference is the way the men’s strength being taken away was illustrated. Samson strength was taken away by his lover with scissors while Judith killed Holofernes with a long sword across his neck. The last difference I noticed was the painting size and how the different shade of darkness both painting was. Both were dark, but in Judith Beheading Holofernes (1599), the setting was tight and dark with black coloring bordering the characters seen. And in Samson and Delilah (1609) the picture frame is bigger with more people in the background. Rubens also uses dark painting in a small area around the picture instead of the whole background.

Overall Samson and Delilah (1609) and Judith Beheading Holofernes (1599) were able to express the importance of strength and weakness in society. Both artists did that by drawing story from the bible how they lost their strength due to a woman. They were able to do this by displaying a woman taking action to show how weak a man can be. Both paintings tell an important message that changed views in society. 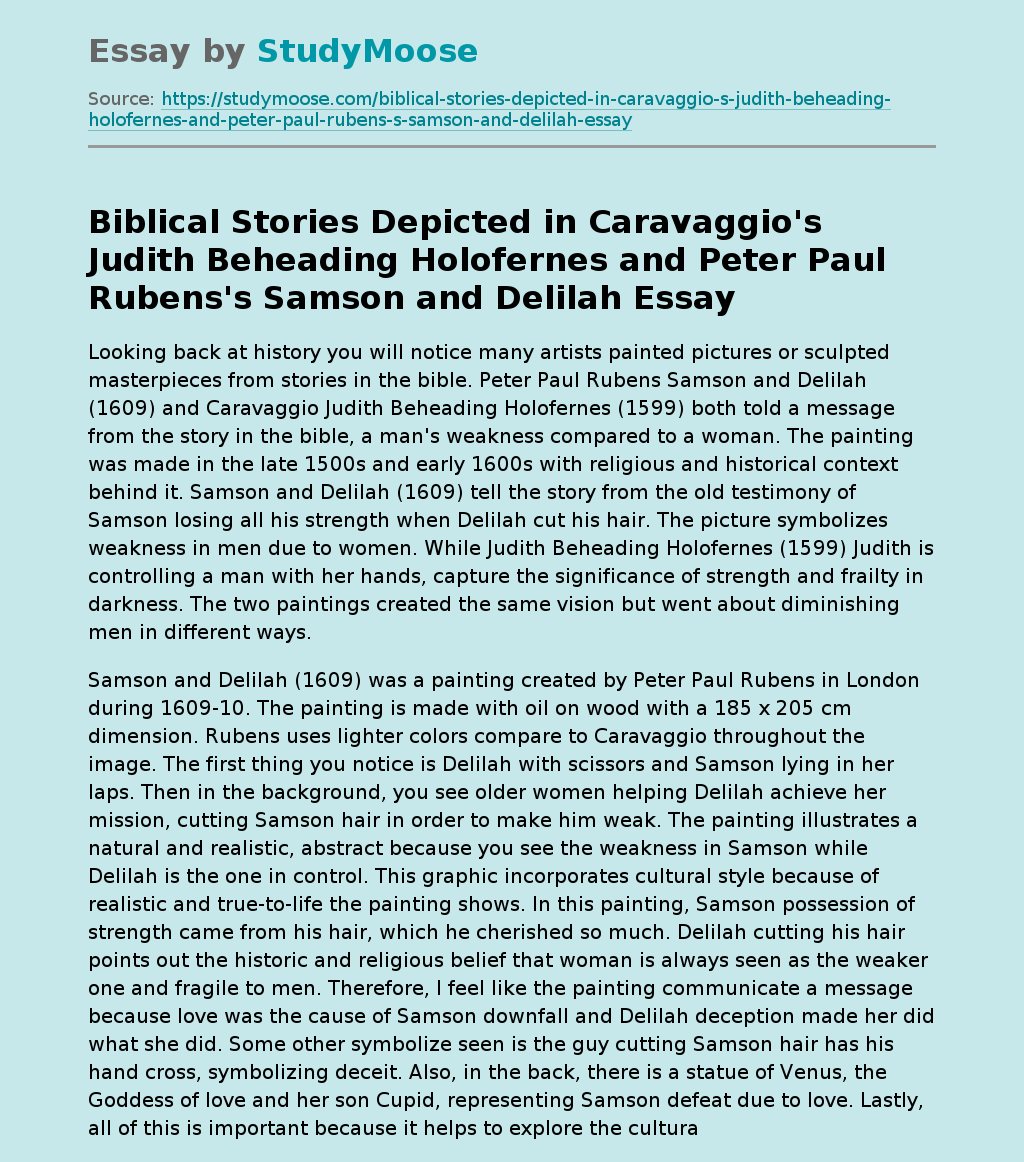