The 15th of August is celebrated as India’s Independence day. Since they were five years old, on every Independence Day, Shivani, Riya, and Nirja used to go on a girly picnic. Shivani and Nirja were very close to each other, but nobody knew what was going to happen that day. On 15 August, 2011 Shivani diligently completed her household chores, packed her picnic bag, and went off to collect her friends by the way of her bicycle.

“It is going to be an awesome day,” Shivani babbled while riding her pink bicycle down the hill.

Don't use plagiarized sources. Get your custom essay on
“ Best Friends Forever ”
Get custom paper
NEW! smart matching with writer

Shivani was very excited for the picnic, and so were the other two friends.

Nirja and Shivani were born on the same day, 30 January 1999. Shivani’s and nirja’s fathers were best friends from their days at high school. Their story is much likely an old fashioned film about two lifelong friends. They started their business together, and both got married in the same year. Excitingly they had their firstborns in the same year as well.

Nirja did not have any siblings, and Shivani became sort of twin sister to her. They saw each other daily, involving themselves in the same hobbies like playing badminton, dancing, singing, and a lot more. Besides these similarities, Nirja had a big heart and would go out of her way to help Shivani and Riya in situations that called for aid.

Most years the three friends held the their Independence Day picnic by a small lake near their school. The school used to arrange a flag hoisting ceremony on that day, and directly after the ceremony the three friends used to go for their girly picnic.

The picnic area was not far, just five miles away from Riya’s house. Shivani and Nirja lived on the same street, and they went to school together and picked Riya up. All three of them used to race and decide who used to reach the picnic spot first.

“Today you both are going to give me treat,” said Shivani after reaching the place first that day.

By the lake, they used to play badminton on the bumpy grass field and watch the fish swim. After having a late lunch of bean burritos and nachos with cheese, they sat down and used to gossip and laugh at each other. Riya had a family gathering at her home, so she left the picnic early and suddenly out of the blue, Nirja glared at Shivani

“Promise me we will be best friends exactly like our dads are,” she pleaded. Shivani had never seen Nirja that serious before. “I promise,” Shivani mumbled, barely audible.

With the time passing by, the girls headed home so that their parents would not get worried. Mr.Joshi’s residence was the nearest to that lake.

They continued down the shadowy street. Next was Nirja to leave.

“Remember your promise!” she shouted as they turned to her family compound.

Out of nowhere a black suv car came around the corner and headed straight to them.

“NIRJA!” Shivani cried out as she deflected to avoid the oncoming car.

There was skidding of tires and dinging sound. Shivani was numb. People were screaming and running towards where the car stopped. Shivani could hear people saying that the man was drunk and lost his senses. Shivani saw Nirja’s mother carrying her. The reality hit Shivani like a thunderbolt and fell down with a thud. When Shivani regained consciousness again, she was in her bed with her mother sitting beside her and crying.

“Of course he does. He takes the righteous when they are still young, before the world can hurt them and make them angel, “her mother explained.

Shivani feels Nirja next to her by her side every single second of her life, following whichever path she chooses.

“She was the most faithful of friends. She is an angel now.” Shivani sobbed. 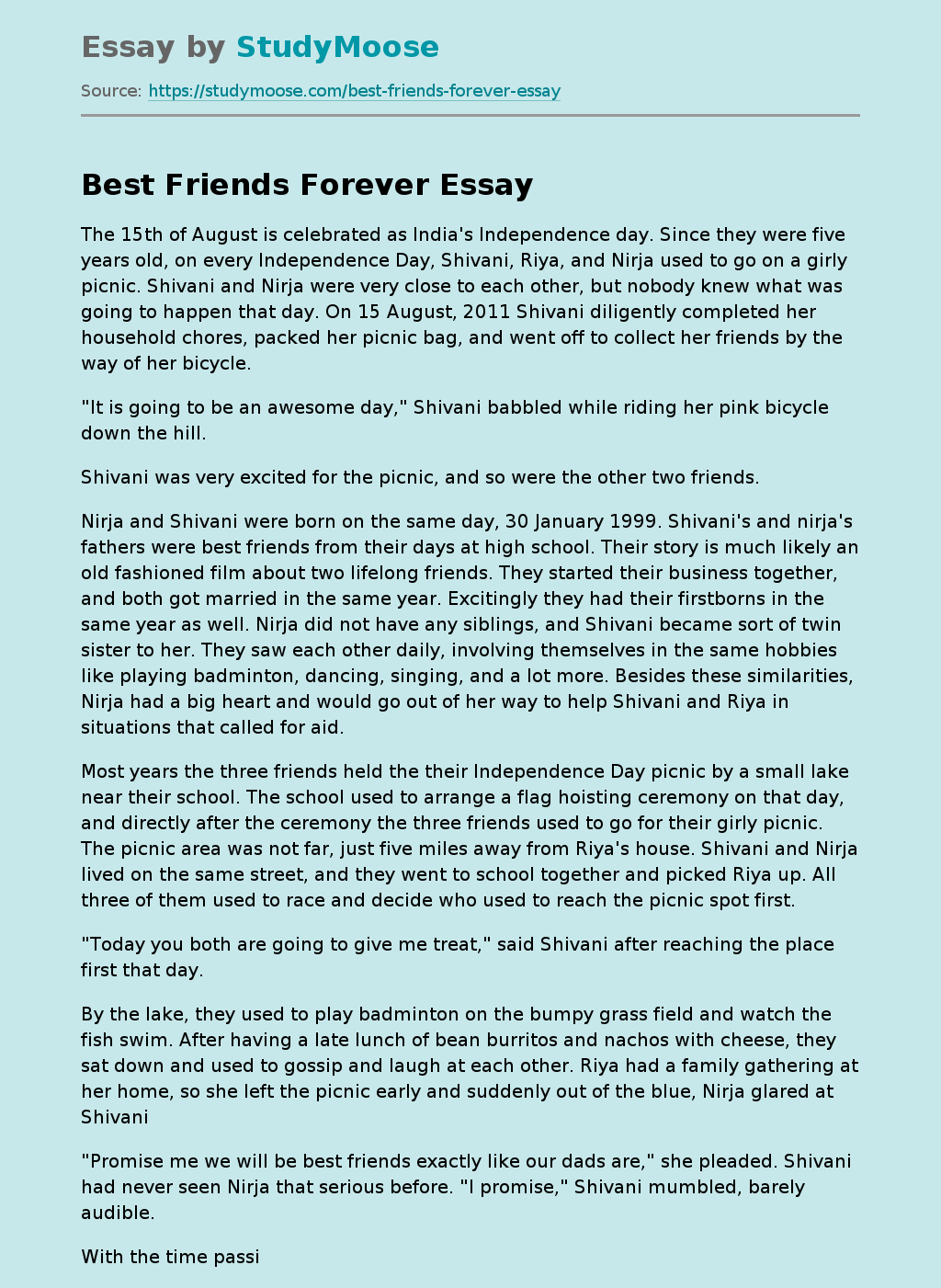