Berlin Wall versus “The Wall”

In this novel, the narrator mentions about the Wall that is built across the church which force some people in Gilead getting separate from the others. Margaret Atwood uses the reference of the Berlin wall to describe the wall in this novel. The Berlin wall was built by the Democratic republic to separate Germany into East Berlin and West Berlin. Proves of that will be the similarities of both wall including the barriers that placed around these walls and the consequences of the rebellions who against the public policies and usage of these walls.

Don't use plagiarized sources. Get your custom essay on
“ Berlin Wall versus “The Wall” ”
Get custom paper
NEW! smart matching with writer

From the novel, Offred describes the wall as “the gates have sentries and there are ugly new floodlights mounted on metal posts above it, and barbed wire along the bottom and broken glass set in concrete along the top.” (Page 40). This description matches the security status of the Berlin Wall: guard towers were placed along large concrete walls, many kinds of “anti-vehicle trenches” and other defences were built around the wall.

Also many people who tried to cross the Berlin Wall ended up dead, because those people are trying to go against the rule made by the Germany Democratic Republicans; the same thing happened in the novel, when people tries to go against the rule which made by the Gilead government, for example, the Guardians who committed the Gender Treachery (Page 53) receives death penalty and their body are hanging onto the wall which reminds everyone about the authority.

Therefore, the wall from the handmaid’s tale is referenced from the Berlin wall because both of the walls are the legacy of separation within the nation.

The name of the formal U.S.A. is Gilead, it is originally comes from the bible. Margaret Atwood uses this name because from the Bible, it describes Gilead as a country that is always in the war, this matches the situation from the novel, the handmaids’ talks about the war all the time: ““The war is going well, I hear” she says. “Praise be,” I reply.” (Page 24). Furthermore, the country Gilead from the novel was very spiritual, which connect to the bible.

Berlin Wall versus “The Wall”. (2016, Oct 14). Retrieved from https://studymoose.com/berlin-wall-versus-the-wall-essay 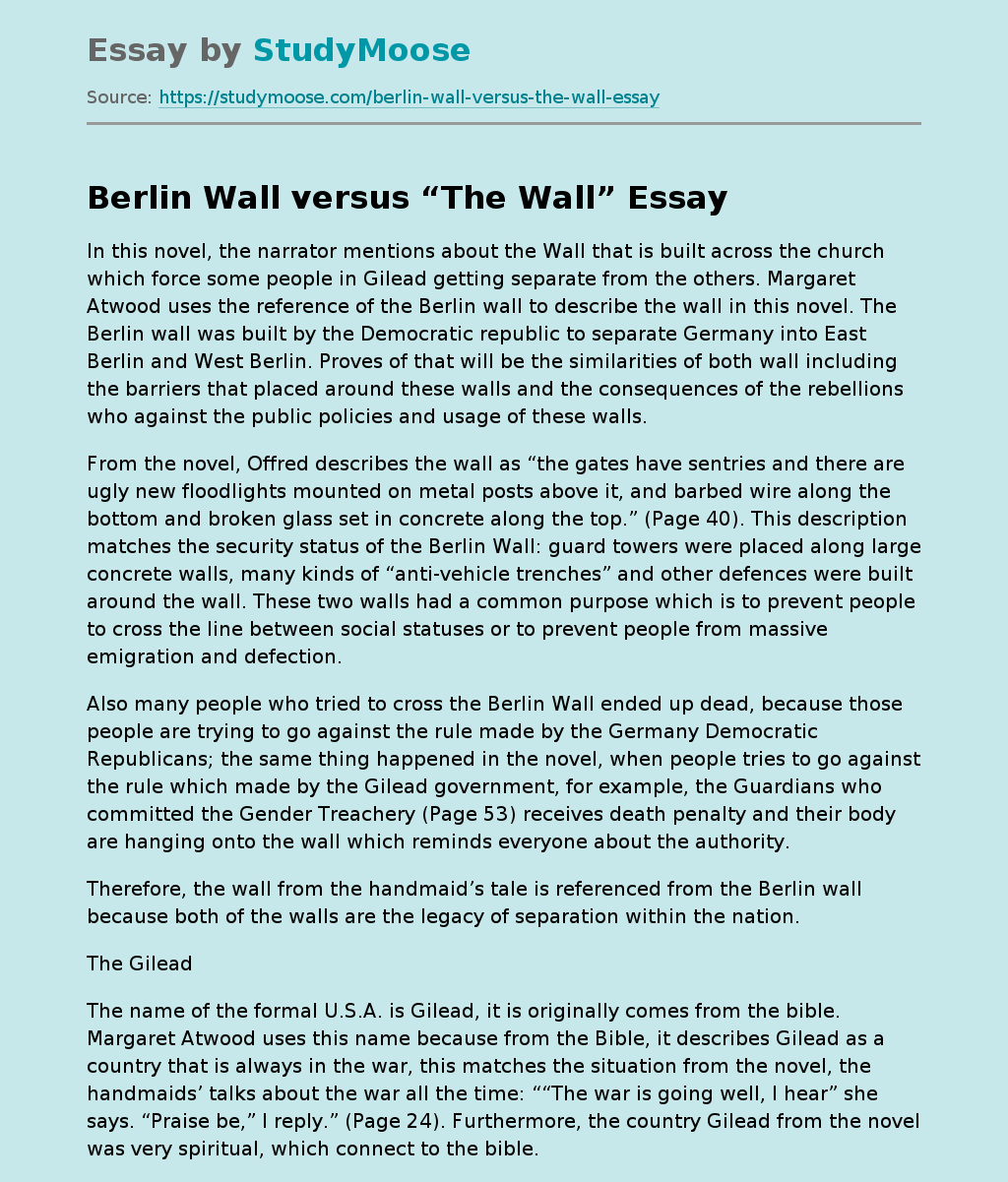