1. Realize that this prologue introduces the Danes, not Beowulf or his people the Geats. What was unusual about the way Shield came to be ruler of the Danes? What was his funeral like? What relation is Hrothgar to Shield? Unlike Hrothgar, Shield became king because he had the ability to take down the enemies. Hrothgar became king through wealth. When Shield died the Danes buried him and his treasures in the sea. Hrothgar happens to be Shield’s grandson

1. Grendel, the monster, attached thirty warriors while they were asleep and ran home with their bodies for a couple of nights. This devastated the Danes and the sorrow soon spread overseas. What magnificent work did Hrothgar undertake? Who attacked it, and with what result? How long did the attacks last? What was the response of the Danes?

They then replied they were there to save the Danes from the monster.

3. They next meet Hrothgar’s herald. Who is he? What does he tell them? What does he tell Hrothgar? What does Hrothgar respond? Are you surprised that Hrothgar knows Beowulf so well? Hrothgar’s herald interrogates the Geats about where they’ve come from and what they’re doing. He’s impressed by their mighty appearance. Hrothgar is thrilled the men are there to help which is strange because he doesn’t know them to well yet is letting them on the land.

1. What does Unferth accuse Beowulf of? How does Beowulf answer him? How is this episode relevant to the poem as a whole? What does Beowulf accuse Unferth of? Unferth accuses Beowulf of losing a swimming match and will once again have to have defeat with Grendel. Beowulf retaliates by accusing Unferth of drunkenness and describes what happen in the swimming match. This is relevant because Unferth may indeed be correct; Beowulf would have met defeat again if it wasn’t for Wiglaf.

2. What is Queen Wealhtheow doing during the feasting?
At the feast she offers drinks to all the men present. She distributes food and drink, and also strives for goodwill and peace.

1. Heroic poetry normally has a scene in which the hero arms for battle. What is different about Beowulf’s preparations for his fight with Grendel? Beowulf prepares for battle differently than any other heroic poetry scene. He doesn’t do much preparing. He is more anxious to get rid of the monster. He was prepared however to fight without a sword.

2. What happens when Grendel enters Heorot? How does Beowulf fight with him? What happens when Grendel tries to leave? Does Grendel escape? What does he leave behind? When Grendel enters Heorot, he became furious searching for the warriors until he found them and kills one Geat. While fighting the monster, Beowulf uses his bare hands. Grendel does escape, however; he somehow managed to leave behind his arm. [Celebration at Heorot] (Lines 836-1250, pp. 49-60)

1.When the Danes and Geats return from following Grendel’s tracks to the mere, someone sings in Beowulf’s presence, comparing him to Sigemund and saying that he was not like Heremod (lines 883-914). How is Beowulf like Sigemund? How is he not like Heremod? (Be alert for inserted stories such as this one. Beowulf contains many of them, most much more complex that this one.) 2. How does Hrothgar respond to Beowulf’s deed? What does he offer to do for him? What does Unferth have to say now?

3. The singer sings of Finn during the feasting (lines 1070-1158). The exact details of the Finn story are not clear, but in general, what happens? What does it suggest about the wisdom of using a woman as bride to heal enmity between tribes? 4. When the feasting resumes, what does Wealhtheow ask Hrothgar not to do? 5. Wealhtheow gives Beowulf a large, broad necklace. What later happens to it? What does Wealhtheow ask Beowulf to do? 6. Why do so many men remain in the beer hall to sleep? Why is it a mistake?

The mere is was under the water. It was full of mud, water, and dark.

1. How does Beowulf tell Hrothgar to respond?

Beowulf agrees to fight again for the Danes. He feels it is an honor and the last battle made him a bit more confident to do it. 2. What happens at the mere before Beowulf enters it? Before Beowulf enters the mere, he sinks for hours going down in the water. 3. How does Beowulf prepare for the battle? What sword does he take with him? Beowulf prepared for battle by telling Hrothgar what his wishes are if he may die. Beowulf took his ring-marked blade. 4. What happens when Beowulf enters the mere? What is surprising about where Grendel and his mother live in the mere? When he finally lands, Grendel’s mother grabs him, but his armor protects him. To me its not surprising that the monsters live in a dark place, however; it is surprising that it takes half a day to get down there. 5. What happens to the sword Beowulf borrowed from Unferth?

7. How does Beowulf kill Grendel’s mother? What weapon does he use? What happens when she dies? What does Beowulf take with him from her home? What happens to the sword he used to kill her? Beowulf drew a sword he seen hanging on her wall to cut right through her neck and break all her bones. After her death the light shone very bright. Beowulf beheaded Grendel and took it with him and half of what was left of the sword. (The other half was in Grendel’s mother) 8. What happens when Beowulf returns to the surface? Did his men expect him to return? When Beowulf returns from the surface nobody is there. They all had suspected that Grendel’s mother had killed him.

1. What future does Hrothgar predict for Beowulf? 2. Who is Hygd and why is she not like Modthryth? 3. Beowulf reports to Hygelac that Hrothgar may marry his daughter Freawaru to Ingeld. Why does he plan to do that? What does Beowulf expect the result will be? (Remember the Finn story, lines 1070-1158.) How does Beowulf think the peace will be broken? Is this the type of report we expected from the hero Beowulf, or are we seeing a new side of him? 4. How does Beowulf report about his own adventures? Does he report accurately? 5. What does Beowulf do with the treasure he was given? What does Hygelac give him?

1.How much later does Part 2 take place? What kings have died in the meanwhile? What danger now exists? 2. Why is the dragon angry? Why did the man take a cup? How did the treasure come to be there in the first place? (The speech of the lone survivor, the one who put the gold in the barrow, is in a typically Old English elegiac tone. 3. What did the dragon destroy that evening?

4. Why does Beowulf think his home was burnt? Why does he order a new shield? How will he fight this battle? What will happen to him? 5. How did Hygelac die? (The description in lines 2354-2379 begins one of several versions of Geatish history and Hygelac’s death we will get.) What did Beowulf do after Hygelac’s death? What happened when he returned home? Did he accept Hygd’s offer to become king? 6. What happened to Hygelac’s son Heardred? (That’s the story in lines 2380-2390.)

How did Beowulf plan to revenge Heardred’s death (lines 2391-2396)? 7. How many men accompany Beowulf as he goes to meet the dragon? Fourteen of Beowulf’s bravest men accompany him to fight the dragon. 8. What happened to Hygelac’s oldest brother Herebeald? Who killed him? What did this do to his father King Hrethel? (This passage, lines 2425-2509, is the second account of Geatish history and of the death of Hygelac.) What happened between the Swedes and Geats after Hrethel’s death? What happened to Haethcyn? How die Beowulf revenge Hygelac’s death?

1. What does Beowulf tell his companions to do?

Beowulf tells his companions to stay on top of the barrow in safety, observing the fight rather than participating in it. 2. What happens the first time Beowulf and the dragon fight? What do his companions do? How is Wiglaf different? What does he tell the others? What does he then do? The first time Beowulf fights the dragon his “brave” companions flee the scene. With the exception of Wiglaf. He reminded the men they should have all repaid Beowulf then ran off to go help kill the dragon

3. What happens the second time Beowulf meets the dragon? What happens to Beowulf? Who kills the dragon? Beowulf’s sword fails and makes him humiliated/ afraid for his life. The dragon hits Beowulf with another blast of fire. Beowulf took the final swing but both men, Beowulf and Wiglaf, killed the dragon. 4. What does the dying Beowulf ask Wiglaf to do? What happens when Beowulf sees the gold? How does Beowulf want to be buried? Beowulf asks Wiglaf to get him the treasure so he may see it. Then Beowulf thanks God for getting rid of the dragon. He asks to be burned at the coastal headland and it be known as Beowulf’s Barrow.

1. What happens when the companions return? What does Wiglaf say to him? What does he expect will happen in the future? Wiglaf tells them that they will now lead a shameful life, t would be better if they had died. 2. What does the messenger tell the city? (This passage, lines 2900-3027, is the third account of the history of the Geats and the death of Hygelac. These are the enemies that will attack the Geats when they learn of Beowulf’s death.) What happened overnight in Ravenswood after Ongentheow killed Haethcyn? What happened the next morning? What happened to Ongentheow? What does the messenger say to do with the gold? What is the final image (animal) of the messenger’s speech? 3. What does Wiglaf tell the crowd that comes to see the dragon and Beowulf? 4. What happens to the dragon? 5. What happens during and after the funeral celebration? 6. What did the Geats say about Beowulf in the last three lines of the poem? Are these the terms one would expect to be used to describe a military hero? 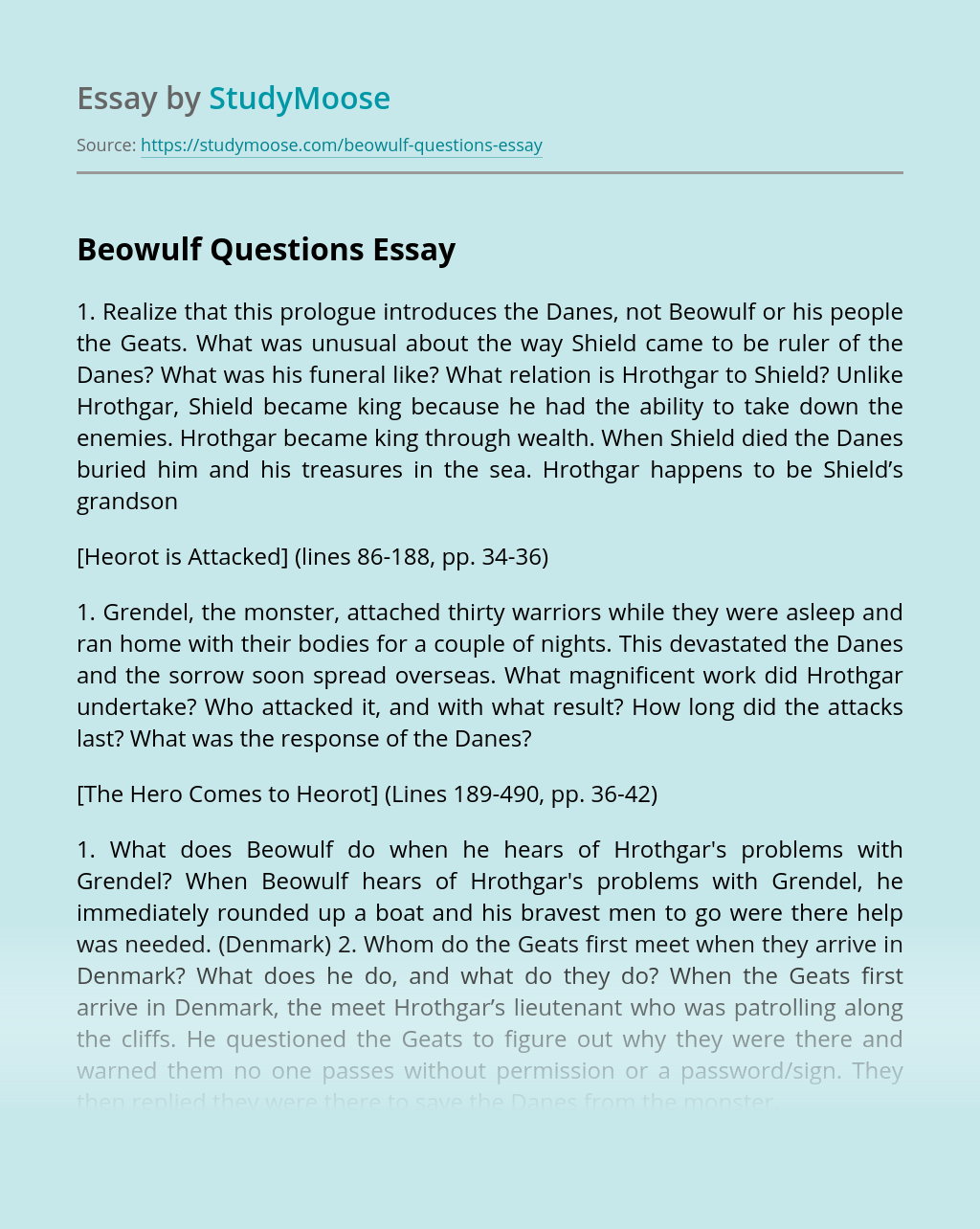