"Beowulf" and "Sir Gawain and the Green Knight"

Beowulf and Sir Gawain and the Green Knight:The Importance of Literary Genre and Time Difference”They said that of all the kings upon earth / he was the man most gracious and fair-minded, / kindest to his people and keenest to win fame,” (Beowulf 97 ln. 3180-82). This is a description of the great king Beowulf, from the epic poem of the same name. “…Sir Gawain you are, / Whom all the world worships, whereso you ride; / Your honor, your courtesy are higest acclaimed / By lords and by ladies, by all living men,” (Sir Gawain 139 ln.

Don't use plagiarized sources. Get your custom essay on
“ “Beowulf” and “Sir Gawain and the Green Knight” ”
Get custom paper
NEW! smart matching with writer

1226-29). This is a description of Sir Gawain, from the romantic poem Sir Gawain and the Green Knight. Both of these heroes are obviously very highly viewed by those around them, although almost 600 years separates the writing of the two manuscripts. Beowulf, an epic poem, and Sir Gawain and the Green Knight, a romantic poem, are two great literary works, both with nameless and possibly countless authors, separated by literary genre and 6oo years of societal development.

Beowulf is an epic, and as such follows certain characteristics that are unique to this form of poetry. The key to any epic is its hero and his flaw; the hero is required to have a flaw because the epic is a form of serious and tragic poetry that allows for few lighthearted moments. This particular epic centers around a young and eager adventurer named, of course, Beowulf, who is fueled by a desire to be remembered forever as a great hero.

His calling comes when “…a fiend out of hell, / began to work his evil in the world. / Grendel was the name of this grim demon / haunting the marshes, marauding round the heath / and the desolate fens;” (Beowulf 33 ln. 100-04). Grendel also brings in the first otherworldly element of the poem, a characteristic specific to epics; this element is expanded upon when Beowulf tells of many sea monsters he destroyed in his youth, later when Grendel’s mother seeks revenge, and finally when the great dragon threatens Beowulf’s kingdom.

The purpose for extremely long epics such as Beowulf (which is over 3000 lines, and likely longer due to destroyed sections of the original manuscript) lies in tradition and preservation. It is thought that the actual Beowulf lived around 450 A.D., but the epic was not recorded until approximately 700 A.D. – during this long gap, tales of Beowulf were passed down orally, a tradition of the Anglo-Saxons based upon the preservation of their unique culture. This culture was a serious one because the times of the Anglo-Saxons were extremely dangerous – outside of their own clan they had no one to trust as any outsider was just as likely to kill them as look at them, lest he end up slain first.

Sir Gawain and the Green Knight, in contrast to the epic, is a romance: a circular and lighter version of the epic based around a single quest. Like the hero of the epic, Gawain has a flaw that leads to his failing, but as the romance is lighter it does not lead to his death. Gawain is a pure young knight whose quest presents itself upon the appearance of the Green Knight at a holiday feast at King Arthur’s court. As in the epic, there is also an element of the fantastic present: “Great wonder grew in hall / At his hue most strange to see, / For man and gear and all / Were green as green could be,” (Sir Gawain 117 ln 147-50).

The style of Sir Gawain follows the alliterative style of Beowulf that makes it easier to perform orally, but the romance mostly serves to entertain rather than preserve tradition or culture, as is the purpose of the epic. This is likely because while 1375 (the estimated time of Sir Gawain’s recording) was certainly still a rough time for anyone survival-wise, it was a less animalistic time than 700 A.D. as society had 600 years to develop in the interim. Camelot is described as a prosperous place with a grand castle and many luxuries – in the time of Beowulf the structures that preserved the Anglo-Saxons were more or less gigantic huts. Further, while Gawain does set out on a quest with his life on the line, there are no giant serpents attacking Camelot and eating its court members out of spite.

To the Anglo-Saxons in 700 A.D., the comitatus was very important as all the thanes had was each other; the comitatus is also important in Sir Gawain and the Green Knight, but on a lesser level. This argument can be made because, although Sir Gawain sets out on a task to preserve his comitatus back at Camelot, he makes the adventure by himself; Beowulf is constantly surrounded by his band of men. Beowulf does separate from his thanes when he battles Grendel and his mother, but it is in the interest of their immediate preservation as the two monsters would happily gobble up any of them. The dire importance of the comitatus is also seen in Beowulf through the theme of revenge, which is not present in Sir Gawain. In 700 A.D., it was every tribe for itself and there was no set form of law or legal system: if a man was murdered, the only reparations that could be made against his killer were those belonging to wergild.

In the time that Sir Gawain takes place, there were entire kingdoms under the rule of the leader versus small tribes, and there was a better-established legal system for dealing with crimes such as murder. This legal system is also evident through the many contracts found in Sir Gawain, such as those between Gawain and the host during his stay: “‘And Gawain,’ said the good host, ‘agree now to this: / Whatever I win in the woods I will give you at eve, / And all you have earned you must offer to me,” (Sir Gawain 137 ln 1105-07). This particular contract also draws away from the importance of the comitatus because it involves the interest of only two men – if Beowulf received such an offer, it is likely he would split whatever he acquired amongst himself and his thanes.

Religion is an important difference between the two novels and the times they were set in. In the time of Beowulf Paganism was still commonly present. In the time of Sir Gawain Christianity was the widely accepted religion. Religion in general is much more present in Sir Gawain, as the entire plot of the book revolves around Christian holidays and celebrations. Christianity affects even the attire of characters in the story. Sir Gawain’s shield shows that “he fittingly had / On the inner part of his shield [Mary’s] image portrayed, / That when his look on it lighted, he never lost heart,” (Sir Gawain 128 ln 648-50). The downfall Gawain suffers also has to do with his religion, as he puts faith in a magic baldric instead of in God, and in doing so is belittled and shamed by the Green Knight. In Beowulf, there is mention of God, but merely in passing – it is obvious that religion is not as important to the Anglo-Saxons of 700 A.D. as is the comitatus. This goes back to the harshness of the time and the fact that all the faith the thanes had, they put in one another.

The main factors that divide Beowulf and Sir Gawain and the Green Knight are literary genre and time difference. Throughout the 600 years that separated the creation of the two manuscripts, society developed, the legal system developed, the emphasis on the comitatus changed, and the popular religion turned from Paganism to Christianity. While all of these factors altered the style of writing and the content of the two poems, the fact remains that Beowulf and Sir Gawain are two great literary heroes who strove to be all that they could.

"Beowulf" and "Sir Gawain and the Green Knight". (2016, Jul 18). Retrieved from http://studymoose.com/beowulf-and-sir-gawain-and-the-green-knight-essay 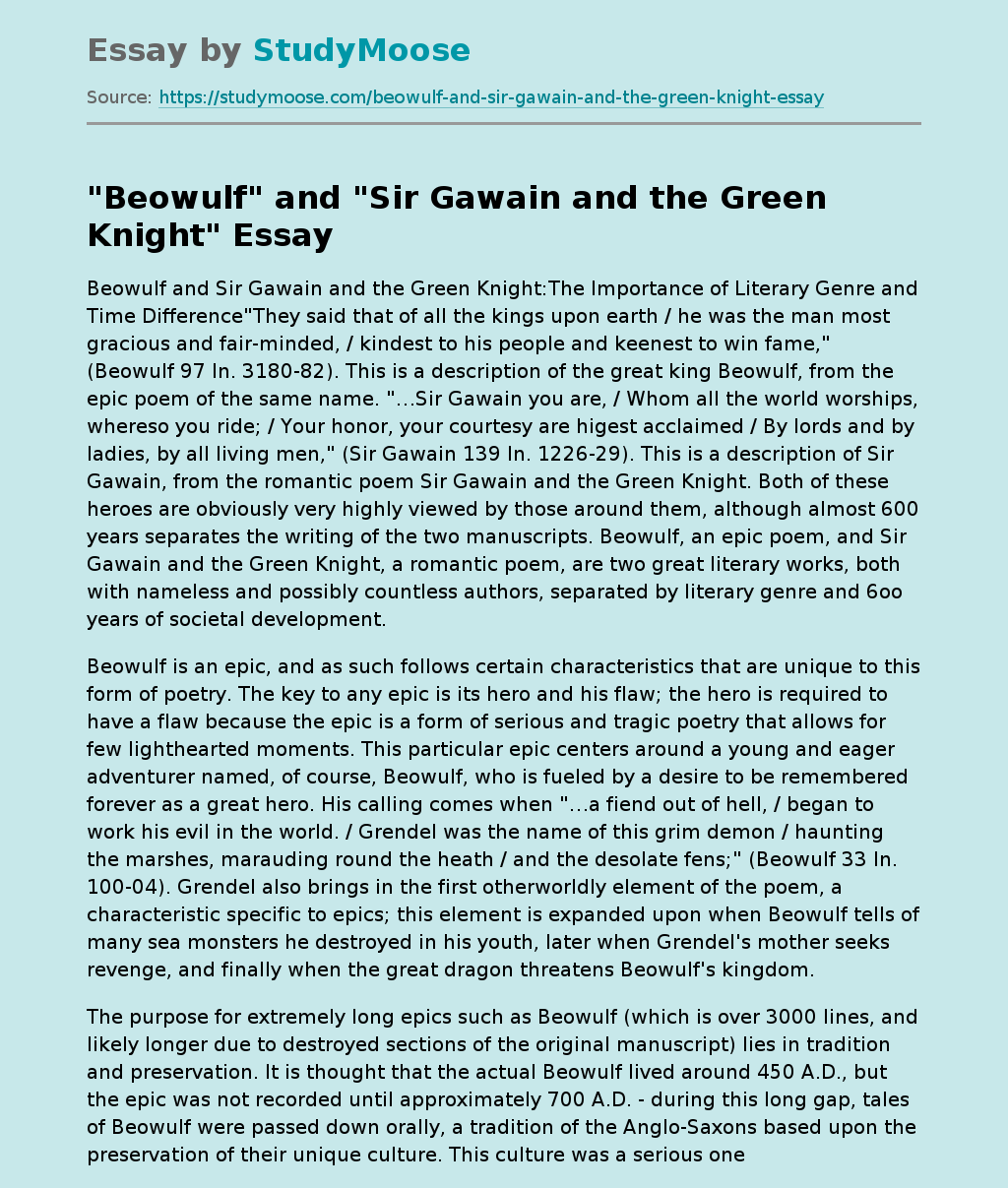