1. Objective:
The objective of this experiment is to demonstrate the bending of a bean when loaded at the center of its length and examine its deflection when positioned in two different ways, when the flat side of the beam is support and when the thin side is supported.

In addition, try to find linear relationship between the load applied and the deflection of the beam and comparing the experimental deflection with the theoretical deflection. If the load is applied at the mid- length a=b=L/2 then mid span deflection is: ? = PL3/(48EI).

Don't use plagiarized sources.
Get Your Custom Essay on Bending of Beam Lab Report Just from $13,9/Page

Where P is the applied force, L is the length of beam, E is the modulus of elasticity of aluminum, and I is the moment of Inertia. For a beam of rectangular cross section, say of width w and thickness t, the same mid spam deflection of the centrally loaded beam when the flat side is supported, then be compared to that when the thin side is supported. The moment of inertia for the respective situations are given by: I1 = wt3/12 and I2 = w3t/12

It could be readily verified that the later situation offers less deflection under the same load.

3. Experimental Procedures and Setup:
Case I: The dimensions of the beam was measured and the cross sectional area and the moment of inertia were calculated. Next, the beam was placed on the
stand such that the widest side of the cross section is on the supporters, and the scale was reset. The clearance between the middle of the beam and another beam placed on the top of the stand was measured. The beam was loaded the mid-length in 2.745 lbs. increments up to 6.745 lbs. The change in clearance of every load step was measured and data was recorded.

Case II: The beam was turned around in such way that the shortest side of the cross section is on the support. The steps described in Case I was repeated and data was recorded.

Discussion: It was an interesting experiment. We can see from the data that when load are added along the length of the wood it tended to bend more than when adding weight to it width. We also observed the relationship between load and deformation. If we increase the loads, deformation will also decrease. From this experiment we learned that when when a beam will be placed with the wide side on supports it will show les deflection and is more efficient to use.

5. Source of Error: There are some errors between the theoretical and the experimental deflection. This error might have happened because of the inaccuracy in measuring the length between the beam and the ground, which happens because of not measuring the length perpendicular to the beam itself. Therefore, the reading of the height might be different from time to other, so, the calculation of deflection is different from the theoretical.

6. Conclusion: As mentioned before, with this experiment we concluded that the deflection of a beam is different depending on its position. We also concluded that when the beam is positioned with its thin side on the supports it is able to carry more load than when it is positioned with its flat side on the supports. This is due to the fact the beam’s inertia change as the position changes. When the beam is placed on its flat side its inertia is less than when positioned on its thin side where the inertia is bigger. This means that because the flat side has less inertia there will be less resistance in changing its position, so it will deflect more. Because the thin side has more inertia, it will have more resistance in changing its state. 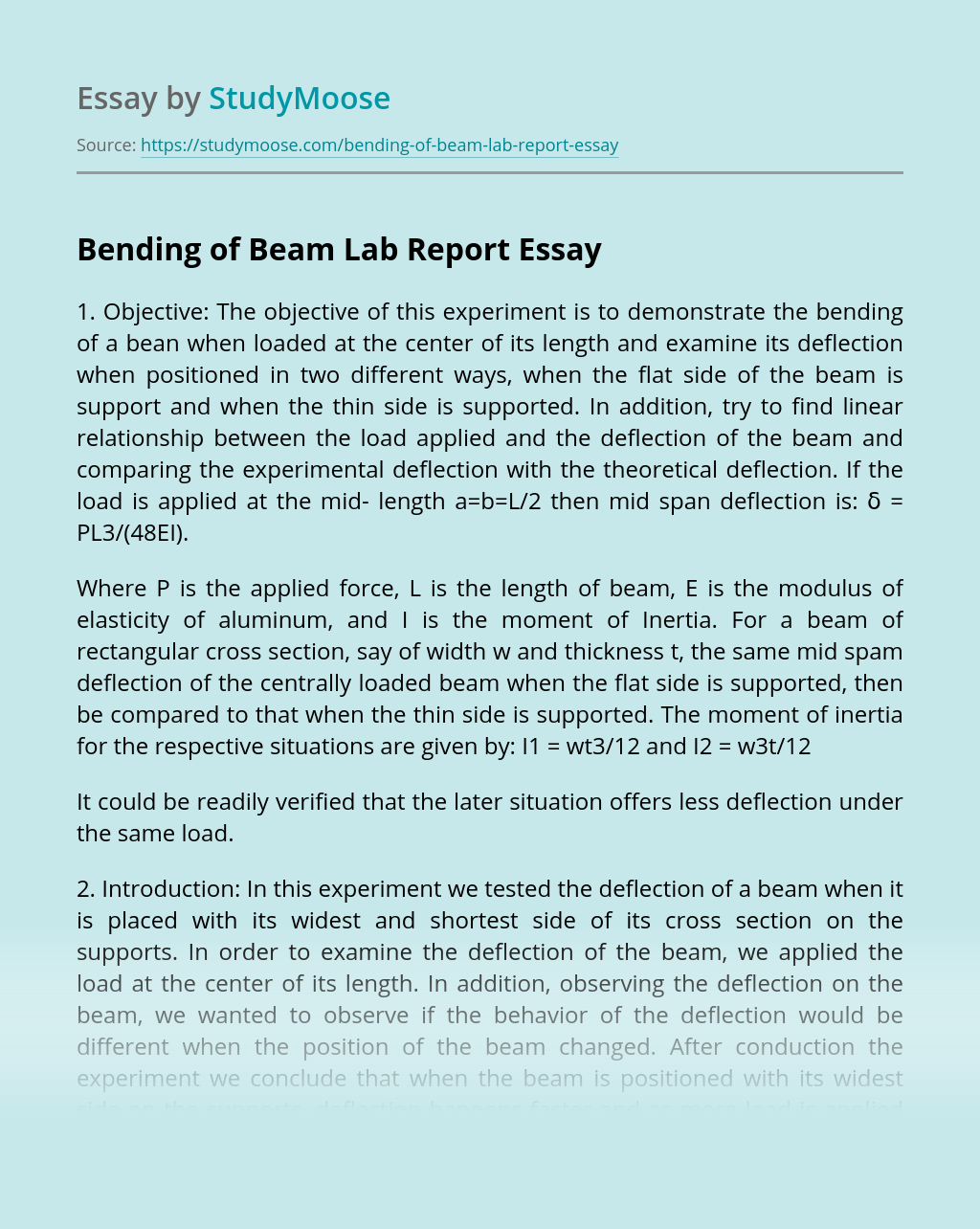 In my personal literacy narrative, I have chosen to include the most important literacy sponsors that have had influenced my growth as a reader over the years. I would like to dwell on the positive impact of my parents, books and educational institutions on my personal literacy. It goes without saying that each of the...

“Mirror, Mirror, on the wall, who’s the fairest of them all?” “You are.” (Snow White) Ah, yes, the Evil Queen. She was wicked, terrible, and horrid – or was she? Maybe she was just a normal, average person seeking acceptance. Maybe she felt the need to be the best, to achieve perfection. Or, maybe she...

If Macbeth were to look in the mirror, at the time he spoke these words he would see the reflection of an unrecognisable man, compared to that which would have looked back at him at the beginning of his story. The man who looks back at him now, complaining that life signifies nothing, is soul-less,...