Don't use plagiarized sources.
Get Your Custom Essay on Ben Jonson Song to Celia Just from $13,9/Page

The rhyme scheme is ABCB, ABCB until a change in line nine to DEFE with one slant rhyme pair. The change in rhyme scheme from ABCB to DEFE represents a change in the tone of the poem while staying true to its sing-song nature. From lines one through eight, Jonson uses drinking and thirst as metaphors for love and desire. In the opening line when he says “drink to me, only with thine eyes,” Jonson is personifying Celia’s eyes and metaphorically suggesting that they are able to declare love.

The recurring reference to wine and drinking implies that love is intoxicating and in line two, it is implied that a “pledge” similar to a toast can be made of love similarly to a promise. In line five, the speaker mentions the “thirst… from the soul” in reference to the speaker’s desire to live happily in love with Celia. The speaker even says that he will give up immortality presented to him in liquid form just to be with her. Line nine presents a change in the poem. The speaker’s love from line nine to the end of the poem is compared to a wreath.

Late can either mean at night or occurring after the proper time. Depending on the reader’s interpretation of this line, the poem can have completely different meanings. If the wreath is considered to be sent at night, Celia has simply rejected its sender. If the wreath is considered to be sent after the proper time however, it is implied that Celia and the speaker have had previous relations with each other and that the speaker has sent the wreath in hopes of another chance at romance and happiness.

By describing the wreath as “withered” in line twelve, it is implied that something that once existed has now died. The difference between the hopeful, longing, intoxicated feeling of the first half of the poem with the defeat in the second half is what makes this poem profound in its telling of rejection. The use of metaphors and debatable language appeal to the readers’ emotions and provoke their thoughts add to the confusion and passion of one-sided love, thus making Ben Jonson’s “Song: To Celia” an effective work in its portrayal. 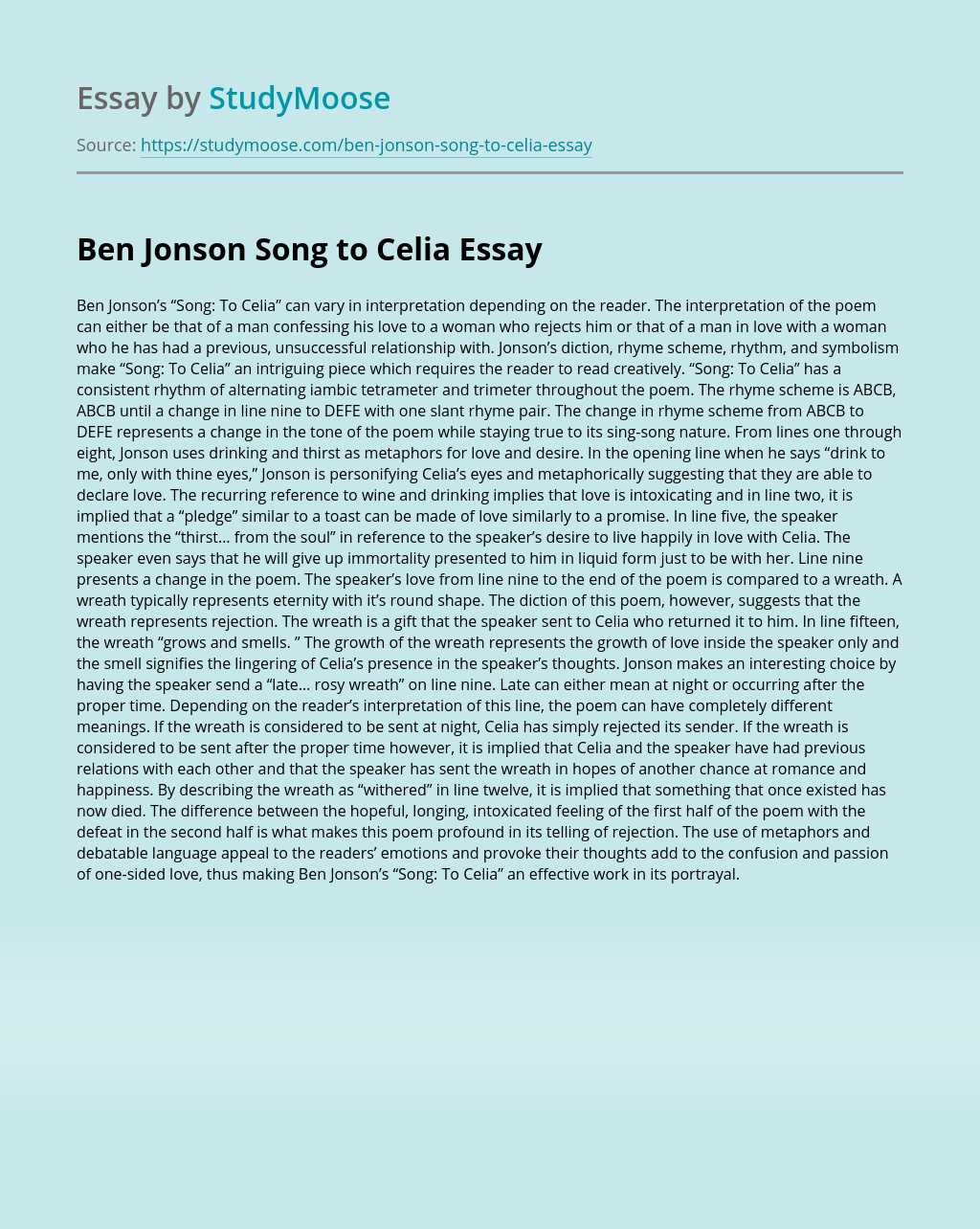 Muscular Endurance: One definitely needs to have a high level of muscular endurance because of the constant running and down the court and the changing of directions putting a lot of strain onto your muscles, especially muscles located in your upper leg i. e. the Quadriceps Group and Hamstrings. Because of this I will be... VIEW ESSAY

ACKNOWLEDGEMENT This research study would not be possible without the help of these people in making this research a success. The researchers family and parents who supported them emotionally and financially throughout since day one until the research is completed. For showing their unfailing support, for understanding the researchers and for believing in their skills... VIEW ESSAY

Carry Citizens of Illinois, is it so wrong to carry a concealed weapon for personal protection? There are multiple citizens of the United States believe that it is their constitutional right to carry. Statistics show that the crime rates have dropped in states with concealed carry and the death rates have not really grown. There... VIEW ESSAY

View sample
Problem Solving is predominately one of the biggest areas

Problem Solving is predominately one of the biggest areas individuals need to work on in order to successfully work with others. Problem-based learning (PBL) has been shown to significantly improve the development of problem-solving attitudes (PSA). Blended learning has a lot to do with improving sets of problem solving skills because it is a mix... VIEW ESSAY