From the end of the 1700s and through the early 1800s, America was beginning to see a change in civilization. People were moving from Puritan thoughts and ways towards a new way of a less superstitious, more scientific and intellectual interchange. This movement called the Age of Enlightenment influenced the styles and writings of those like Benjamin Franklin and Thomas Paine.

The Age of Enlightenment was a period of questioning and appliance of reasoning to explore many subjects, such as civil rights, often left untouched.

Don't use plagiarized sources. Get your custom essay on
“ Ben Franklin and Thomas Paine ”
Get custom paper
NEW! smart matching with writer

People were leaving behind their Puritan pasts and advocating the use of scientific method instead of superstitious beliefs of religion. The Enlightenment takes its name from those who wanted to contribute to a brighter future and society.

According to Henry Clark, “Paine’s importance rests on the fact that he was an idealist, a man who envisaged a happier way of life for all men in the future, who thought in the light of first principles such as the equality and sacredness of all souls before God, and who, since he believed that in the past the life of the common people had been miserable, demanded a sharp break with the past, with tradition” (Clark).

He wrote “Common Sense” even though he was acting in treason because he held firm to his beliefs that America should be independent..

He uses many techniques while writing, one being the overall patriotic and simple tone. Staying away from Latin phrases or philosophical arguments, Paine wrote “Common Sense” in simple terms, referring to the Bible and making the overall tone similar to that of a sermon.

For example, he writes, “In the following pages I offer nothing more than simple facts, plain arguments and common sense” (Paine 335). He wanted to make sure that all Americans could understand the idea of independence, and that independence from England could be achieved. Paine also uses a number of aphorisms to introduce his argument.

By doing so in “The American Crisis”, he captures the readers, allowing them to understand these small, witty statements on a personal level. For example, Paine writes, “The harder the conflict, the more glorious the triumph” (Paine 345). By using aphorisms, he was able to hint the audience of what is to come throughout his writings. In another example he writes, “These are the times that try men’s souls” (Paine 345). These aphorisms make the reader think and ask themselves questions that are later answered through the text. The Age of Enlightenment was also evident in Benjamin Franklin’s writings.

The Autobiography” establishes in literary form the first example of the fulfillment of the American Dream. He writes of the possibilities of life in America through his own rise from the lower middle class as a youth to one of the most admired men in the world as an adult. Furthermore, he states that he achieved his success through a solid work ethic. For instance he writes, “It was about this time that I conceived the bold and arduous project of arriving at moral perfection” (Franklin 307). He wants have that American dream, so he comes up with the thirteen virtues to help him.

He proved that even undistinguished people can, through industry, become great figures of importance in America in his writings. His “The Autobiography” also reflects idealism. He somewhat writes of intellectual flourishment and political thought and during part two, he is trying to live them out. According to Betsy Erkkila, “while the Revolution is not present as part of the manifest content of Franklin’s narrative, it is present as the political or narrative unconscious of Franklin’s “Life”–as a scene of social crisis, bloody contest, and challenge to traditional structures of authority in family, society, church, and state” (Erkkila).

This meaning that even though it wasn’t spoke of directly, the revolution was desired by Franklin so others could have the American dream and achieve as he did. In conclusion, the Age of Reason, or The Enlightenment was a good period for the New World. Through the literary works of those such as Paine and Franklin, they helped create and mold the definition of America and the American dream. Franklin and Paine used numerous styles of writing such as aphorisms, themes like the American dream to help America succeed. 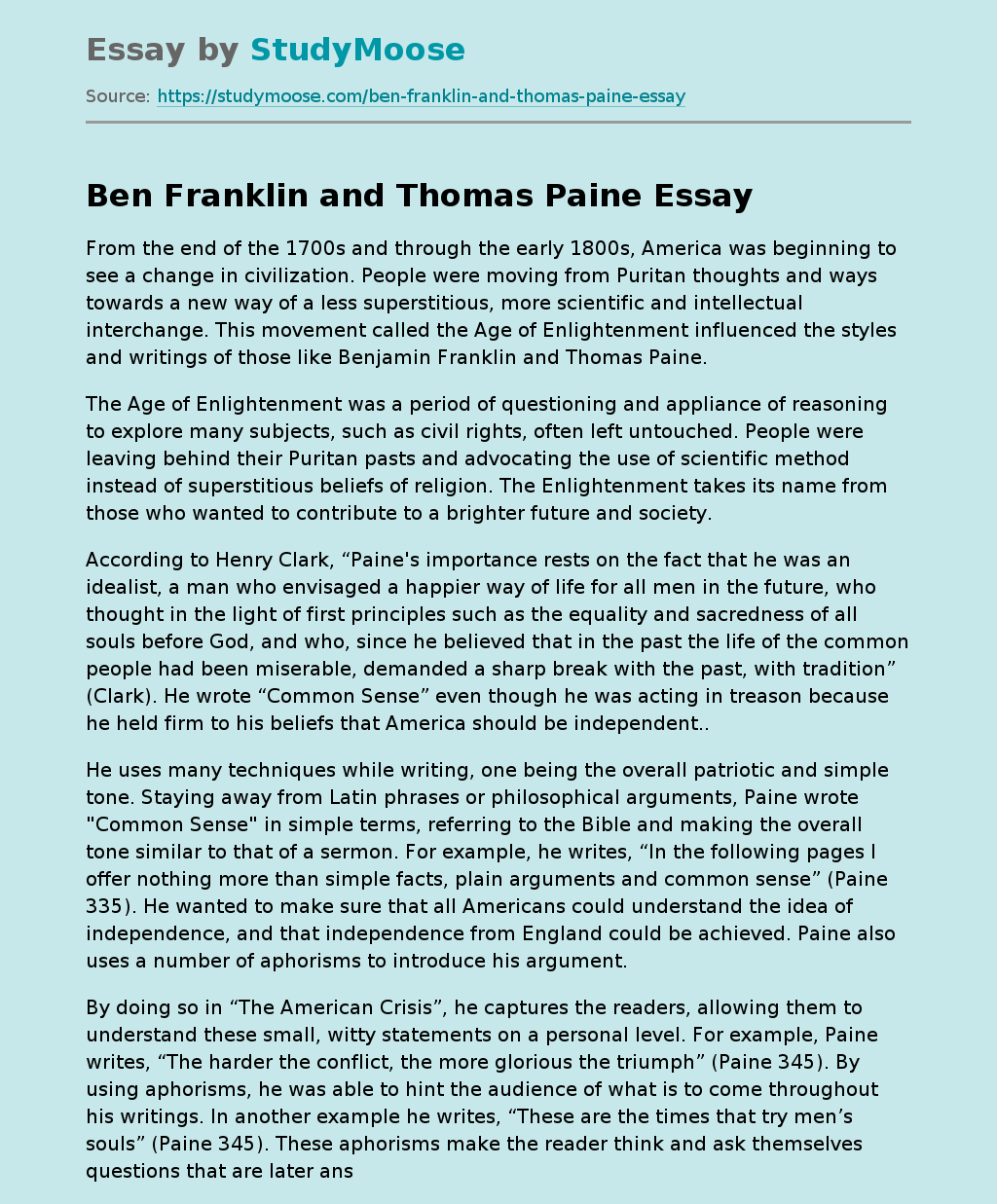