Ben and Jerry’s corporate culture is one that focuses on the environment, its products, and people. The corporate culture of “Doing Good by Doing Good” and “Peace, Love and Ice cream” establish the guideposts for how employees behave in the business. Ben and Jerry’s hold a deep respect for people both inside and outside the company. Ben believes that “Businesses have a responsibility to give back to the community,” while Jerry believes that “If it’s not fun, why do it? ” Both Ben and Jerry have had a profound effect on establishing the values of the company.

Don't use plagiarized sources.
Get Your Custom Essay on Ben and Jerry Corporate Culture Just from $13,9/Page

Ben and Jerry’s philosophy of having fun has permeated the corporate culture and the ice cream flavors that are being sold in the marketplace today. Flavors such as Karmel Sutra, Imagine Whirled Peace, and Magic Brownie are popular flavors today while Cherry Garcia named after Jerry Garcia of the Grateful Dead was one of the first fun flavors. Ben and Jerry’s encountered recent controversy when it named a new flavor after a Saturday Night Live character, Schweddy Balls.

The company’s bold position on having fun and being brave has been controversial, but it has not hurt the company’s profitability.

Ben and Jerry’s strives to have a positive impact on the environment. The company has a philosophy of producing food in a way that is not wasteful or harmful to the environment. Some of the ways Ben and Jerry’s is trying to help the economy and use safe food methods is by using family farms in rural communities to produce their ice cream products. While this helps keeps the environment clean and cut down on waste, it also helps family farms prosper. The company realizes that the economic wealth of the country is wide and they want to produce ice cream in a way that provides prosperity to farmer while ensuring corporate profitability. 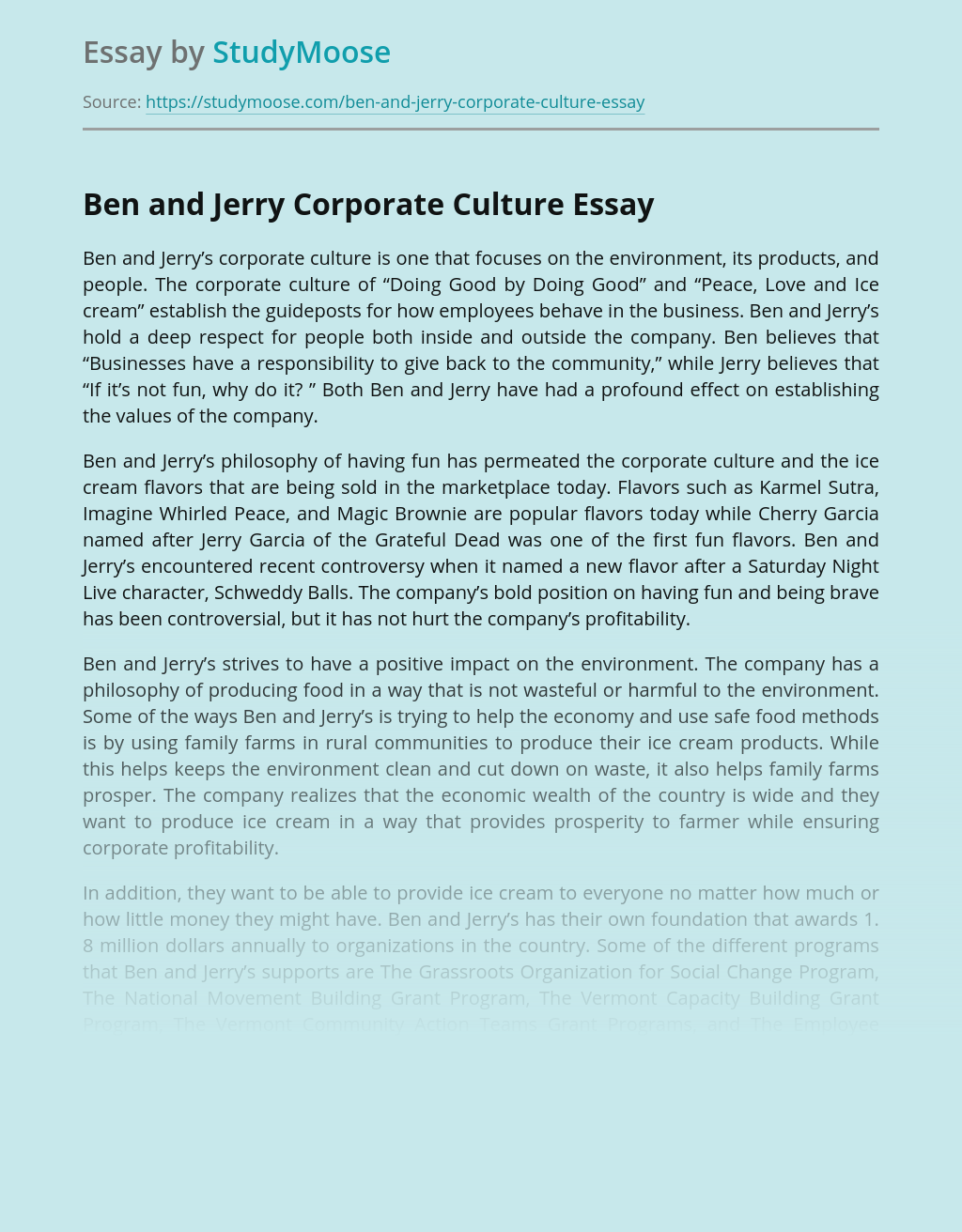 Difference between internationalization and globalization

When Confucius met Socrates It is world-renowned that Confucius and Socrates are the top-ranking philosophers. They are both authorities in their own field of their countries. Nevertheless, there have been some arguments about the conflicts between the Chinese culture and Western thoughts. Speaking of the differences between the Chinese and the west, there must be...

The culture that I have chosen to write about for this paper is the culture of India. It can be both a demographic culture and a spiritual culture, depending on the particular beliefs of the client. The people of India have multiple beliefs about health. India has both conventional and traditional beliefs about medicine and...

Hardship causes people to act in a different way. Some may pick to concede and flee from their issues. Others might try to combat and conquer the challenge in front of them. According to the poet Horace, adversity will trigger a person to reveal their real colours. Nevertheless, there are also cases where misfortune will...

Introduction Sergey Brin and Larry Page who were PhD Students at Stanford University met in 1996 and they came up with the idea of starting a search engine that they named BackRub. However on 14th September 1997, the two students renamed this search engine to Google and in the year 1998 this organization was launched...