Bel Canto, the setting is reflected off of the Lima Crisis, otherwise known as the Japanese embassy hostage crisis, which began on December 17, 1996. Bel Canto is a story on the events that happen in the house of a South American country’s vice president. It portrays the relationships of the characters and their feelings toward one another as well as explains the hostage situation. In the Japanese embassy hostage crisis, similar events took place, such as the actual overtake of a mansion which contained high-ranking military officials and others of a high social standing.

Both settings deal with the releasing of hostages in exchange for demands that were never met, which led to the resolution of both the Lima crisis and Patchett’s Bel Canto. Bel Canto reflects the historical Japanese embassy hostage crisis, although Bel Canto has a third person omniscient point of view of the occurrences on the inside of the mansion. Bel Canto imitates the incidences of the Japanese embassy hostage crisis.

The Japanese embassy hostage crisis was a 126 day hostage crisis where members of a revolutionary movement known as the Tupac Amaru Revolutionary Movement had taken over 600 hostages, a decent amount of which were high ranked military officials and other well-known ambassadors. The MRTA, led by Nestor Cerpa, took over the highly fortified residence of the Japanese ambassador. Cerpa proclaimed that he would release any of his hostages who weren’t involved with the Peruvian government, and they did so. The MRTA eventually release all the captives except 72 men.

The original plan of this takeover was to change the ways of the government. In Bel Canto, although the terrorists originally came to take the president, they were a rebellious group from the country and wanted changes in the government. The rebels demanded a few things in return for the safety of the hostages. They requested “The release of their members from prison; a revision of the government’s neoliberal free market reforms, and they protested against the cruel and inhumane conditions of Peru’s jails” (Japanese embassy hostage crisis).

In Bel Canto, the rebels have demands as well: ‘The terrorists having no chance to get what they came for, decided to take something else instead, something they never in their lives knew they wanted until they crouched in the low, dark shaft of the air-conditioning vents: opera. They decided to take that very thing for which Mr. Hosakawa lived. Both terrorists wanted demands out of their seizures of the mansions. In both Bel Canto and in the Japanese crisis, a Red Cross official was the ‘negotiator. He attempted to setup a barter system to which the terrorists would get supplies so long as they give hostages back in return. In the Japanese crisis, Luis Cipriani had worked on getting a deal that would allow the terrorists to be let go into Cuba as exiles. This negotiation failed, as did some of the consultations from Bel Canto. Messner, the negotiator, attempts to make several negotiations with the terrorists, throughout the novel. Although both mediators do try to work the situations out with the rebels, they are not able to meet the standards of the negotiations.

In the end of both Bel Canto and the Japanese embassy hostage crisis, the terrorists were killed. They were not done in the same fashion, although the hostages were saved. In Bel Canto, the terrorists allow the hostages to be outside, and one day while they are together, a group of government troops come and shoot all the insurgents, as well as Hosokawa. In the Japanese crisis, a military assault overwhelmed the rebels and forced them to either surrender or be shot and killed. Bel Canto is very much reflected upon the happenings of the Japanese embassy hostage crisis.

The similarities of the negotiations between the outside world and the mansions, the motives for invasion, and the format of how the situations end are all closely related. The book may not have total accuracy of the Lima crisis, although the internal view of the occurrences in the mansion provide a different side of the hostage situation. 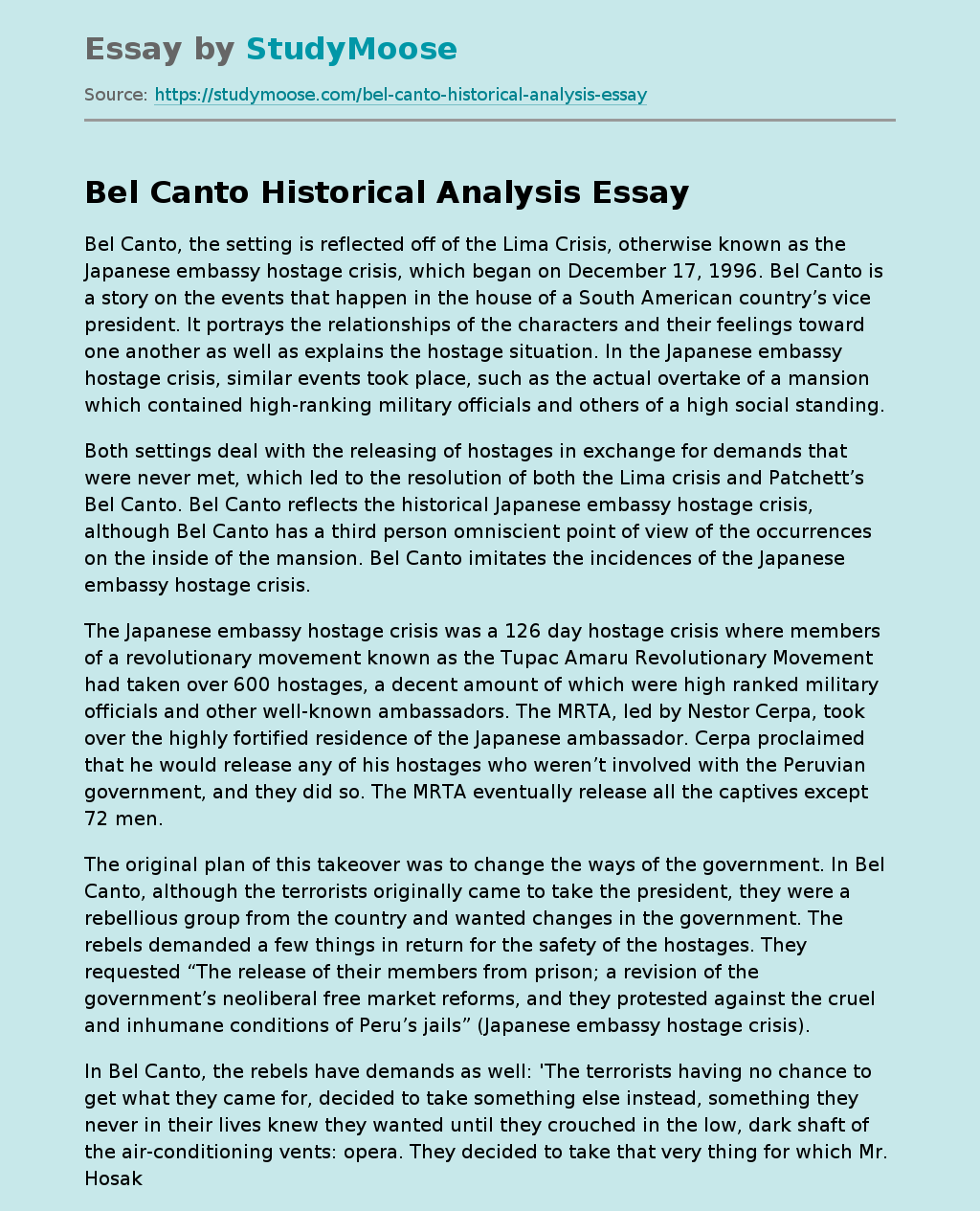