Being Human in Novel "The Catcher in the Rye"

Don't use plagiarized sources. Get your custom essay on
“ Being Human in Novel “The Catcher in the Rye” ”
Get custom paper
NEW! smart matching with writer

D. Salinger, a troubled sixteen-year-old boy, Holden Caulfield, is narrating his three-day exploration of New York City. It becomes apparent his world is corrupt and he is suffering from mental illness. In Lord of the Flies, by William Golding, British schoolboys are stranded on a tropical island. In an attempt to recreate the structure they left behind, they elect Ralph to lead with the intellectual Piggy as counselor, but Jack wants to lead, as well. Eventually one by one, Jack lures the boys from civility to the savage survivalism of evil hunters.

In Left to Tell, by Immaculée IIibagiza, the memoir describes her life as a Tutsi living in Rwanda up until, and during, the Genocide where Immaculeé spends three months in a tiny bathroom along with seven other women, as everyone around her is being viciously murdered by Hutus. All of these novels show different perspectives on what it means to be human. Through these stories, the authors portray being human as enduring personal hardship, having a natural inclination towards negativity, and forgiveness.

In The Catcher in the Rye, Holden demonstrates personal hardship as being human. Throughout the novel, he narrates the parts of his life that bother him. One example of a hardship Holden endures is, the death of his younger brother, Allie. Holden describes his life beforehand as rather happy, and when faced with the painful realization that he must live without Allie, Holden “sle[eps] in the garage the night [Allie] di[es], and br[eaks] all the goddam windows with [his] fist, just for the hell of it.” (Salinger 21) Later in the novel, Holden’s struggle with Allie’s death remains. Holden begins to seek out Allie through his mental illness. He walks along Fifth Avenue begins to believe that he will not be able to reach the other side of the street. Shortly after, he calls out to Allie for help saying “Allie don’t let me disappear, Allie, don’t let me disappear.” (106) This shows that as a result of Allie’s death, Holden can no longer function as a normal human. Stuck in a rather corrupt, depressive and destructive state, Holden faces another hardship the fear and rejection of adulthood. Holden sees childhood as the ideal state of being and struggles to hold on to the part of him that is still a child, while having to make the transition to adult responsibilities. Observations can be made about his constant struggle with the adults that he encounters as being “phony and superficial” (46) while he views children as innocent and moral. This is shown when someone writes “fuck you” on the wall, it “[drives] [Holden] damn near crazy” because he thinks “how Phoebe and all the other little kids w[ill] see it, and how they’d wonder what the hell it meant.” (108) Holden’s affection for the innocence and purity of children creates a barrier between childhood and adulthood. This makes it difficult for him to overcome his perception of the world and who he is now. Perhaps the best example of this is when Phoebe asks Holden what he likes. Holden’s initial response was that he “like[s] Allie” (92) He justifies his reasoning for liking someone who is dead because Allie is “a thousand times nicer than the people [he] knows that’er alive and all.” (171) Here, Holden demonstrates a deeper attachment to his dead brother then to the living. Although he has not seen his brother in years, he still considers Allie to be nicer then the people he interacts with in the present day. Holden looks at his his past as the better time in his life rather then what is yet to come resulting, in challenging hardships for Holden to overcome.

Secondly, In Lord of the Flies, the author illustrates being human as having an urge, and inclination towards negativity. Humans are neither innately good nor evil, but in William Golding’s view, evil is the inborn trait of mankind. The boys on the island are stranded and alone consequently, without rules or structure they discover the true evil they are individually capable of. In the midst of their survival the beast becomes a prominent fear. However, the beast is not a tangible object that can be “hunt[ed] and kill[ed]” (111) rather, a symbol of a deeper evil within themselves that is described as a “snake like creature in the trees.” (124) This is shown when simon predicts that there is a darkness lurking among the boys on the island as they slowly evade civilization. He realizes that “there is a beast” and “maybe it’s only [them].” (68) In addition to the beast the character development of all of the boys but more specifically Jack, is a main detail to the savagery and evil in the novel. At first, the boys understand they need to have rules and obey them because according to Jack they “we’re not savages.” (33) Despite the effort to establish civility, Jack’s desire “to track down and kill” was “swallowing him up.” (38) Jack “bec[omes] absorbed beyond mere happiness as he fe[els] himself exercising control over living things.” (46) At the start of the novel, Jack was aware of their sense of moral, but towards the end Jack’s true nature that was subdued by culture and civilization becomes apparent.

Lastly, in Left to tell, Immaculée demonstrates forgiveness as an essential part of being human. The Rwandan genocide was among the worst of genocides, yet, it “taught [Immaculée] how to love those who hated and hunted [her].” (36) Immaculée goes through a spiritual journey and in the end achieves forgiveness and peace. She begins in the bathroom as scared and angry, each day “[her] anger [is] replaced by fear” (90). Throughout her time in the bathroom, Immaculée strengthens her relationship with god. She spent days on end “praying her rosary” (235) and asking for Gods love and forgiveness. Upon praying Immaculée comes to the realization that “[she] couldn’t ask God to love [her] if [she] was unwilling to love His children.” (242) After she envisions this Immaculée makes it her goal to love those who have committed the heinous crimes in her hometown. Immaculée goes on to recognize that “[her] heart and mind would always be tempted to feel anger, blame and hate” but “resolves that when the negative feelings came upon [her].” (504) Because Immaculée’s “malignancy was gone” (504) she achieves forgiveness and no longer feels the pain preventing her from recovery after the terrible genocide and the death of her loved ones.

In summary, being human is not just one emotion or trait rather displayed as a plethora of different ideas and feelings. The novels including, The Catcher in The Rye, Lord of the Flies, and Left to Tell, have shown, personal challenges, the inborn inclination towards evil, and redemption as all parts of being human.

Being Human in Novel "The Catcher in the Rye". (2021, Jan 28). Retrieved from https://studymoose.com/being-human-in-novel-the-catcher-in-the-rye-essay 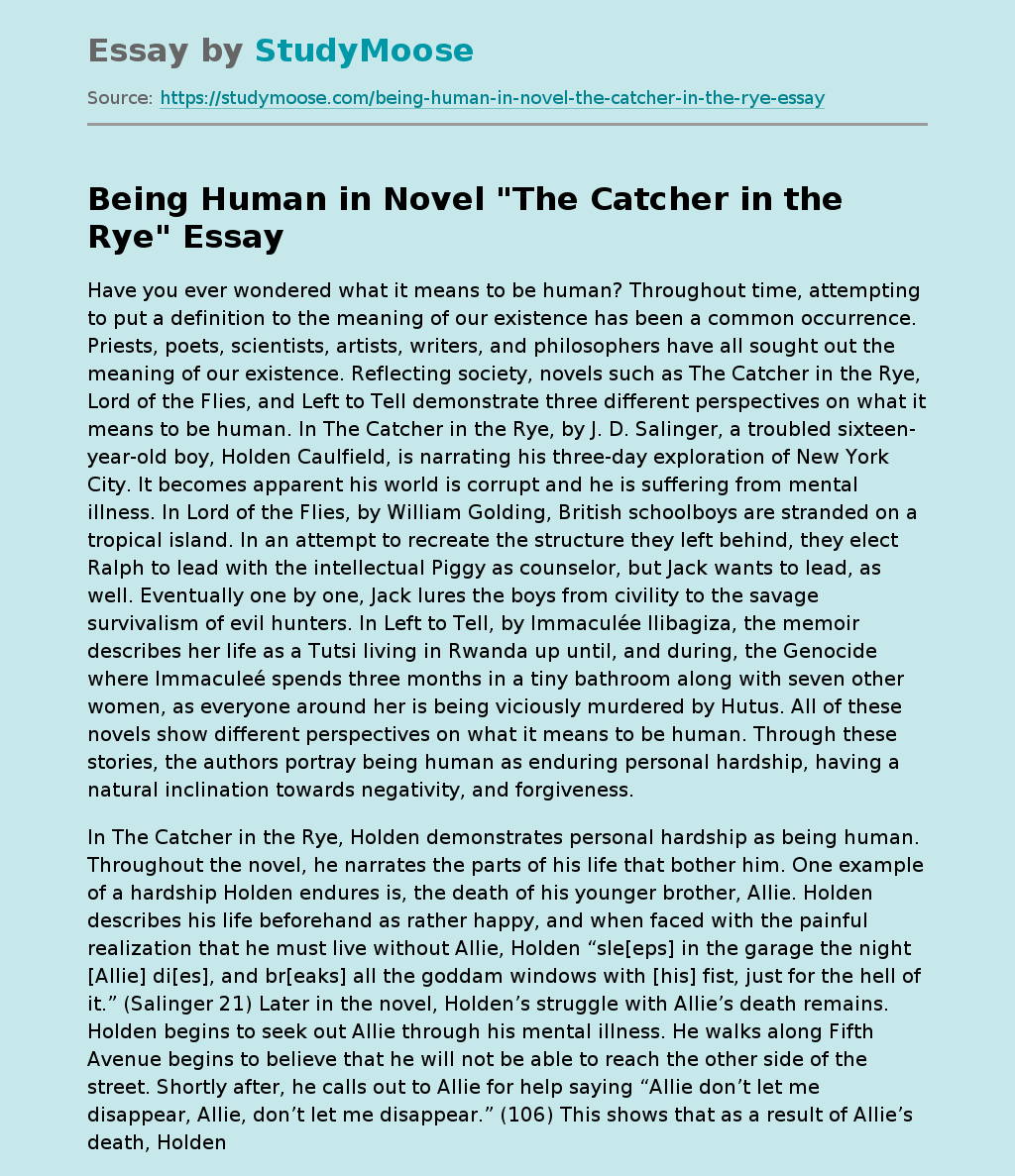