Describe the range of behavioural, emotional and social difficulties that children and young people may experience and how they can affect speech, language and communication development

The special education needs (SEN) code of practice describes BESD as a learning difficulty where children and young people demonstrate features of emotional and behavioural difficulties such as: Being withdrawn or isolated – which means they are less likely to start conversations, they play alone more and are less liked by others in their class. Making and keeping friends is difficult if you have poor communication skills.

Don't use plagiarized sources.
Get Your Custom Essay on Behavioural, emotional and social difficulties Just from $13,9/Page

Children often choose friends who are good at communicating, so children with difficulties are doubly disadvantaged. Poor interaction and increased withdrawal may also lead to poor self-esteem again affecting their confidence in speaking and communicating with others.

Displaying a disruptive and disturbing nature – For some children, behaviour problems may frustrate access to the curriculum, for example if aggressive behaviour leads to exclusion from some activities or from the school.

For others, a learning difficulty may lead to or worsen behavioural and emotional difficulties, for example, a child who has difficulty in grasping the basics of literacy or numeracy may withdraw from lessons or try to divert attention away from the learning difficulty by disruptive behaviour. Being hyperactive and lacking concentration – These children may be slower to learn things than other children because he or she can’t pay attention and concentrate, sit still, or remember things and therefore have difficulty interacting with their peers having an effect on their speech, language and communication development.

Having immature social skills – One of the possible reasons is that the child’s general developmental is below that of his/her peers. If so, immature behaviour might be expected in many areas of development, not only social relations. These children often miss some of the subtleties of social interaction that children understand more and more as they mature. The term behavioural, emotional and social difficulties (BESD) covers a wide range of special educational needs. This includes children and young people with emotional disorders and conduct disorders/hyperkinetic disorders – including attention deficit disorder or attention deficit hyperactivity disorder (ADD/ADHD). ADD/ADHD can affect a child’s learning, behaviour and development. Symptoms include fidgeting, not being able to focus or pay attention, being impulsive and hyperactivity.

Many problems children with ADHD face have a direct relationship with poor social and communication skills. BESD also covers children and young people whose behavioural difficulties may be less obvious. For example – those with anxiety, who self-harm, have school phobia or depression – these could be due to the continuous feeling of self-worth, low-self-esteem because they cannot communicate properly and those whose behaviour or emotional well-being are seen to be deteriorating – this again could be to the continuous feeling of self-worth or/and because they have difficulty in relating to other people and understanding what is ‘expected’ of them. This will affect every aspect of development. Children who suffer from behavioural, social and emotional difficulties (BESD) struggle to overcome trust issues which makes forming relationships with peers and adults incredibly hard. The nature of BESD means that those who suffer from it face barriers in their educational and social development, such as ‘learning difficulties’.

Incidence of BESD is higher in socially deprived inner city areas and affects more boys than girls. Children who have other learning or development difficulties, such as speech and language problems, are also more at risk. Early childhood experiences can have a major impact on later development, with the lack of a positive attachment to an adult being seen as particularly detrimental to some children. Whilst social circumstances can also impact on development, parents are the biggest influence on a child’s development. Children who experience family difficulties, including parental conflict, separation, neglect, indifference or erratic discipline, are more likely to develop BESD. BESD has a negative impact on a child/young person’s speech, language and communication development (SLCD). Children with specific language impairment (SLI) have been reported to experience concurrent difficulties in the area of social and behavioural development.

This has often been thought to arise from such factors as frustration, peer rejection, and lack of confidence in the face of poor linguistic skills. Studies have shown that substantial proportions of children with SLI experience social and behavioural problems as they reach high school age and that these problems increase over time. Many children with SLI appear to show withdrawn social interaction styles. This may include being less likely to initiate conversation, playing alone, and being liked less by others in the class. Poor interaction and increased withdrawal may also lead to poor self-esteem. 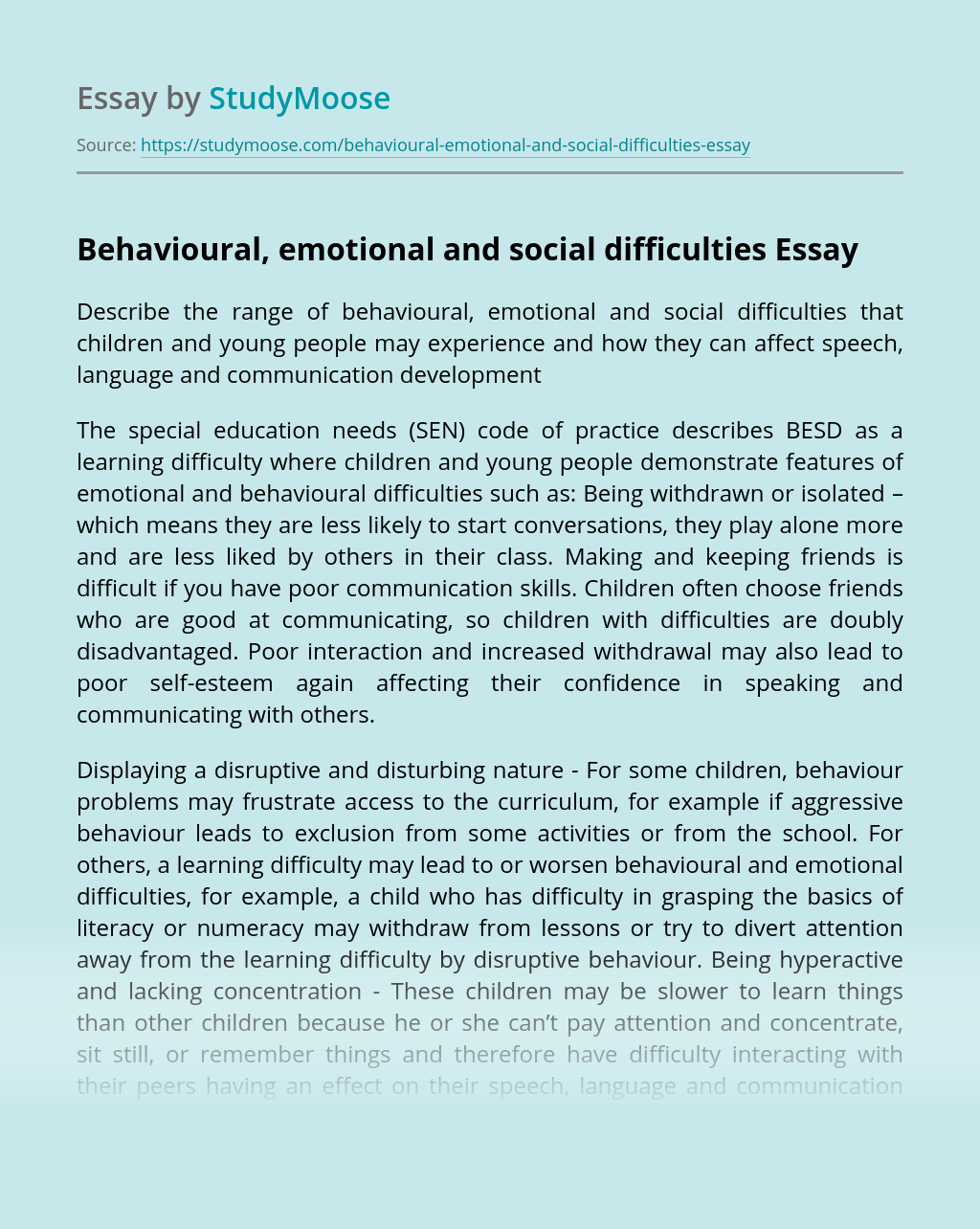 Effective role model for the standards of behaviour

To insure that I am an effective role model for students I would promote good behavior skills, as if I felt any negativity I would deal with if quickly and effetely away from the classroom. To ensure that I am working in a positive way, good leader skills and knowledge is an important factor between... VIEW ESSAY

At Roseberry Primary School we seek to encourage a calm, purposeful and happy atmosphere where good relationships exist within a caring environment where all children are the opportunity to achieve their potential. Children are encouraged to develop independence and self-discipline in order to enable them to accept responsibility for their behaviour. A consistent approach to... VIEW ESSAY

Organizations are complex systems which rely on people, structures and technology to achieve their goals and objectives. They are created to serve the needs of the societies or communities in which they operate and are influenced by both their internal environment (culture) and their external environment. As defined by Robins “an organization is a continuously... VIEW ESSAY

View sample
A New Kind of Dreaming by Jamie Riley

Jamie Riley changing for the better throughout the novel ‘A New Kind of Dreaming’ is thanks to many of the events throughout his stay in Port Barren. The courts sending Jamie to Port Barren on Isolated Care, I find, is the best thing they have done for him. Even though he was targeted, threatened and... VIEW ESSAY