While analyzing the formation of habits using behavioral and social/cognitive approach I will use personal scenarios to back my research on how habits form personalities. I will provide the reader with sequence of developmental habits and role models if any that contributed to the formation of my own habits. Next, I will discussing the reason why I’ve continue to repeat these habitual acts and how I have succeeded in break the negative habit. Then using the behavioral personality theory and the components of social/cognitive theory I will explain why and how I developed these habits.

Don't use plagiarized sources. Get your custom essay on
“ Behavioral and Social/Cognitive Approaches to Forming Habits ”
Get custom paper
NEW! smart matching with writer

Last, using supportive facts from course readings of chapter six and seven with online citing and facts, I will compare the theories behavioral and social/cognitive and develop my own hypothesis on which theory I believe best describes my personality. When developing habits the self conscious mind forms an image to what it perceives to be a positive emotional connection, satisfaction, or rewarding feeling.

Thus rejecting the negative approach and replacing it with capitalize or self sufficient compensation. The conditioned response would occur in response to stimuli that were similar to the conditioned stimulus, indicating that there was generalization of the conditioning, but the conditioned response would not occur for all possible similar stimuli, indicating the difference between different stimuli; this is called discrimination.(Friedman & Schustack, p. 187, 2012) Growing up I developed a few positive and negative habits that has helped me shape my personality and image. The positive habit being basketball and the negative habit being smoking.

When I was about four or five years old I would watch basketball games with my cousins on television. At the time I don’t understand what was really going on, but I did know that all I wanted to do was dribble a basketball.

Whenever I had a change to dribble a ball, any ball I did. By the time I was ten years old I was able to dribble with both hands in an equal manner, basically hiding any dominate traits of my left hand dribble. At the age of seven I discovered the ultimate basketball player that lives to this day, Michael Jordan! I wanted to be like Mike, but the female version. Becoming the first woman to play basketball in the NBA. Losing the opportunity when the WNBA was developed and I was only about fifteen, I just settle with being the best that I could be. In high school I was consider popular because I was on the basketball team, but to me the popular students where the one’s everyone knew the seniors and juniors. During my sophomore year the older students started to notice me because of how well I played on the freshmen JV squid the year before. I was now on the varsity team and I wanted to fit in with the rest of the popular students. Some were a great influences and some weren’t. The wrong influences had me try cigarettes.

At first it was cool, but I hated the taste and I notice that my breathing wasn’t the same so I quit, but quickly developed a new habit. I began to use smoking as a cover up of my feeling of my relationship with my mom, but it was no longer cigarettes I had moved up to marijuana. I continued doing both habits for a very long time mentally training myself to smoke only on the weekends or breaks during my seasons of basketball and other sports I played. I was an A-, B+ student never causing any issues at home with my grandmother and going to church every Sunday, but like my grandma always said “eventually what in the dark will come to light.” I never truly notice how the weed was affecting me grades and social life. During my senior year in high school I was hanging with pot heads and barely going to class if I went to school. My A- and B+ were now B-, C’s, D’s, and a few F’s. It also started to effect my playing the coach would just let me sit on the bench until I was ready to play. This was a very sad situation because M had been excepted to Syracuse University with a full ride as long as I keep me grade up and continued to flourish during the next basketball season.

After losing my scholarship because of my grades slipping and my lack of participation on the court that year I know I hand to stop the weed habit because it was causing me to lose everything I worked hard to achieve. Quitting the marijuana habit I was able to go to the local community college and working my way back up the scale. I never got back the basketball scholarship opportunity, I did grow up to become a physical education teacher who also coaches basketball now and has been an undefeated Charter School Girls champion for four year straight. Living me with the only habit of my love for basketball and teaching my developed skills to other potential basketball star athletes. Use the behavioral personality theory to explain why I had a smoking habits it has come to my attention that my smoking habit only occurred because I made it a routine act in my life. By giving the sustain a meaningful generalization of why it was needed created a repetitive action of usage that had a true meaning.

For example, this form habit could be compared to taking a shower, a essential act that must be preformed daily. “Consistency of everyday established life habits or behavioral dispositions to repeat well practiced actions given recurring circumstances.”(Smith, 2012, para.2) Through components of social/cognitive theory my habits may have formed because of my daily interaction with the wrong associates and environment. By constantly being around people who smoke cigarettes and marijuana it became a negative influential social gathering. Learning occurs in a social context with a dynamic and reciprocal interaction of the person, environment, and behavior which unique feature of SCT is the emphasis on social influence and its emphasis on external and internal social reinforcement.(“The Social Cognitive Theory,” 2013). When I decide to quit smoking I remember looking down at the joint in my hand and saying “this isn’t going to solve my problems it just seems to make things worse” and I vowed to never smoke again and I’ve been drug free for thirteen years with no urge to ever smoke again.

Unfortunately everyone do not have as strong of a mind set as I had and must develop a plan that applies operant conditioning to change their habit. If I had to create this plan for me the first thing I would do is develop a goal in which I feel is a reasonable amount of time to quite, let’s say thirty days. Next I would give myself a daily amount in which I can smoke and find a substitute of gum chew, healthy snack, or fun activity to do whenever I get the urge to smoke outside of my scheduled time. Each week I would make my intake smaller and increase my substitution activities until the urge has complete vanished. The decreasing of the substance is known as the extinction process that frequency of the organism’s producing a response gradually decreases when the response behavior is no longer followed by the reinforcement (Friedman & Schustack, p. 188, 2012)

The social cognitive theory of personality must be deployed in two stages, first develop awareness of problems and develop the motivation to change, and second involve the actual plan and implementation of change behavior. (Smith, 2012) After learning about the process between the behavioral and social/cognitive theories, I can say that both theories do represent part of my personality and cannot devote myself to any particular theory. I truly feel even though I may have started smoking because of who I socialized with. I do believe I only continued on with the addictive behavior because I made excuses for the behavior, creating my own valid reason to repeat this social substance abuse act even on my own. In conclusion I believe that both theories have a very strong base, but doubt that any real person can consist of only one theory when it comes to forming normal or additive habits. 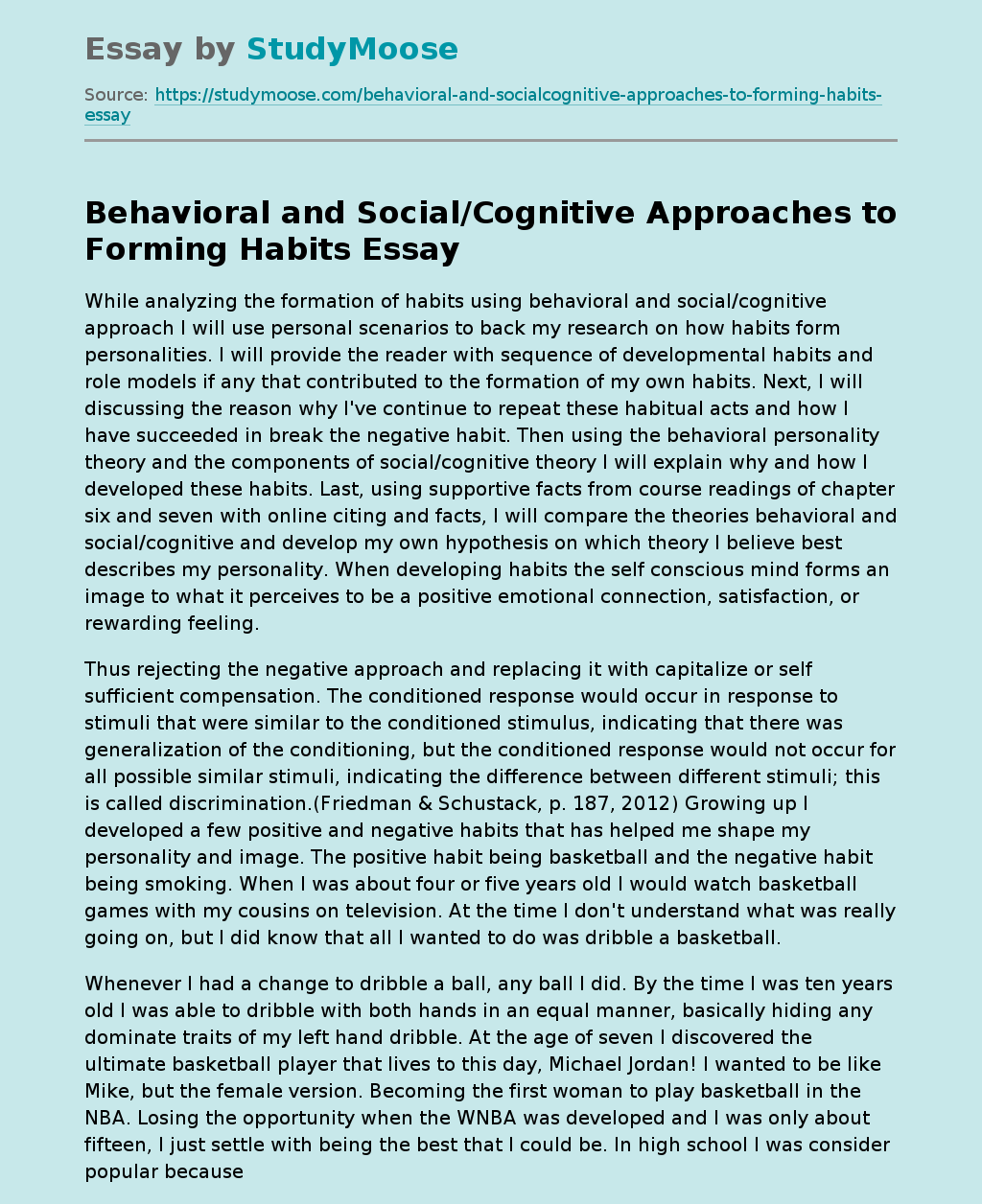