While many men and women throughout history have made significant, valuable and lasting contributions to society, Ludwig Van Beethoven is an especially remarkable figure worthy of special note because he embraced and devoted his whole life to music. Born to a drunkard father and an unhappy mother, the young Beethoven was exposed to a brutal training in music at the hands of his father, who hoped that the young boy would prove to be another prodigy like Mozart. Ludwig Van Beethoven’s music set the 18th century Traditions and were shaped and molded because of the great composers Mozart and Haydn, who taught and raised him up in his musical capabilities (Ludwig Beethoven).

Don't use plagiarized sources. Get your custom essay on
“ Beethoven Research Paper ”
Get custom paper
NEW! smart matching with writer

Beethoven’s success was measured by his devotion, Beethoven dropped out of grade school by the age of ten to study music full time with Christian Gottlob Neefe. March 26, 1778 Beethoven performed his first piano recital at the age of seven; at the twelve years of age Beethoven published his first composition made up of Piano Variations (Ludwig Beethoven).

Throughout the years Beethoven began to experiment with different styles and genres of music, the styles changes can be heard in his symphonies, String quartets, and Piano Sonatas. At a young age Beethoven requested to be an assistant court organist, because of his young age Court officials were hesitant but accepted him (Ludwig Van Beethoven).

Through his young years of his life, it is clearly evident to how devoted and passionate he was when it came to music. Through the musical years and compositions of Ludwig Van Beethoven, Beethoven gave opening to his own dramatic musical voice.

Through Beethoven’s adulthood he faced many trials and tribulations. But Beethoven always used his problems as a stepping stool to become stronger and better at whatever he did, and at the same time he was composing his great and memorable works, Beethoven was struggling with the fact that he was going deaf (Ludwig Van Beethoven). In 1801 Beethoven confessed this horrible news to Franz Wegeler, a German physician from Bonn, German; the same place Beethoven was born.

He wrote, “I must confess that I lead a miserable life for almost two years. I have ceased to attend any social functions, just because I find it impossible to say to people: I am deaf. If I had any other profession, I might be able to cope with my infirmity; but in my profession it is a terrible handicap” (Ludwig Van Beethoven). Miraculously, despite his increasing deafness, Beethoven continued to compose. From 1803-1812, these years are what is known as his “heroic” period (Ludwig Van Beethoven).

He created so much music, proving people nothing could stop him. He composed an opera, 6 symphonies, 4 solo concerti, 5 string quartets, 6 string sonatas, 7 piano sonatas, 5 sets of piano variations, 4 overtures, 4 trios, 7 sextets, and 72 songs (Beethoven, Ludwig van). Despite his amazing output of beautiful music, Beethoven was lonely and always miserable throughout his adulthood. Beethoven never married or had children (Beethoven, Ludwig van) and somehow, despite his wild personal life, physical disability, and complete deafness, Beethoven composed his greatest music.

String quartet NO. 14 contains 7 linked movements without a break (Ludwig Beethoven). Beethoven’s adulthood was a crazy rollercoaster but in everything he did, he was always dedicated and did everything whole-heartedly. A quote by Liszt, the Arch Romantic, perfectly sums the impact and importance of Ludwig Van Beethoven to not only the music community but also to the history of music itself.

“To us musicians the work of Beethoven parallels the pillars of smoke and fire which led the Israelites throughout the desert, a pillar of smoke to lead us by day, and a pillar of fire to light the night. His darkness and his light equally trace for us the road we must follow, both the one and other are a perpetual commandment and an intolerable revolution.” 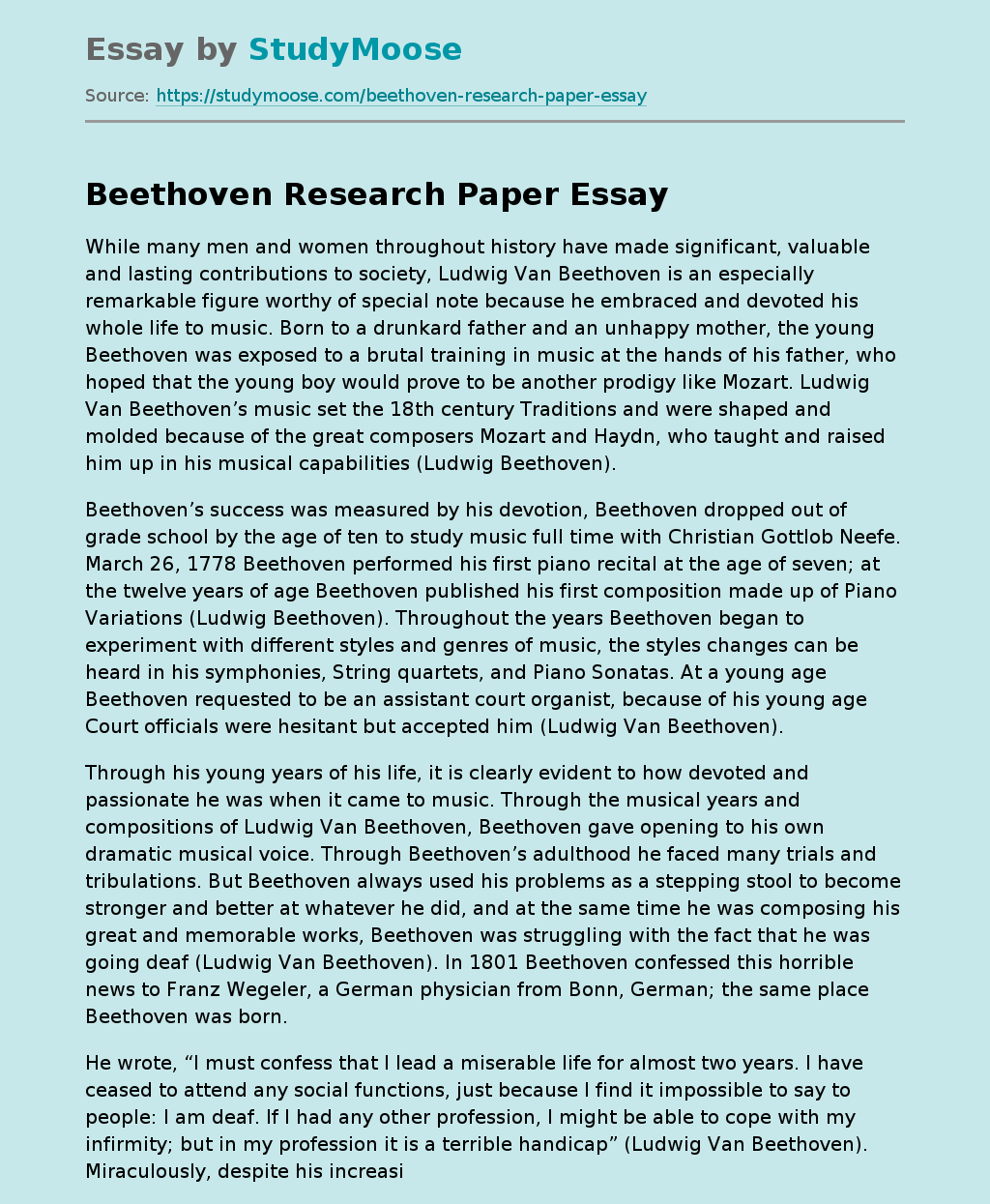