Beethoven’s Individualism in The Music World

You can realize that he probably wasn’t the easiest of people to be with. Impressive, certainly; exciting, perhaps; but rarely cosy and good-natured. This might be the common impression about this talented composer. Ladies and gentlemen, in my today’s speech I’m going to inform you about Beethoven’s individualism with two parts.

There are many stories of how he did not take crap from the nobility. He removed Napoleon from his dedication of his third symphony after Napoleon declared himself to be royalty. He heard thunder on his death bed, raised up and shook a fist at it before expiring saying that I will take fate by the throat. And so on. Here, Individualist I mean is not in general context with any derogatory sense, but Beethoven devoted himself to fighting for individual’s fate and freedom, personal dignity and equality.

As Beethoven said Music is the mediator between the spiritual and the sensual life.

His individualism spirit also presented in his artworks, which have five specific features: passion, power, pride, freedom and independence, and makes him become one of the greatest composer in the world. Stravinsky once said his individualism like this : “Beethoven is the friend and contemporary of the French Revolution, and he remained faithful to it even when, during the Jacobin dictatorship, humanitarians with weak nerves of the Schiller type turned from it, preferring to destroy tyrants on the dramatic stage with the help of cardboard swords.

Beethoven, that ordinary genius, who proudly turned his back on emperors, princes and magnates – that is the Beethoven we love for his indubitable optimism, his virile sadness, for the inspired sympathy of his struggle, and for his iron will which enabled him to seize destiny by the throat. ” Romain Rolland evaluated him as: Perhaps he was unfortunate, poverty, disability, loneliness and pain continue to hover over his fate, but he still could see the dawn – the world did not give him happiness, he is a source of pleasure and power!

He is the brave souls of all the world wrote the best motto – happy with the pain in return. So much for this point, I would now like to shift to the controversial of Beethoven’s individualism. Actually, as an individualist, Beethoven sometimes magnified his personality to a level of disgust. The highly praise in Romain Rolland’s masterpiece cover up some of Beethoven’s disrepute behaviors, which mislead us away from a fully recognize of him. After reading some biographies and periodicals, I find he has really bad temper and absolutely not a perfect person.

In order to show off his own talents, he described his variations on Mozart’s work as “I should never have written down this kind of piece had I not already noticed fairly often how some people in Vienna after hearing me improvise one evening would next day note down several characteristics of my style and palm them off with pride as their own. But there was another reason, too: my desire to embarrass those Viennese pianists, some of whom are my sworn enemies.

I wanted to revenge myself on them in this way because I knew beforehand that my variations would here and there be put before the said gentlemen and that they would cut a sorry figure with them. ” There are still many examples, but I think this one is enough to proof Beethoven’s arrogant. And Beethoven’s personality problem is also why Tchaikovsky admired him but did not love him…. that love was reserved for Mozart…. respect to these two genius’s personality, he thought of Beethoven as the Jehovah of music while he thought of Mozart as the more approachable Jesus

So, to sum up, I have to say I won’t bias Beethoven’s achievements for his personality problem, that’s not an objective attitude. What I mean is that, it is necessary to have a fully recognition on Beethoven, so that we can really understand his music. Even though his over-individualistic personality makes him an arrogant and unpleasant genius, his spirit and art works are still highly admired generation by generation. That’s all. I hope I have made myself understood. Thank you for your attention.

Beethoven’s Individualism in The Music World. (2018, Oct 25). Retrieved from https://studymoose.com/beethoven-informative-speech-essay 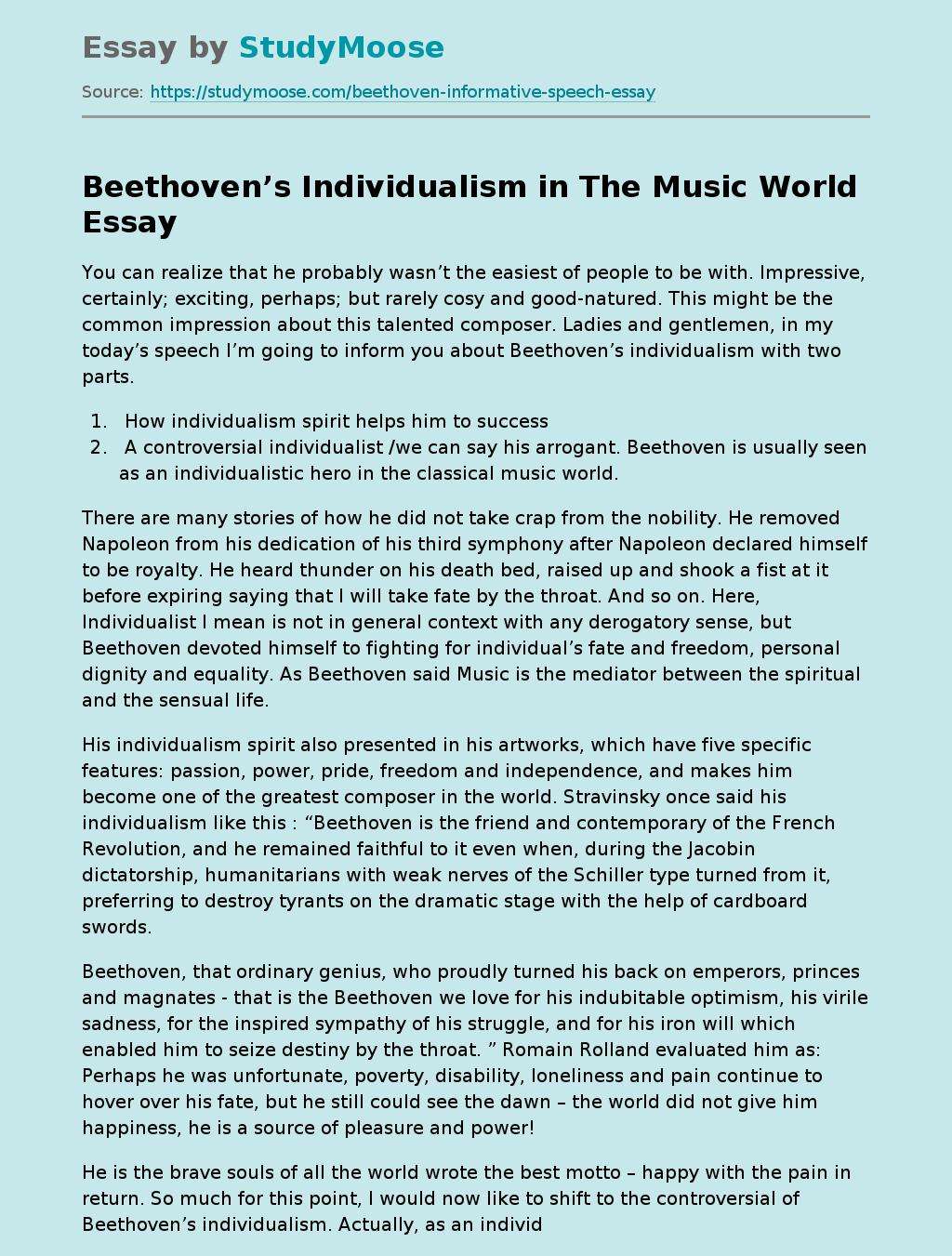