Becton Dickinson a manufacturing company, with operations worldwide, and revenues of over $2.7 billion was founded in 1897, and had ten core businesses organized into two product sectors: medical and diagnostic. Mainly US domestic operation was beginning to give way to expanding international sales, warranting a separate division in Europe. By 1970s, the company was organized by business divisions centered in US and focusing on the largely domestic US market, and an International sector. Since most revenues were earned from the domestic market, priority tended to be domestic, which frustrated managers in foreign countries who wanted to focus more on the resources on their local market.

Going international, better said, transnational was the beginning of an evolving problem that Becton Dickinson would face in the upcoming years.

Becton Dickinson and Company (BD) was a supplier of medical products and diagnostic systems to healthcare professionals, the medical industry, hospitals and the general public which included mostly medical gloves, hypodermic needles and intravenous catheters in the medical sector.

Blood collection devices, automated systems to detect and identify bacteria and blood cell analysis systems were one of the few diagnostic products that Becton Dickinson produced. During the 1970s BD’s managers did not really take the international market as serious as they should do. Orders were only processed, when the domestic ones were filled out and completed. Furthermore, the managers’ refusals to accept and consider new product requests from abroad were a big threat to the company. In 1980, BD’s senior executives decided to take attempts to develop products and strategic ways to meet the worldwide demands of marketing needs for medical technologies.

The competition did not sleep and started expanding into Europe, which began to be another threat to Becton Dickinson not only for the international sector, but also for the US market.

Realizing this, BD started to build European Strategic Business Units (SBUs) that reported to the headquarters in the US. Growing concerns about emphasis given to international sales, especially with European managers voices becoming loud, concerns led to a study senior management’s readiness to consider a new structure of BD’s worldwide activities. A consulting firm offered two structural solutions: “The Worldwide Product Division” and “Europe as an Equal Partner”, which was appealing as a way to ensure greater dedication of resources to Europe, but also threatening to duplicate efforts and costs, with the danger of different strategies slowly emerging in each division.

After meeting with Harvard professor Christopher Bartlett and his colleague Sumantra Ghoshal “The Transnational Solution” was born in cooperation with the senior managers. The solution has three faces to it. The first was the challenge faced by MNCs to simultaneously achieve global efficiency, local responsiveness and worldwide innovation. The second was that these objectives needed an environment of international differentiation and asymmetry. Thirdly, they advised firms not to merely change formal reporting lines, but to focus on underlying cultures and values.

A typical chain reaction was, that these circumstances affected how Becton Dickinson faced a challenge in implementing a structure that would overcome challenges posed by the growth of business outside of USA. Lack of clear vision and goals by previous management, a lack of clear articulation of the same to second line management and other employees down the chain of command are just some of the few problems that BD had to solve.

Changes to the existing organizational structure. A change to the existing structure is urgently needed, so that there’s a shift from a corporate mentality to an organization driven by Strategic Planning. This would include meeting the need for a global collaboration and local flexibility that they so badly needed as a fast growing multinational company. Managers and company itself were not prepared, which the case showed, and the lack of anticipation for the need of a suitable structure for a growing company then led to the issue, of quick fixes.

This means that whenever managers in other parts of the world were discontent, only then did top management in the US would start to respond and make quick fixes to structural issues. Cooperation and commitment between top management, middle management and employees is another important part of the change. With no cooperation, and divisions going in different direction the company soon showed signs of urgent need for structural re-designing.

Disadvantages to this re-designing could result in a complete departure from the existing task based matrix structure, while others wanted to retain the structure but with minimum changes. This could as well lead to dissatisfaction within the managers and even employees. Secondly, another problem to restructuring is how well conflicts are managed or avoided all together as the company continues to have more divisions out of its central control.

Open Research and Development plants in Europe and Japan. With the more and more growing market in these two sectors, Becton and Dickinson should focus on creating R&D centers within these areas and not only in the US with organizations in non-US divisions. Kozy’s thoughts about the future should also include that the European sector is an immensely fast growing one. Within seven years the net trade sales increased by over a $100 million, whereas the US sector increased by “only” $80 million. Looking at the numbers, you can see that Europe is on the move. A Research and Development center in England, for example, would help to produce local needs and act faster than going through the whole process of talks with US R&D departments and the European R&D organizations.

Knowing that with Dufresne BD has a “champion” on its boat, he should be able to set up his own team of researchers, build a real Development center and take some things in his, better said, the European division’s hand. Japan not to exclude, which has also rising numbers and different marketing needs would also profit from an own R&D plant. Different needs require different solutions, therefore having the US as the only R&D plant, will not help the company nor its divisions. Even with regional R&D managers, like Dufresne, and R&D organizations outside the US, he still does not have team to work and interact with on a day-to-day basis. This would also help to accelerate new product development and quality standards, while maintaining the current distribution systems

Budget restrains are a major disadvantage in BD’s case. Total expenses are high in Europe and the numbers jumped in the years from 1985 – 1992 from ca. $10,000 to a high $31,000. The plant would not only bring extra costs, but land had to be bought, people would have to be hired, and machines would have to be purchased. Another negative aspect looking at a plant in Europe or Japan would be the loss of power that the US headquarters and R&D currently have. Becton Dickinson’s US division still wants to have a certain power over its foreign ones. Therefore giving up the R&D department to a certain extent would not be everyone’s favorite in the senior management’s committee.

Give Europe and Japan divisions more operating power. As for now, BD’s European and Japanese divisions are quite under the control over the “parental” guidance and supervision of the US division. The evolution from this classic structure to a new transnational company is a very important part in the future of Becton Dickinson. Even with the introduction of World Blood Collection Team (WBCT), I think that a division in itself should have more power in deciding which products to introduce, which marketing steps should be taken, etc. In the early 80’s the Japan division suffered from not being heard upon on what is need in this division. BD lost small market share in that time.

The WBCT illustrated in Exhibit 8(p. 385) illustrates the Strategic, the Operations and the Marketing Team within the whole company including the whole World Blood Collection Team. In my eyes, a smaller group separated in regional divisions would help the success of the company. For example, they could combine the President BC Europe, the Director Manufacturing Europe and the Director of Marketing Europe in one group to run the regional division Europe. They would then have the power to decide which steps should be taken, what to manufacture and how and where to do the marketing.

The negative aspect of this approach is that this might leave the path that WBCT and BD in general have taken up until now and again this alternative might run into problems and dissatisfaction with the headquarters. It could also lead to complete separation of the diverse division from the headquarters mission and plans on where the company wants to go.

Looking at Becton Dickinson’s past and the way they used to business, the best alternative would be the first one mentioned of the three. Changes to the existing organizational structure, which is also part of the third alternative, would be affecting the outcome the most. The way the company will be working, how the employees will be situated within the company and most importantly how the whole company will be structured, not just domestically, but in the transnational field, is what makes them more competitive.

It would appear that the phenomenal growth of the business was an ambition in the managers’ plans, but they did not make any efforts to construct a structure that would suit for a company whose operations were growing with big leaps. However, there is need to make some changes to the existing structure, so that there’s a shift from a corporate mentality to an organization driven by Strategic Planning. In order to create organizational learning, top management has to create a sense of shared purpose and belonging for all divisions and individuals in the company.

There is no better way to do it than to implement an organizational structure that allows and pushes free flow of information from division to division, and back to corporate headquarters without a feeling of restrictive set-ups. The main task of the top management is to shape behaviors of people and create an environment that enables them to take initiative and be more and more cooperative.

Another important step is to restructure systems to reflect a willingness to accommodate different geographical and product needs. The old system was structured to suit an operation around the US, and was only slightly changed to accommodate European operations, which were still not considered equal by the US headquarters. Now with sales and operations fully developed outside of the US, it is wise to decentralize some decision-making centers so as to allow for innovation, local responsiveness and flexibility. 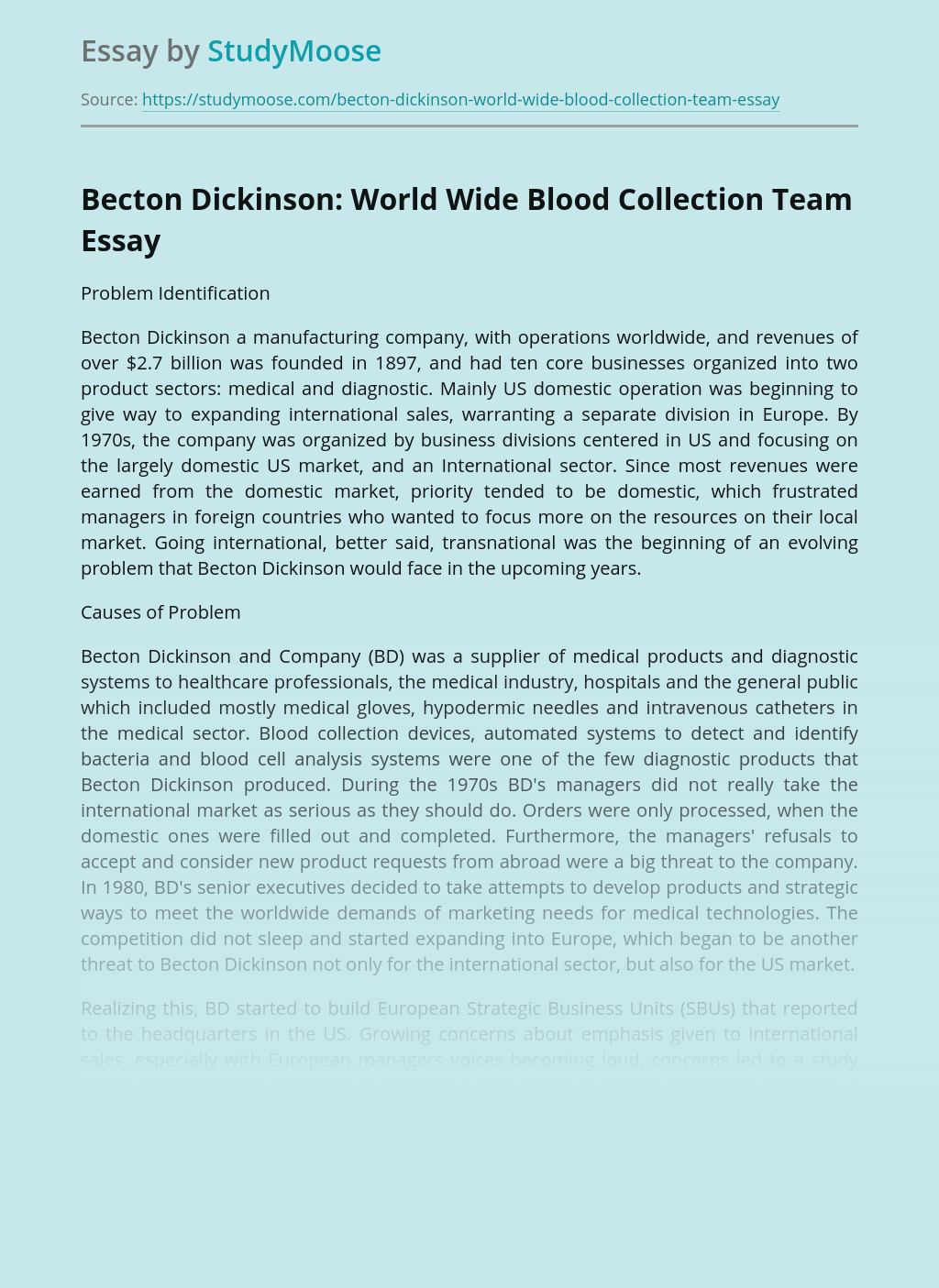