Eddie is becoming jealous because Catherine started to give the attention to Rodolfo, not Eddie anymore. Rodolfo sings to Catherine and she seems to really like it. However, the songs lyrics are very similar to the situation in this family at the moment. The song ”Paper Doll” which Rodolfo sings suggests the idea that Eddie loves Catherine which is not his own, also other fellows can steel her from Eddie when she goes to work. At this stage Eddie gets angry and tries to stop Rodolfo singing.

Don't use plagiarized sources. Get your custom essay on
“ Beatrice’s arms ”
Get custom paper
NEW! smart matching with writer

However, Catherine being so involved by his singing and she is already started to move from Eddie to Rodolfo, as we can see when Catherine says ”Leave him finish, it’s beautiful! He’s terrific! It’s terrific, Rodolfo. ” Catherine feels very embarrassed when Eddie says ”what’s the high heels for, Garbo? ”. (Page 21, line 34) Eddie doesn’t like when Catherine is wearing the high heels, it attracts sexually and he says to take them of.

In my opinion, Eddie has been threatened by Rodolfo because everything that Eddie does, Catherine is still on Rodolfo’s site.

Eddie tries to shows Rodolfo to Catherine and other members in the family, as he can’t do anything what a real man does. In the way, Eddie tries to portray Rodolfo as a homosexual. In Eddie’s opinion, only women cook and go to theatres, not real men. The reason why Eddie does this is that he thinks if Beatrice, Catherine and Marco notice that Rodolfo is homosexual he may have Catherine back as he had her in the old days.

Eddie did not showed the feelings to Catherine yet, however the audience can see that Eddie is very jealous of Catherine and this makes us realize what his feelings for Catherine are.

Catherine need for Eddie to like Rodolfo because if Eddie will be happy so will she. However, Eddie might remind himself sometimes when Catherine used to say ”Hi Eddie” and also ask his opinions about certain things. Now, that Rodolfo came, Eddie’s place has been taken and Catherine is reacting with Rodolfo in the same way as she used to react with Eddie. At the end of Act1, Eddie makes barbed comments, implying that Rodolfo is too friendly with Catherine and too casual with his money.

Eddie pretends to approve the fact that Rodolfo can cook, make dresses, and sing, before adding that it is wrong for someone with those skills to work at the docks. He offers to treat Marco to a night watching a prize-fight and then invites Rodolfo too, as we can see when Eddie says ”I’ll treat yiz. What do you say, Danish? You wanna come along? I’ll buy the tickets. ” Afterwards, Eddie starts talking about boxing and wants to teach Rodolfo how to box. This is clearly juts an excuse to punch Rodolfo, but Rodolfo takes it good-humouredly.

Catherine shows that she is more interested in Rodolfo’s safety than Eddie’s when she rushes to Rodolfo and shouts at Eddie by using his name. Marco seems to see what happened there and so he tries to embarrass Eddie, when he shows off his own strength to Eddie by lifting a chair by its leg with one hand. However, Eddie approves that he can do the same to, although when he tries it seems that Eddie can not lift the chair like Marco did. Couple of days just before Christmas, Catherine and Rodolfo are alone in the apartment for the first time.

Catherine then asks Rodolfo if they could live in Italy when they get married, but Rodolfo says that in Italy there is nothing and it would be ridiculous to go back to such poverty. When Rodolfo has comforted Catherine, Rodolfo says ”there’s nobody here now. Come inside. Come” and lead her to the bedroom. After a moment Eddie returns, drunk, and is aghast to see Rodolfo follow Catherine out of the bedroom. He tells Rodolfo to leave the apartment immediately. Catherine says that she will go too, but Eddie does not let her by saying ”No, you ain’t goin’ nowheres, he’s the one”. Afterwards two men start fighting.

After Christmas, Eddie returns to Alfieri and tells him what happened. Alfieri says to Eddie that there is nothing Eddie or the law can do to prevent the wedding. He gives advise to Eddie to ”Let her go. And bless her” meaning to let the couple marry, but Alfieri warns Eddie that there could be awful consequences if h didn’t. However, Eddie ignores Alfieri’s words and telephones the Immigration Bureau, anonymously, to betray Rodolfo and Marco. When Eddie comes home and finds out that Marco and Rodolfo moved upstairs already, he then asks where is Catherine, and says to Catherine ”She ain’t movin’ in with them”.

Beatrice then gets totally frustrated asks Eddie to stop talking about it. Afterwards, Eddie discovers that Marco and Rodolfo are with two other illegal immigrants upstairs, he becomes afraid and warns that they will be less safe from the authorities there. Eddie is now regretting the call that he made to the Immigration Bureau. In few moments the officers arrive. Beatrice and Catherine are shocked and immediately suspect that Eddie grassed on Marco and Rodolfo being in the country illegally. As the officers lead all four immigrants away, Marco and Rodolfo spits in Eddie’s face.

Eddie shouts to Marco ”I’ll kill you for that, you son of a bitch! ”. Later on, Marco retorts in front of neighbourhood that Eddie has stolen food from his children. Eddie then tries to protest that he is innocent but all the neighbours turn away from him. The reputation of both Eddie and Marco is now at risk. When Marco and Rodolfo and Catherine are with Alfieri in the room of the prison, Alfieri need a promise from Marco that he will not kill Eddie as a condition of bail. Marco later on says ”Maybe he wants to apologize to me” meaning that Eddie should apologize to him. However, he makes a promise to Alfieri.

On the day of the wedding, Beatrice wants to go with Catherine to the church, but Eddie says to Beatrice ”didn’t you hear what I told you? You walk out that door to that wedding you ain’t comin’ back here, Beatrice”. Catherine is angry at Eddie and therefore says to Beatrice ”how can you listen to him? That rat! ” Rodolfo arrives to take Catherine to the church; he says that Marco is at the church praying. Eddie wants to get with Marco, for ruining his good name in front of neighbourhood. Beatrice then tries to calm him, and says to him ”you want somethin’ else, Eddie, and you can never have her!

” Eddie’s reaction to this is shocked and this truth frustrates Eddie even more. Marco arrives, shouting Eddie’s name. Eddie goes to meet him in the street and asks public apology. As a substitute, Marco calls him an ”anima-a-a-l! ”. Eddie draws a knife but Marco is able to grip Eddie’s wrist and turn the knife on Eddie himself. Eddie’s last words were ”My B.! ” and he dies in Beatrice’s arms. From this ending, I can conclude that in my opinion, Eddie’s death was useless and it was his own fault. Eddie believed himself that he was seeing the truth although we, the audience saw how wrong he was. 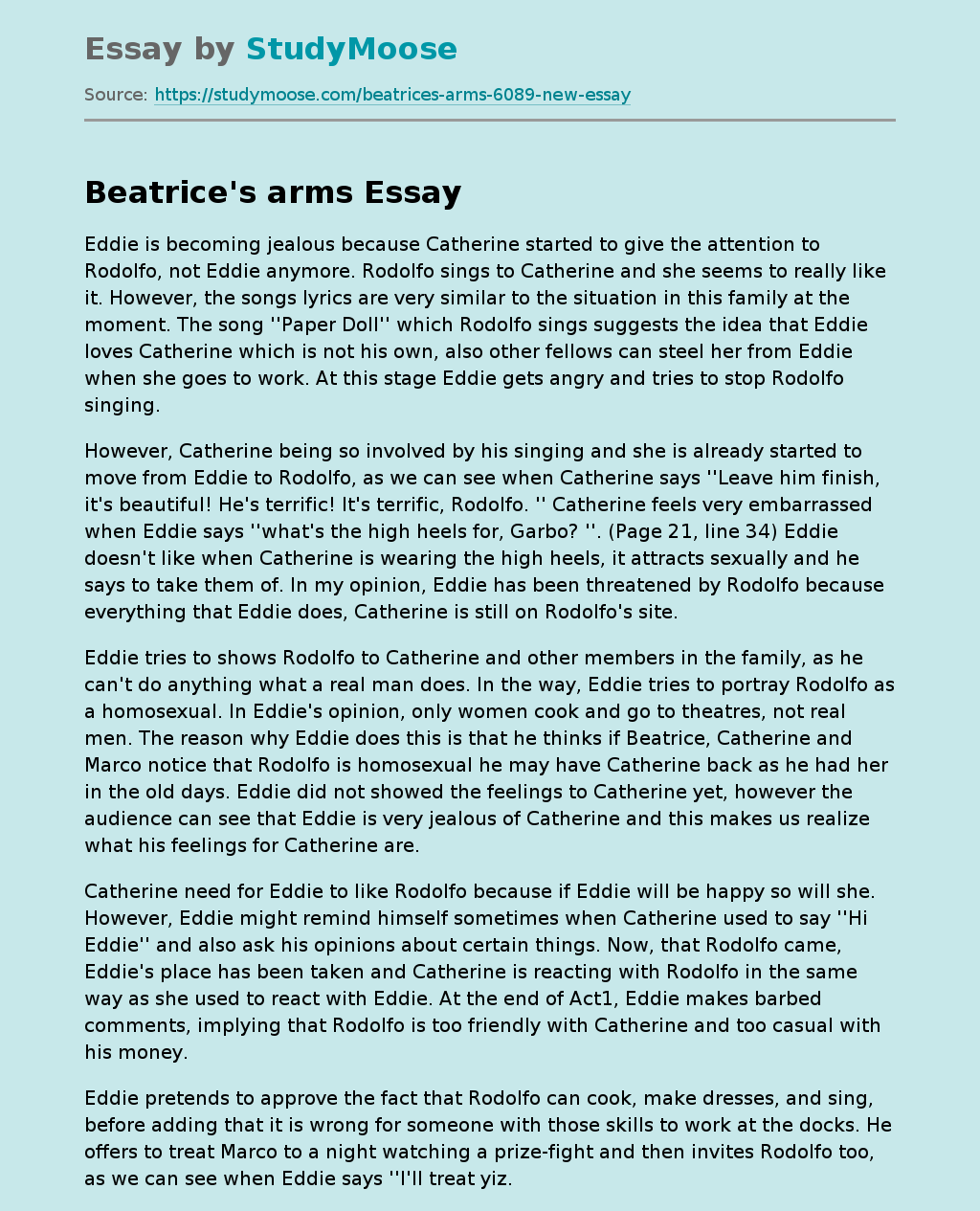