Kenneth Slessor wrote the poem Beach Burial whilst he completed his occupation as the official Australian Correspondent in the Middle East. Due to Slessor’s observations of the war at close quarters he soon learnt about the horrific horrors of war. During Slessor’s stay in El Alamein which is a small village found on the Egypt Mediterranean coast he wrote the poem to describe the realities of war and what realistically happens after heroes are killed. Kenneth Slessor has used imagery and various poetic techniques to establish his purpose to the audience in his poem Beach Burial.

Don't use plagiarized sources. Get your custom essay on
“ Beach Burial By Kenneth Slessor ”
Get custom paper
NEW! smart matching with writer

Slessor has successfully conveyed his purpose to create a high depth of sympathy and pity for the soldiers who have washed up to the shore after being killed in action or died during the voyage at sea.

Slessor has used rhyme in his poem to create an intense emotional reaction to the audience. He has done this by using the rhyme pattern of ABCB.

The use of Slessor’s rhyme creates a sense of flow to the audience. This particular statement works well with the beach scene featured in the poem and the amount of dead men continually sinuously into the beach. The line “the convoys of dead soldiers come” reinstates this idea. Slessor also proposes that war is inevitable and always continue just like the dead men.

Slessor’s purpose of half rhymes also creates a standstill in the poem, the audience stops for a moment to reflect on the realities of war and how dreadful and disrespectful the dead men are treated after they have fought and served for their country.

We also meditate for what has happened to the men and what really happens after death at war. To reinforce Slessor’s purpose he uses the lines “wavers and fades, the purple drips, the breath of the wet season has washed their inscriptions as blue as drowned men’s lips.” This describes the way in which our men are forgotten and no longer required for the war effort. Slessor wants the responder to recognize this fact.

By using a somber tone Slessor has created a sympathetic feeling to arouse the audience. As the poem continues we build up pity causing us to think and even shed a tear. Slessor has used a powerful feel to create strong imagery in our minds. The mood expressed by Slessor has alluded to the memory of the men who have been buried unknowingly who they are and what they have done. The missing identity that Slessor has suggested is located in the quote”unknown seamen- the ghostly pencil wavers and fades, the purple drips.” This illustrates to the audience that men have died in vain and are being forgotten but Slessor is reuniting these circumstances with the audience. His influential language brings out our emotions and he attempts for us to relive the moments and memories of our loved ones who have passed away.

Through the living conditions and stress positioned upon Slessor his experiences have influenced his poetry to create this masterpiece. Slessor has successfully conveyed his purpose of displaying the realities of war and the realistic views on soldiers after they are no longer needed, through poetic techniques like rhyme and the mood and build up of tension and sympathy in his poetry. 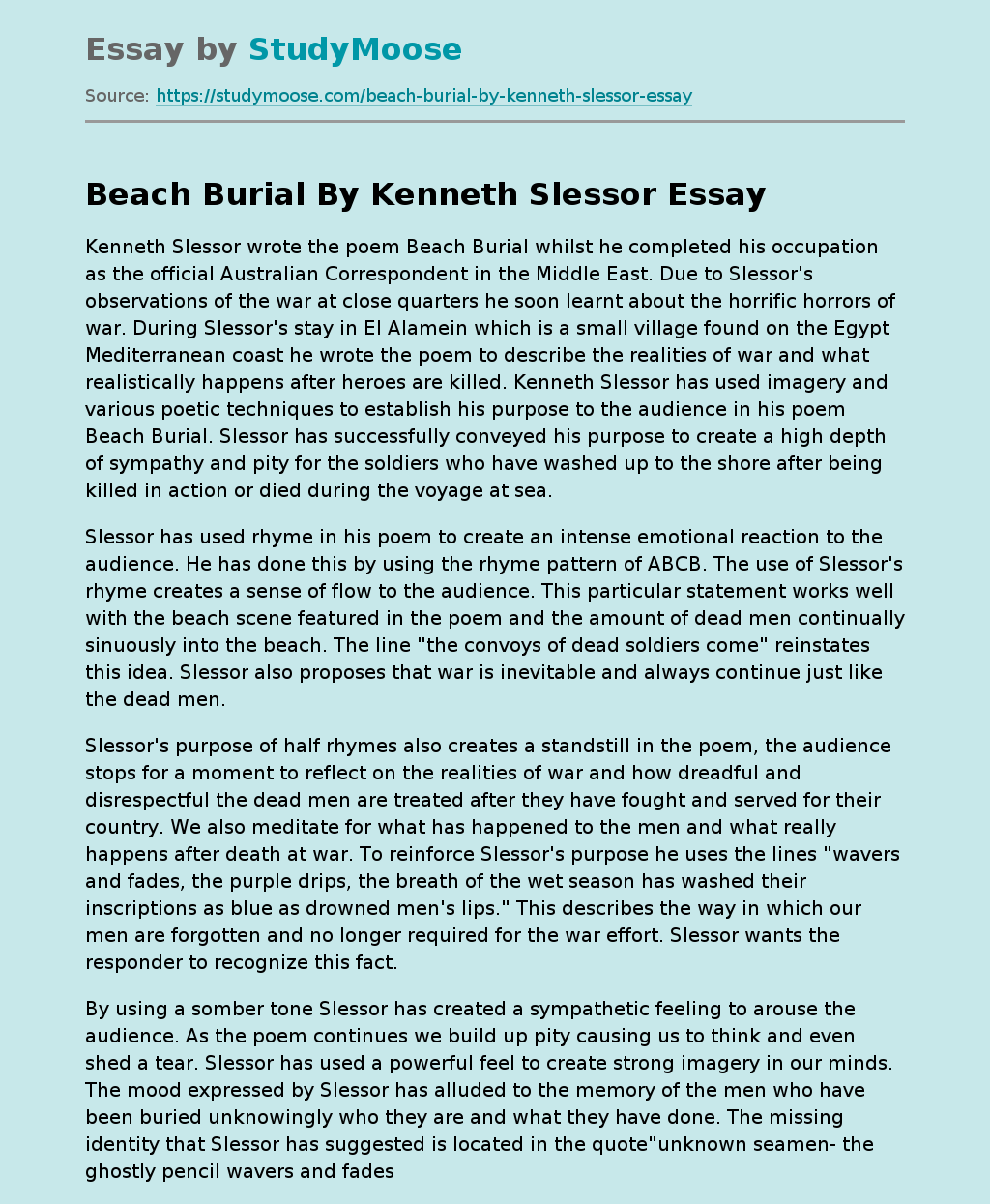