Baz Luhrmann’s film, Romeo and Juliet, is very successful as an appropriation of the original play by Shakespeare. Transforming the pre-16th century play into a contemporary popular culture film was done creatively by keeping the same values and language, but changing the context. This is illustrated by the use of anachronisms. For instance, daggers and swords are replaced by guns as well as cars stand in for horses. The disputes between members of the two families (the Capulets and the Montagues) evoke associations with multi-ethnic gang warfare.

Don't use plagiarized sources. Get your custom essay on
“ Baz Luhrmann’s appropriation “Romeo and Juliet” ”
Get custom paper
NEW! smart matching with writer

Their feud reflects the behaviour of mafia families. Using these modernising elements, he achieves an appeal to the contemporary teenage audience and the changes in the film create a more comprehensible meaning to the audience because people can relate to it better and this is why the film is so engaging.

The film is set in a modern day city where violence occurs regularly. In the opening scene, a television screen is in view and a news reporter is talking.

This immediately allows people to realise the time period which the film is set in. Then there is a sequence of scenes which includes shots of scenery, people fighting, newspaper articles and loud string music is played in the background. There is a lot of editing and cutting in this sequence which makes it move very fast. The next scene is where the Montague gang is at the petrol station. Loud upbeat music is played in the background. The loud music and bright coloured costumes represent the life of this city.

The use of guns and convertible cars contribute to the contemporary atmosphere. The film techniques include using a handheld camera which creates a “realistic” effect.

This is used in the sequence of different shots where there is fire and helicopters and guns. The reason why it is so realistic is because the quality of the shot and the way it is presented make it seem like something that would be seen on the news. But the words that appear between the shots, for example, “In fair Verona” and “a pair of star-cross’d lovers take their life” is taken from the play so it is Shakespearean language. The text is placed with contemporary visual graphics, yet they do not clash together. The effect of this is that people do not take their attention away when they are presented with language that they may not completely understand. Instead, they can connect the text and the sequence together.

Also, the characterisation used in the film is done well to add to the contemporary atmosphere. For example, the Montague gang is not presented as “well-behaved servants”. Instead, they are loud, extrovert, and outrageous. Paris is “bachelor of the year” instead of being a “kinsman of a prince” type figure. No one in the film is presented as a model of a “perfect citizen”. The Capulet gang wears Hawaiian shirts, one even unbuttoned to reveal their bare chest. They have more rebellious styles of hair; pink, shaved and bleached. Luhrmann uses the images of the families to make one appear submissive and docile while the other is unscrupulous and aggressive. The Capulet’s have quite clearly been portrayed as the ‘baddies’ of the story. The reason why Luhrmann have done this is to portray the typical “villain” role, which is given to the Capulet gang. In Shakespeare’s time, homosexual men were not accepted in the society and different ethnic groups did not mix together.

In the film, Mercutio is a homosexual and also black, and in today’s society the different sexuality and race are accepted. Even the master of the household, Mr. Capulet, is not perceived as an archetypal “wealthy and noble” character. The priest is also not a typical Christian and he would have been a controversial character if he was presented during Shakespeare’s time. Also, Baz Luhrmann has chosen two beautiful, “blonde hair and blue eyed” actors to play the part of Romeo and Juliet. This makes their role idealistic. All of the characters in the film are not “refined”, as they would have been in the play. This is a reflection of today’s culture and the audience can relate to the film better. And because of this, the dialogue will not affect the audience too much and they would still be able to follow along with the storyline.

Although the characterisation of the film is quite different from the characterisation of the play, Baz Luhrmann has kept the original values and issues and has presented them well in the film. The issue of “peace and order” is presented with the police captain talking to the Capulets and the Montagues in a conference room. Once again, Luhrmann has used elements of today’s culture in the film to replace the existing culture in the play. The police are used to deal with justice and punishment instead of the prince. The character’s religion is very important in the film and the crucifix is a symbol that is used. Romeo and Juliet get married in the church where they are accompanied by the priest and a chorus. The large statue that reoccurs in many scenes is a religious figure and inside the building, where Juliet lays on her deathbed, is filled with crosses and candles. All of these elements make up a very observable fact that religion is, to a great extent, acknowledged in the film. Luhrmann has made the values and issues raised in the play more distinctive in the film by using these modernized elements.

A change in the context of the play also add to the modern atmosphere. A creative interpretation of the original text is used, when Luhrmann turns the Queen Mab speech, which Romeo gets from Mercutio before they go to the Capulet’s party, into an Ecstasy pill. Furthermore he leaves a few text-passages out by presenting it visually. In a few cases he even changes Shakespeare’s plot. This becomes obvious when Juliet awakes before Romeo has died. This differs from Shakespeare’s original text. With the use of special film-techniques, Luhrmann achieves a dramatisation of the scene. In the scene when Juliet awakes before Romeo has drank the poison, the change of the plotline results to a more astonished reaction from the audience, as they would be expecting the clichéd ending, which is the one in the original play.

Baz Luhrmann’s film is very successful as an appropriation of the original play not only because of his creative ways in modernizing the play, but because the film itself can make one understand the extremeness of the situation in the storyline. That is, in the original play, horses and swords were used in the battles and when people read the play, they may not realise how severe and dangerous the circumstances are because there are too many historical references to swords and horses that it has lost its effectiveness. But in the film, Luhrmann has used fire, guns, cars, and explosions to emphasise the seriousness of the situation. People are more familiar with this sort of violence because it is seen in the media and therefore it will appear more realistic to them. And the sentiment that people may obtain will be more practical and dynamic. This is why the film is so successful, it compels people to understand the original play a lot better. 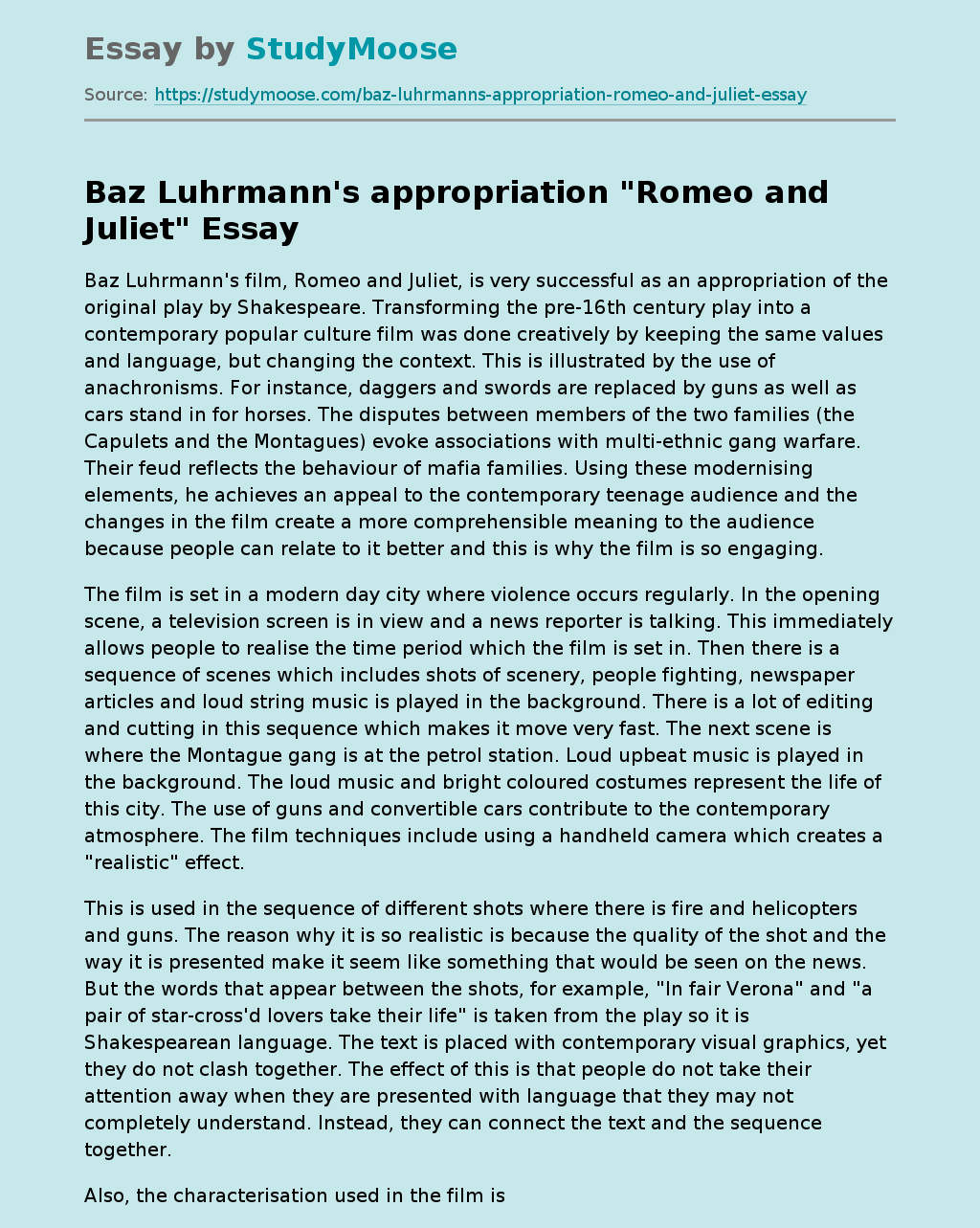