Battle of Lexington and Concord

The first problem between the British and the Americans happened on April 19,1775 in Massachusetts. General Thomas Gage wanted his men to ruin all of the Americans supplies and guns that were placed in Concord. He also wanted John Hancock and Sameul Adams to be arrested. Joseph Waren figured out Gage’s plan. He immediately called for William Dawes and Paul Revere to go to Concord and warn the minutemen to be ready. The two of them split up along the way and took different routes.

Don't use plagiarized sources.
Get Your Custom Essay on Battle of Lexington and Concord Just from $13,9/Page

They each had different plans and followed each and every one of their instructions. Finally they arrived to Concord and warned the minutemen. They were then taken and hidden in a safe hiding spot, while Captain Jonas Parker and 130 other minutemen stood ready to prevent the British soldiers. At approximately 4:30am British soldiers arrived while Parker only had 70 men standing and ready because the rest had gone home to their families. As the 600 men British army approached, Parker ordered “Stand your ground!” “Don’t fire unless fired upon!” “But if they want a war, let it begin here!” When they were asked to leave by Parker the men held their ground.

Then once again Parker ordered the men to disperse, and that they did. Unfourtunatly the British wanted to destroy the supplies so bad that a shot was fired. Then several more shots were fired following the “Shot heard round the world.” Parker and 7 other americans were shot and killed.

Battle of Lexington and Concord. (2016, Dec 24). Retrieved from https://studymoose.com/battle-of-lexington-and-concord-essay 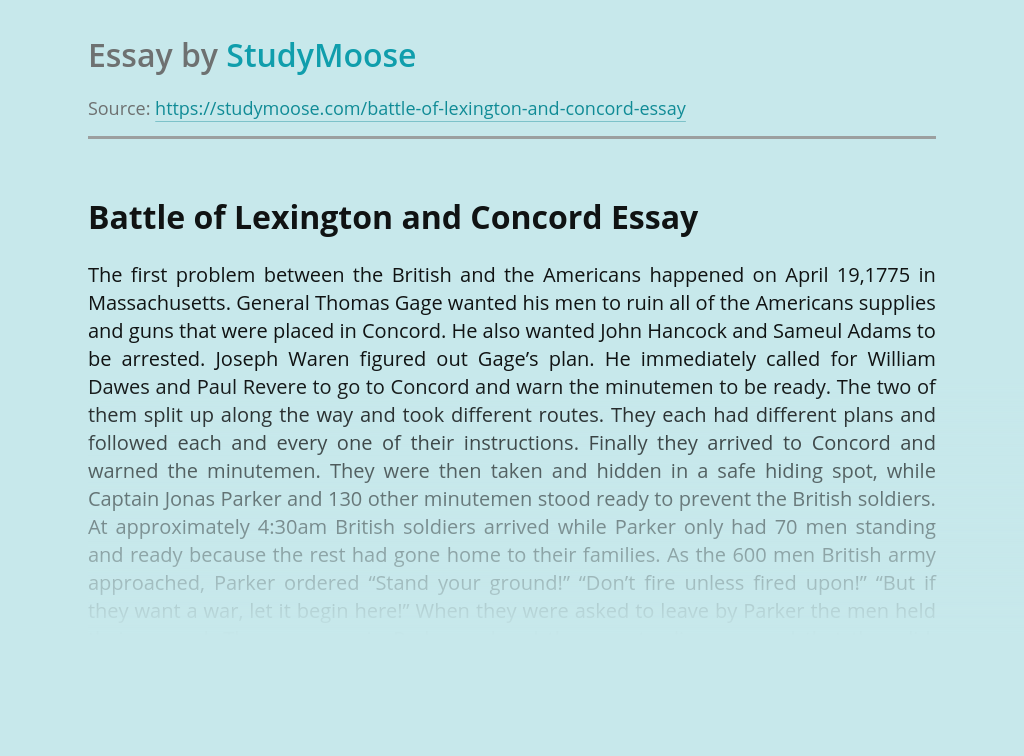 Those were the words spoken with me in the back of my mind. I familiarized after a long time spent in the Army it was very crucial to ensure somebody understood where I was at perpetuity. Not just for accountability functions but the Army is like a family a big household. Where when we deploy...

This case is about British Army adventurous training exercise to Low’s Gully in Borneo, Malaysia. The exercise was intended to build leadership skills and character in 10 volunteer soldiers. The task was to scale down a dangerous and untraversed gully, a 10 mile long chasm that served as drain for rainwater, using abseiling technique and...

Leadership is the highest quality that the military holds dear. Leadership is defined by several dictionaries as the ability to guide and direct. As a future non-commissioned officer (NCO), I feel the most important duty is to do just that — guide and direct soldiers. It is certainly a passion of mine to be able...

The military’s form of law is called the Uniform Code of Military Justice (UCMJ). The UCMJ officially began May 31, 1951. It was signed into existence by President Truman. Congress considered it required to create the UCMJ due to the lack of transparency and fairness previously provides to the military populous during WWII. The UCMJ...