Batman is My Childhood Idol

When I was younger, I often dreamed of becoming Batman. My bedroom was my personal batcave, where the supply of comic books far exceeded the capacity of the bookshelves and formed massive stockpiles on the floor. I would read and re-read each issue, examining each panel rigorously and noticing even the smallest nuances in the illustrations. Batman-themed cupcakes were a staple at my birthday celebrations, as were vivid decorations depicting the caped crusader in epic poses. Each Halloween introduced a new portrayal of the Batsuit, with each subsequent costume becoming more detailed than the last.

Don't use plagiarized sources. Get your custom essay on
“ Batman is My Childhood Idol ”
Get custom paper
NEW! smart matching with writer

I also watched the animated series religiously, spent many sleepless nights completing each of the Arkham games, and collected whatever memorabilia I found in bookstores and flea markets.

However, in my ten-year-old mind this was not enough. The insatiable void could only be filled by being relocated to Gotham City, taken under Batman’s mentorship, and eventually named as his worthy successor. On Career Day in second grade, while classmates had dreams of becoming the nation’s next firefighters and police officers, my hopes were pinned on becoming the next Dark Knight.

I had no idea my dream would eventually become a reality.

As a child, I did not acknowledge Batman’s true symbolism. I viewed him as a powerful character, able to overcome any situation using only his brute power and sharp wit. Only when I watched the Dark Knight Trilogy did the depth behind his character become clear. These films showed Batman as the embodiment of truth and justice protecting a city that didn’t deserve him.

I now understood that I didn’t need to cling to my earlier dream of leaping across rooftops or capturing criminals; only through a personal journey could I discover my definition of justice.

The Batman soon became more than a fictional character to me; he was a moral philosopher, vicariously guiding me toward discovery. The Boy Scouts of America was the first stop on my journey, bringing me to the world of community service. Slowly, my scout uniform replaced my batsuit. Through the Scout philosophy of “doing a good turn daily,” I developed an identity of service and goodwill toward my neighbors. This segued into multiple leadership roles within my troop. As Senior Patrol Leader, I crafted a new vision of the troop’s direction and developed standards of collaboration and brotherhood within patrols. I led patrol leaders in training the less-experienced scouts in the ideals of servant leadership, recognizing that they would bear the responsibility of running the troop after the older scouts left. Witnessing firsthand the long-term effects of community service and servant leadership offered me the first true understanding of justice, but my journey was not yet complete.

As a sophomore I was selected to attend a research seminar that explored the social nature behind political science and economics. One professor gave an inspiring lecture on the duty of politicians, explaining that all public servants pursue justice through service. I now realized that public service could be the next step on my journey. I joined student-government programs such as Kentucky Boys State, Kentucky United Nations Assembly, and Kentucky Youth Assembly. Working as a bill sponsor among similarly passionate students showed me the deep impact our elected officials have on the well-being of our communities and individual citizens. Although a significant commitment of time and effort is necessary, a career in public service would be worth it if I am able to create lasting and effective change for my community. I still hold a deep admiration for Batman’s character, as he solidified my belief of maintaining justice through service. While I now differ from him ideologically on how to accomplish this, I might have never discovered my passion if it weren’t for him. So while the Dark Knight’s utility belt is equipped with all kinds of gadgets to fight crime, mine provides me with the tools of leadership and service.

Batman is My Childhood Idol. (2021, Aug 04). Retrieved from https://studymoose.com/batman-is-my-childhood-idol-essay 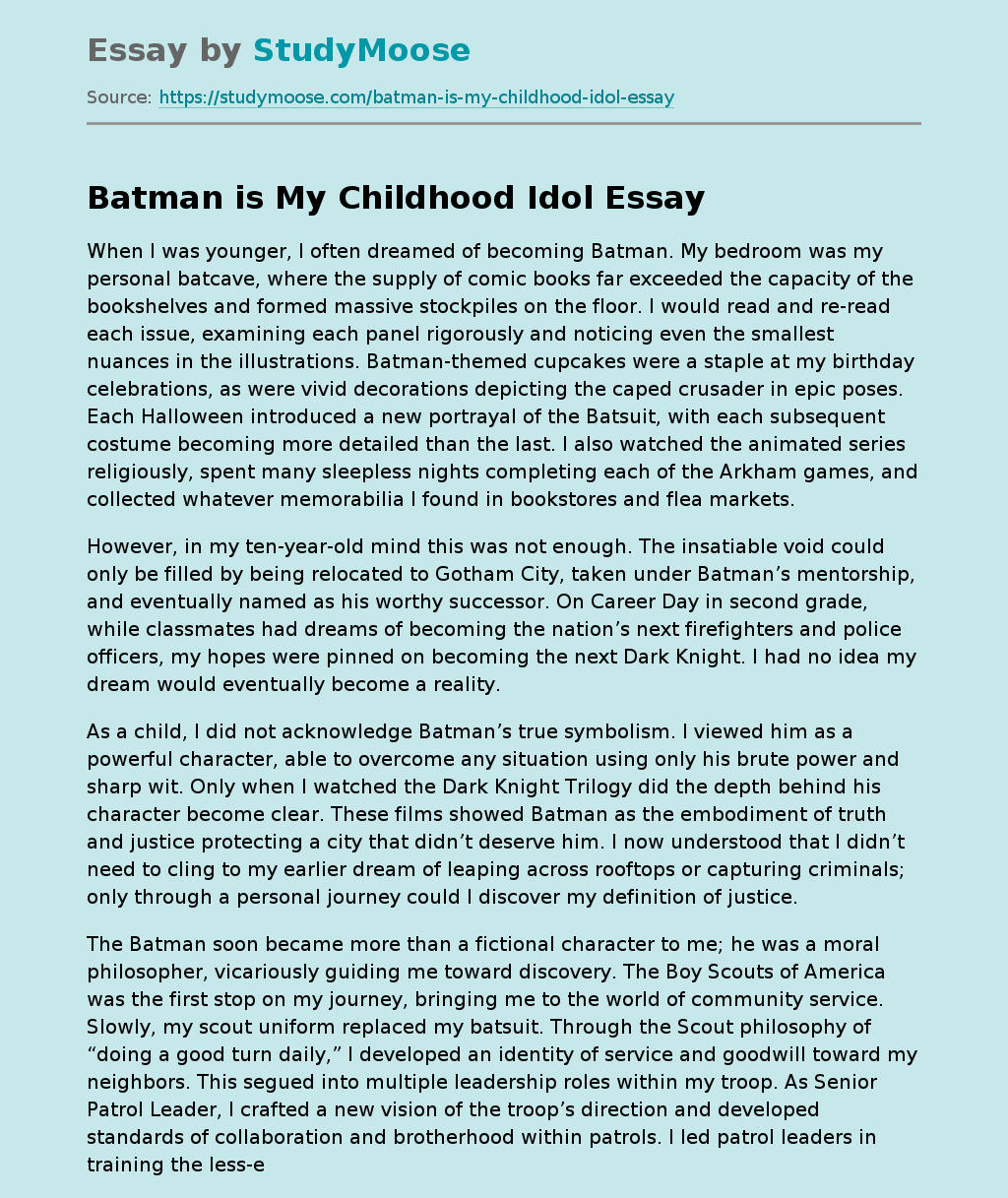