1.Volleyball Game (Set)
A volleyball game or set is played to a predetermined number of points. Games must be won by at least 2 points. For example, if a game is being played to 25 points, if a 24-24 tie occurs, the game isn’t over until a team leads by 2 points.

2.Volleyball Match
Matches are a made up of games. Match play usually consists of competing until one team wins 2 out of 3 or 3 out of 5 games.

3.Playing Fault
A fault is a violation of the rules.

Don't use plagiarized sources. Get your custom essay on
“ Basic Volleyball Terminology for Newbies ”
Get custom paper
NEW! smart matching with writer

The result of a fault is a point. Examples of playing faults are: team hits the ball 4 times without returning it back over the net, a player contacts the ball 2 consecutive times, a player touches the net when blocking or attacking, a player catches and throws the ball.

4.Point
A point is the result of a rally. Points are scored in various ways – by players committing faults, ball landing “in”, ball landing “out”, etc.

5.Volleyball Rally
A rally is the time between the serve and the end of the play.

In some volleyball terminology a rally is synonymous with volley.

6.Volley
A volley is keeping the ball in play and returning it to your opponent without committing any playing faults.

7.Rally Scoring
When a match is played with the rule of sideout scoring, every rally results in a point being scored, either by the team serving or the team receiving.

Now they are the serving team.

Scoring
When a match is played with sideout scoring, a point is only scored by the team that is currently serving.

10.Volleyball Coach
A coach is the person in charge of a team. Coaches make all the big decisions for the team – submitting the line up, calling time-outs, communicating with referees, etc.

12.Overlap
An overlap occurs when players are out of alignment. Players must be in corrent position on the court when the server is contacting the ball to serve.

13.Out of Alignment
A team may be whistled for out of alignment, if they are out of rotation order at the moment of service contact.

14.Screening
Screening is the illegal placement of players in order to prevent the opposition from seeing the ball or server. Screens take place during the serve. Usually a team is warned if there is a possible infraction, but a warning isn’t required. It’s very unusual for a team to be penalized for a screen.

15.Substitution
Depending on the rules of play, players may be substituted in and out of the game.

16.Time-out
A time out is break in action. Most rules allow for a team to call two timeouts per game (or set).

17.Volleyball Hit
Also called an attack, a hit is when you jump and strike the ball with an overhand arm swing.

19.Volleyball Set
A set is when a player tries to place the ball near the net to assist a spiker in killing the ball. Setting a volleyball is a skill that must be practiced with many repetitions.

20.Kill
A kill is a successful hit by an attacker that results in a point for the attacking team. Kills are executed by hitting the ball off a block or down onto the opponents floor.

21.Volleyball Dig
Volleyball terminology for a dig is defined as passing a spiked or hard hit ball. Defensive players are often call diggers.

22.Volleyball Bump Pass
A volleyball bump is done by joining your forearms together to pass a ball. It’s most common to volleyball pass the ball when it’s coming from the other side of the net. However, some passers may decide to play the ball overhead instead of bump passing.

24.Block
A block is a combination of one, two or three players jumping up with the hands and arms reaching up above the net in front of the opposing spiker. The purpose of the block is to prevent the opponents from hitting the ball into your court. 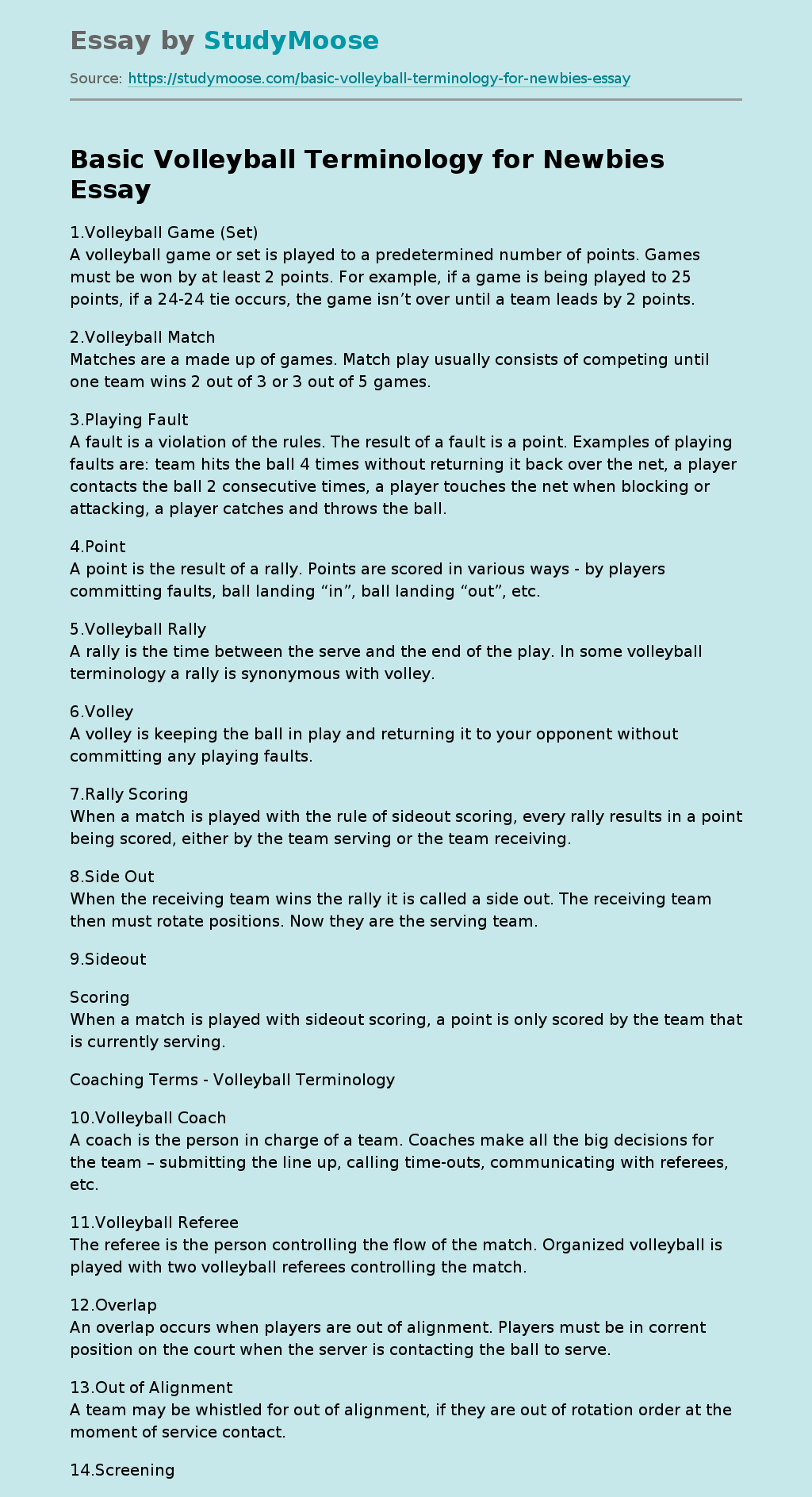