There were 2 main leaders of the Barbados Revolt of 1816, they were Bussa who was a free man in Africa and was brought to the Caribbean in the transatlantic slave trade which was indeed traumatizing. the other leader was Nanny Grigg. Causes

The causes of the 1816 revolt in Barbados are:

The British Slave Trade was abolished in 1807 and the slaves mistook it for emancipation. There was a registry or registration bill or also called the registration of slaves {1812-1815} in which planters or owners had to register their slaves, this was passed so as to stop excessive punishment as well as the illegal sale of slaves.

Don't use plagiarized sources.
Get Your Custom Essay on Barbados Revolt 1816 Just from $13,9/Page

The planters were infuriated over the passing of this bill and saw it as interference in their domestic affairs. The slaves misinterpreted this as being angry about a plan for their emancipation.

Some slaves who were literate such as Nanny Grigg, had access to local and English newspapers from which they learnt about what was happening in England Haiti and elsewhere.

An able leader emerged among the slave that is Bussa, an African born slave.

This revolt was mainly fueled by the planters’ refusal to accept the Slave Registration Bill, the fact that the slaves felt their Emancipation was being withheld from them and the ideas of freedom and equality being cultivated in the minds of the slaves’ mind by non-conformists Missionaries.

The slaves believed emancipation had been granted, mistaking it for the Registration Bill (which stated that all slaves had to be accounted for, so no smuggling went on) and revolted.

Slaves in Barbados enjoyed some measure of freedom; this measure of freedom helped them to organize the revolt. Effects/Results
The missionaries were kicked out of Barbados – This help to turn the British public opinion against the planters and made people in Britain more favorable to emancipation – Humanitarians were encourage increasing their activity to bring down slavery

Bussa, (also recorded as Bussa, or Busso or Bussoe) was born in Africa but captured and brought to Barbados to work as a slave on Bayleys Plantation in the southern parish of St Philip. (Today, the plantation’s ‘Great House’ is still standing and become the residence and recording studio of international musician Eddy Grant) His birth date remains unknown, however it is thought that he arrived in Barbados as an adult.

On the plantation Bussa worked as a domestic slave, a head-ranger at Bayleys and did not experience the intense hardships that the field slaves endured. Domestic slaves generally considered themselves above the field slaves and some even exposed plans of slave rebellions to their ‘masters’ in order to gain favour. Bussa however, despite his ‘privileged’ position, helped to plan for months in advance.

The slaves rebellions were born out of a strong desire to overthrow the oppressive white plantocracy and claim their freedom. It is said that plans for the rebellion began after the House of Assembly’s rejection of the Imperial Registry Bill in November 1815.

The white plantation owners were totally caught off guard. The slaves fought valiantly against the troops of the First West India regiment and it was reported The rebellion spread from plantation to plantation until about half of the island was caught up in the insurrection. It took four days for the authorities to regain control. Bussa was killed in battle, and the ringleaders were executed.

Although the rebellion ultimately failed, it was never forgotten. In 1985 more than a century later, the Emancipation Statue was erected at the roundabout in Haggatt Hall, St Michael. In 1999, Bussa was named as one of the national heroes of Barbados. and there is also a national holiday ‘Emancipation Day’, which celebrates the emancipation of the slaves. 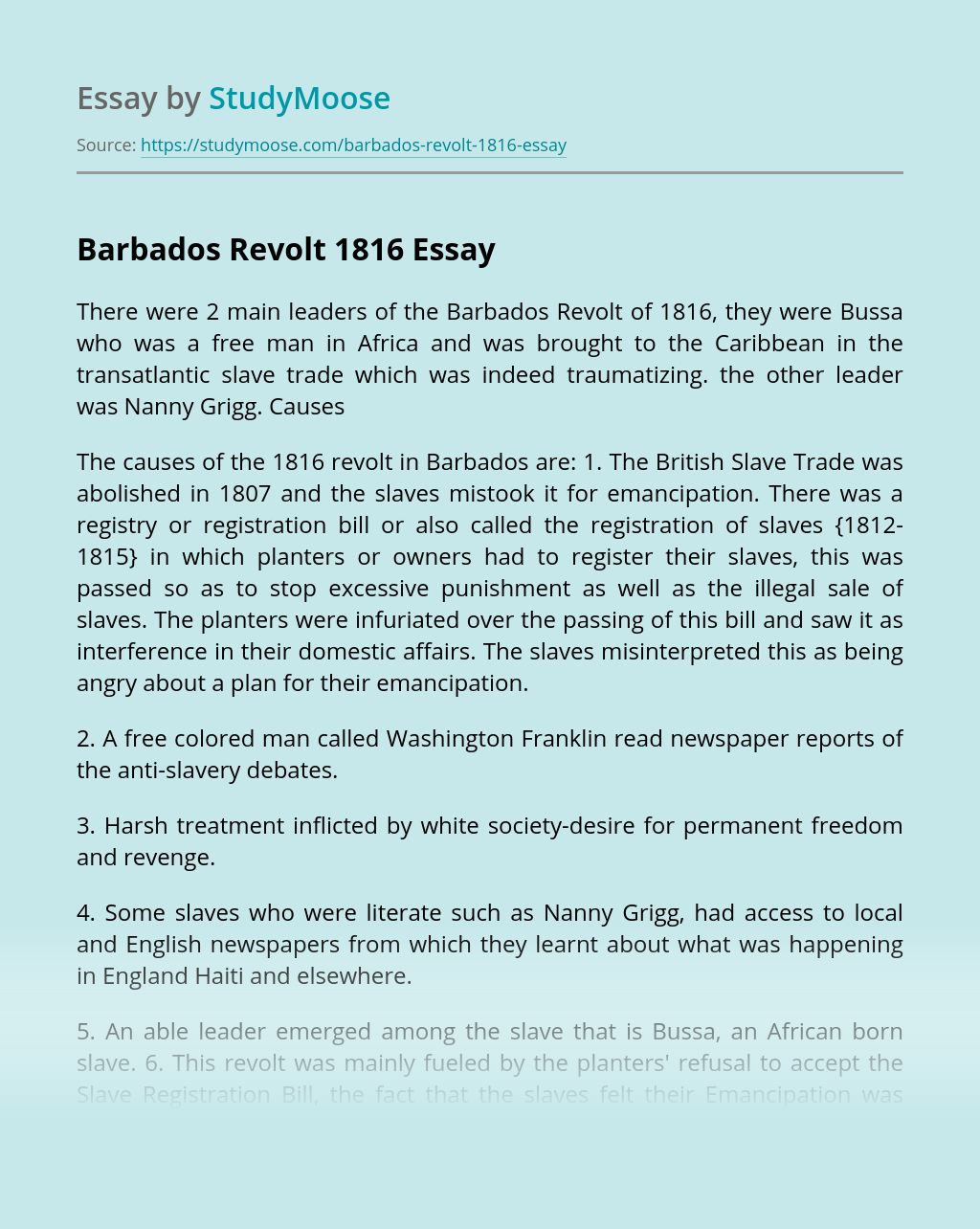 How does Clint Eastwood, director of the film, Invictus, use the South African rugby team (the Springboks) as a vehicle to bring a troubled nation together?

Many ancient scholars believed Africa had no history prior to colonialism because there was no documented evidence. Professor A.P. Newton, who was a distinguished British historian in the early 20th century, believed that there was no African history because most of the African society was illiterate before the European intrusion. ‘History’, he said, ‘only begins...

Get Essay
European Colonization During The Scramble for Africa

African American literature is captivating, powerful, spiritual, and emotional. The recurring theme is slavery but there are others such as inequality among sexes and races, injustice, resentment, and the strong belief in religion. These pieces of literature have been told by the individuals who went through the experience of slavery such as Frederick Douglass and...

Effects of Europe's Colonization of Africa

Imperialism is the political, economic, and social control by one country over another country. In the 1800’s, many European countries began their imperialism of most of Africa. But when the Europeans were finally forced out, the government, economy, and social life were in ruins because a lack of concern by the Europeans, and their hasty...