1. The main aims of the Bantu Education Act were mainly (at least according to Dr. Verwoerd) to transform education for natives into Bantu education, which will teach them things they will need to know in their lives. This is stated clearly in Source A, where Dr. Verwoerd is quoted saying “Education must train and teach people in accordance with their opportunities in life, according to the sphere in which they live.” Reading between the lines, Dr. Verwoerd is saying that the Bantu are an inferior race that will never be equal to the whites, and that it would be a waste of resources and effort to try and teach them things they will never need to know.

Don't use plagiarized sources. Get your custom essay on
“ Bantu education and source analysis ”
Get custom paper
NEW! smart matching with writer

By saying the he almost directly suggests that the blacks should be kept down, as it would be absolutely ridiculous to try and teach him mathematics, for example, when all he will ever amount to is a farmer or a tailor.

In Source C it is directly stated that, as most blacks will become agriculturists, the most useful things that can be taught to them are gardening and needlework.

He doesn’t even give the blacks a chance, immediately dismissing them as complete idiots whom wouldn’t even want the same type of education as the whites. Therefore, when planning the different syllabuses for all education, the black systems should be limited to very simple skills such as reading, writing, farming and perhaps very simple mathematics. We wouldn’t want to overload the blacks with information that will only confuse them and make them unhappy, now would we? According to the Commission on Native Education the blacks; knowledge of anything requiring intelligence should be barred.

In another speech by Dr. Verwoerd (Source B) he states that “The Bantu must be guided to serve his own community in all respects” and: “Until now he has been subjected to a school system which drew him away from his own community and misled him by showing him the green pastures of European society in which he was not allowed to graze”. Basically, these two quotes state that Verwoerd doesn’t want any wannabe Europeans around. He defends his arguments by saying that it would also be unfair to continue educating the Bantu like the Europeans, as it is only showing them new horizons they will never be allowed to explore.

Educating them like this would therefore create Bantu that had the skills of Europeans, and not their people. As whites into would never hire them the administrative positions their education levels demand, they would be forced to go back to their people and farming, in which they would have no skills. This would cause discontent in everyone, so it is better not to educate the Bantu at all. Apparently it would also be very uneconomic to spend money on education without a specific aim, and disrupt the community life of the Bantu. His main point behind the arguments states this: We don’t want to have the blacks interfering in our lives.

Source E further supports these arguments. In this photo four black schoolboys are looking very happy walking down a road. This photograph seems very arranged to make the outside world think the South African government is doing all they can to bring light into the darkness that is the life of the Bantu.

2. Assessment of source B

Source B is an excerpt from a speech made by Dr Verwoerd to the senate of South Africa on the 7th of June 1954. I think this source is very valuable, as it is a primary source from the time period. It gives us direct information about what Verwoerd said in his speech. It also tells us a bit about what kind of government was in power at the time. This can be seen from the fact that he can give such a racist speech. If someone gave this speech today, he would be severely criticized and ridiculed. At the time the speech was given it would appear that the senate would be expecting to hear something like this, and be satisfied by it. This again proves what a racist government was in power at the time of the speech. It does not leave much room for bias, except by censorship, or having some parts of the speech left out.

This source is also very limited in many ways. It doesn’t tell us many things, as it is only a part of a speech. For instance, it doesn’t tell us who recorded this speech, and chose the parts to be included. We don’t know either what Verwoerd said in the parts that are not included. It would also give a clearer image of the government in power if we were told about the senate’s reaction to the speech. If they cheered madly, this would prove what a racist system was in power at the time. A tremendous help would be if we found out what happened after the speech. Were all his suggestions made reality, or were they regarded as a failed idea. I would also be very interested in finding out what inspired him to give this speech. Was he requested to give a speech on the topic, or did he himself think the time was appropriate for such an exclamation.

This source is a photograph of four black schoolboys stating how happy they are, and what a good job the government are doing at getting all the Bantu into school. This photo is very valuable specifically because it is so obviously staged. This is a good example of a heavily manipulated propaganda photo. It is meant to give us the idea that all is well with blacks, and they are the happiest of all. If you dig deeper, though, you can deduce many things. Obviously the photographer has told the children where to stand and to apply a huge smile to their faces. This tells us that the South African government was concerned about their image with the outside world and human rights activists. This photo was obviously taken to soothe the minds of anyone worrying about the ill treatment of the blacks.

3. In my opinion, Source B is absolutely the most useful. It really captures the mentality of the current government and the people. It tells us Dr. Verwoerd’s opnion about the blacks and their treatment. Although he doesn’t directly announce his hatred for blacks and how he wants to shoot them all, we can see he is more concerned with the wellbeing of the European community than that of the Bantu. It is also a primary source, so chances are it has not been subject to too much manipulation. It gives us a good understanding of the government, Dr Verwoerd and how the blacks are being treated. It is a bit sugarcoated, but once you delve deeper it is obvious what they really think. I think this source is the most useful because it captures the attitudes towards the Bantu at the time. 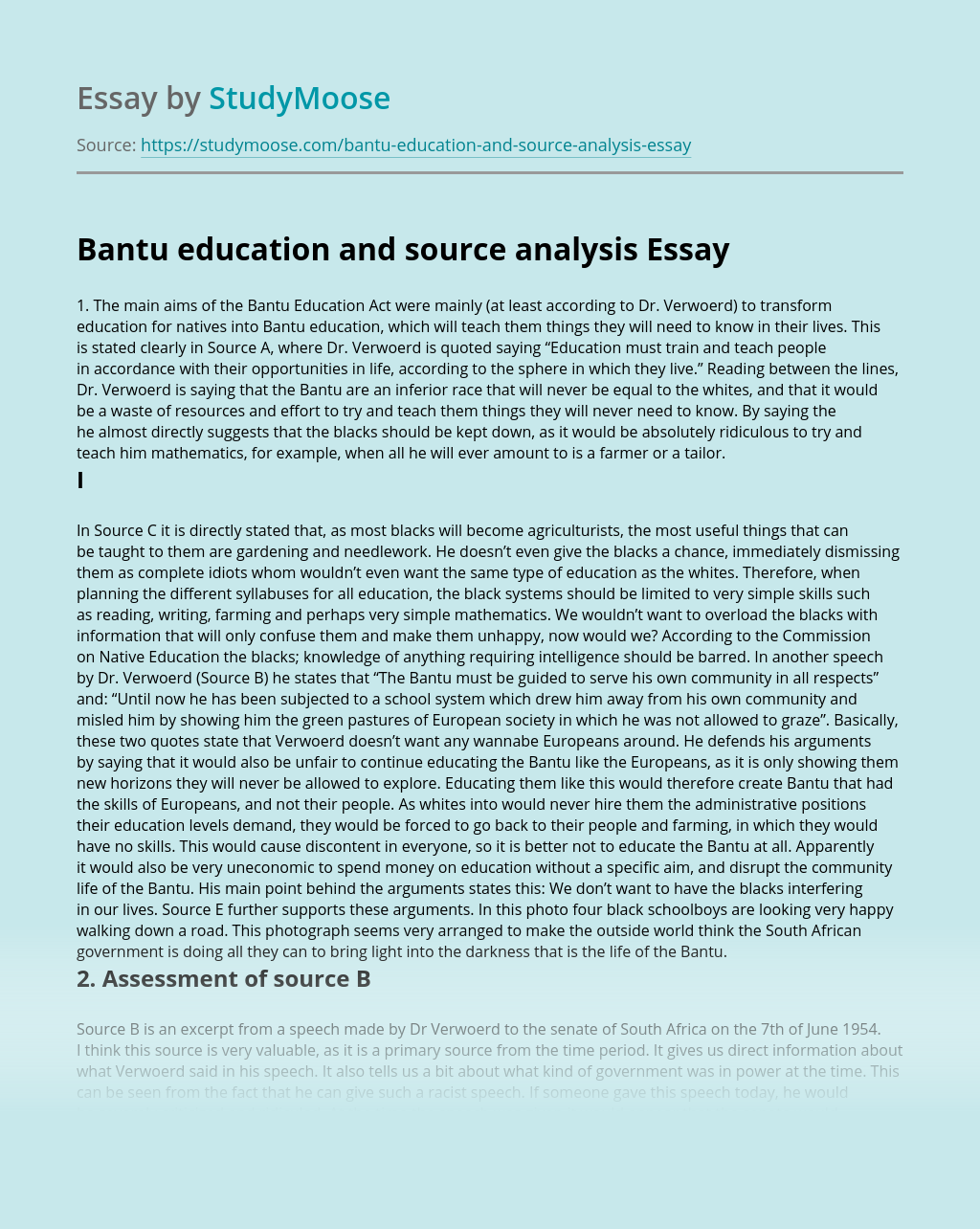