Bankruptcy becoming the issues toward many youth nowadays. The worst is the bankruptcy was involves with many youth where below than age 30. According to Credit Counselling and Management Agency in New Straits Times (2011), an average of 41 Malaysians are declared bankrupt daily, with the majority failing to make repayment for car purchase loan. In short, the problem of bankruptcy among youth has to be taken seriously.

Statistics by the AKPK indicated that the number of individual bankruptcy cases had raised by 11.

Turn in your highest-quality paper
Get a qualified writer to help you with
“ Bankruptcy Among Youth ”
Get high-quality paper
NEW! AI matching with writer

2% to 18,053 cases in 2010 and increased by a further 6.2% to 19,167 cases in 2011 (Curbing Credit Card Abuse, 2012). According to a survey by the Education and Research Association for Consumers, the number of Malaysians in financial distress appears to have increased, as evidenced in the jump in the number of bankruptcy filings from 13,855 in 2008 to 19,167 last year (NewStraitsTimes, 2012). Therefore, this research will investigate further about what are the factors that lead many youth to being sentences bankruptcy.

2.1.1What are the relationship between unemployment with bankruptcy among youth? 2.

4.0The Scope Of Study

This research will analyzes the problem and investigate the factor that contribute to bankruptcy among youth.

the researcher will selects the respondents among the students of UiTM Arau that have different attitude toward bankruptcy issues by distributing questionnaire and gather the information by using several related resources.

5.0Significant of The Study

5.1 To the researcher: The researcher will get experience on how to deal with the real situation as they will have to develop questionnaires and distribute it to the respondent as well as further understanding on factors that contribute to the bankruptcy.

5.2 To UiTM Perlis: It can be use to increase awareness on bankruptcy among students, lecturers and stuffs of UiTM Perlis.

5.3 To the faculty: With this study, the collection of project paper can be added in the faculty as it is useful for future reference as well as help other students to gather information and make refer to findings from past research. 6.0Literature Review

Bankruptcy can be define as someone who has officially declared that he cannot pay what he owes. In Malaysia, the minimum amount of outstanding debt amount to initiate bankruptcy is RM30 000 (Insolvency Department of Malaysia, 2012). Once declared bankrupt, life would very tough because their name would be blacklisted in the Central Credit Reference Information System (The Star, 2010).

An arrangement in which a lender gives money or property to a borrower, and the borrower agrees to return the property or repay the money, usually along with interest, at some future point in time. Usually, there is a predetermined time for repaying a loan, and generally the lender has to bear the risk that the borrower may not repay a loan.

An economic condition marked by the fact that individuals actively seeking jobs remain unhired. Unemployment is expressed as a percentage of the total available work force. The level of unemployment varies with economic conditions and other circumstances (Lerner, 1991).

Medical expenses refer to any expenses incurred by individuals due to health care costs and it usually involved high cost. For example cost for medicines, treatment, surgery, premium for health insurance and other related costs.

According to Haini Hassan Deputy Director-General Insolvency Department (2012) from the statistic make by the Bank Negara the car loans is the top list of the reason bakruptcy followed by personal and housing loans. In addition, she added that the credit card debts made up the other major causes of bakruptcy. Similary, Bank Negara Malaysia (2009) cited in Malay Mail Insight stated that 3548 people declaring banruptcy due to the credit card debt whereby 1780 people belong to those aged 30 and below.

A survey conducted by Deborah Ralston, Rosalind Mason, & Jaynendra Kumar(2001), the major self-attributed causes of consumer bankruptcy in 1998-99 were unemployment and it cause 38% of consumer bankruptcy in 1998-1999 which is major self attributed. Similarly, J. Zywicki (2004) found that the first, high levels of household indebtedness, including the influences of credit cards and home mortgages followed by unemployment and downsizing in the second place.

According survey conducted by Bianco and Bosco (2012), reported that college students are financially illiterate and not aware about skill to make sound financial decision. Moreover, Seyedian and Yi (2011, based on survey result in which participants correctly answered 53% of questions on personal finance, which they was claim that college students are not knowledgeable about personal finance and they may not make sound financial decisions.

Based on survey conducted by Brotman (2006) survey responses indicated that between 46.2 and 54.5 percent of the individuals interviewed from 931 respondent cited medical expenses as contributing to their financial problems also 75.7 percent of medical bankcruptcy filers had health insurance coverage when their illness or injury began. In addition, among families with medical expenses, hospital bills were the biggest medical expense for 42.5 percent, prescription medications for 21 percent and doctor’s bills for 20 percent (Himmelstein, Warren and Deborah,2005). 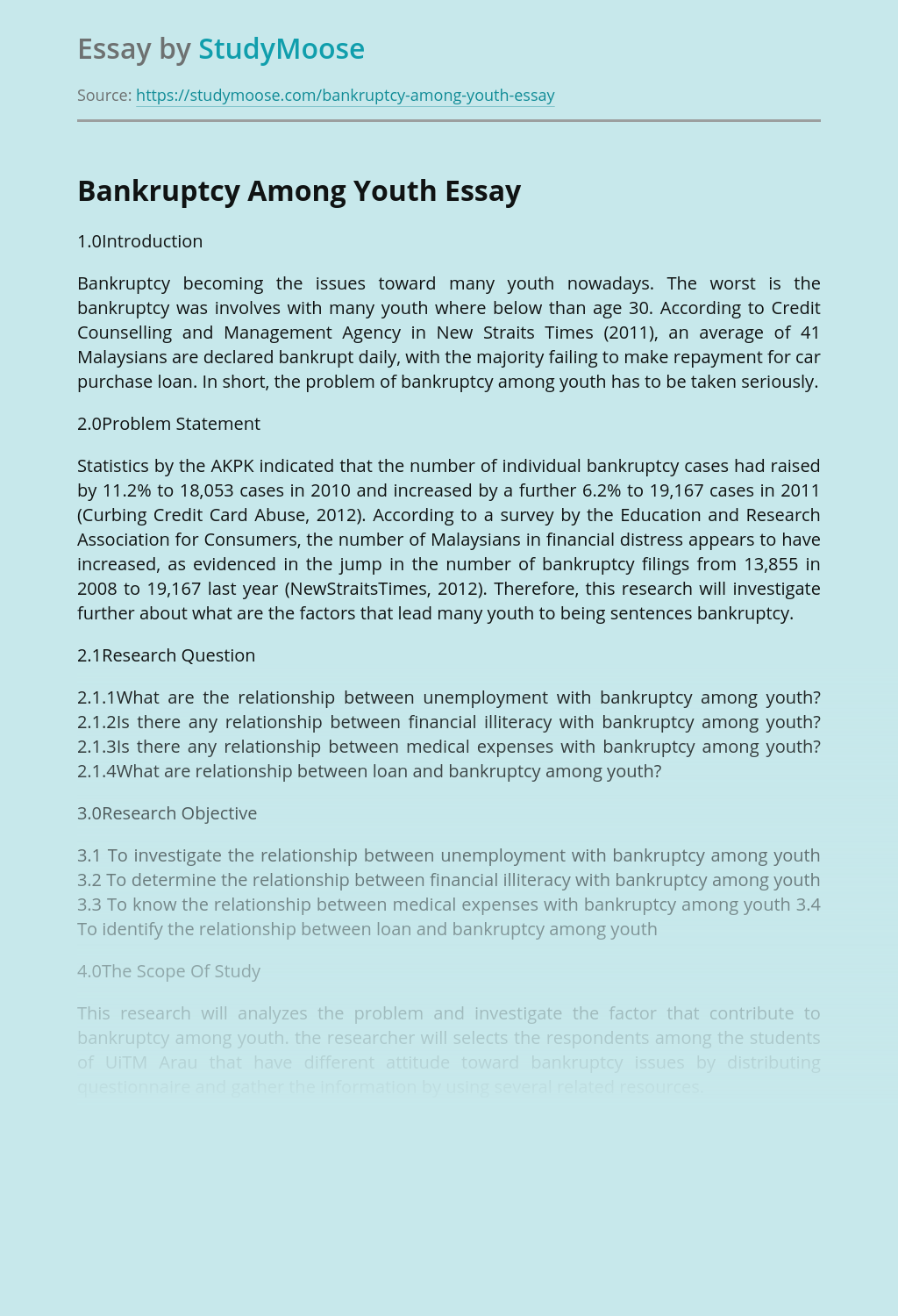 Turn in your highest-quality paper
Get a qualified writer to help you with
“ Bankruptcy Among Youth ”
Get high-quality paper
Helping students since 2015
Stay Safe, Stay Original