Bank of America was operating in 29 states, District of Colombia and 43 foreign countries, serving individual customers, small to middle market businesses and large corporations. They provided a diversified range of financial assistances, such as banking, investing and asset management. All this through three business segments: Global Consumer and Small Business Banking, Global wealth and Global Corporate and Investment Banking.

The headquarters of Bank of America is located in Charlotte, North Carolina.

One of the banks business strategies is to serve as a leading financial partner and advisor across all major sports. Owners, leagues and franchises can turn to them with all banking needs. The bank spent more on sponsoring sports then any other bank in the US based bank. Sports such as major and minor baseball, the PGA-tour, NASCAR and NFL.

Bank of America actually grew from many smaller banks, as regional banks where acquired the bank got sport relationships along with the smaller banks; which were kept to show their commitment to serving its customers and communities.

Since 1880 Baseball was generally considered a part of America’s heritage and also a part of Bank of America’s culture that sponsored their employee baseball teams. And in 2004 the bank became the first company ever to be designated the Official Bank of Baseball.

In 2006 Ray Bednar joined the Bank of America as senior VP and global sponsorships executive, he was there to oversee the strategy and activation deployment for the company’s expansive sport sponsorships portfolio. His largest responsibility lied with the application of more difficult and explicit business criteria, beyond his employment to the traditional marketing/promotional considerations and making sponsorships decisions.

We are a Bank. If we sponsor, we expect banking relationships. We are concerned about getting banking business instead of just generating brand awareness and brand association, or generating more retail traffic. Sponsorships for Bank of America is ultimately a banking business decision- a decision to help our line of business.

With a broad reach as 1800 racing events and more than 110 tracks in 36 states it is ranked number one corporate involvement and per-event attendance, and number two in television viewership. Given Bank of America’s long involvement with NASCAR, they could continue to expand their association with the sport and benefit and build excitement for fans across the country. But is this an appropriate and effective platform for targeting multiple customer segments.

The banks involvement with the Olympic team gores back to 1921. But in 1992 another bank, Bank America became the Official Bank Sponsor of the U.S Olympic team. What Bank of America now faced was whether the USOC and the Olympic Games remained a good strategic fit with the bank? Should the bank renew its sponsorship beyond its 2008 commitment? Would global reach associate well with the banks philosophy and selection criteria?

Bank of America had been involved in the financing of the Dallas Cowboys. Bednar faced the decision of whether or not to renew the sponsorship with the NFL-team, how had to consider on how the return on investment on objectives approaches could be applied.

Two of their major sponsorships in golf were the Bank of America Championship in the Boston area and the Bank of America Colonial in Fort Worth, Texas. They recognized the risk of losing the relationships with club members, but not as enough to justify the continued investment. How could the implement this exit strategy and still maintain existing banking relationships

The name of the company clearly states who the costumers should be. My recommendations would be to focus on the sponsorships within the America. NASCAR, NFL and Baseball are great opportunities to create relationships with their costumers. They might even try to become the Official bank of NFL one day. With that said I think the bank should try and sponsor less of the global sporting events such as the Olympic committee. The PGA tour, while it is played in the US it is televised in the whole world and since they are not reaching towards that market, I think less sponsorship should be put in this event as well. As for the Chicago marathon they should sell the event but stay as sponsor.

If Bank of America would like to go global, would they have to change their name to something less patriotic?

Bank of America Case Study. (2016, May 06). Retrieved from http://studymoose.com/bank-of-america-case-study-essay 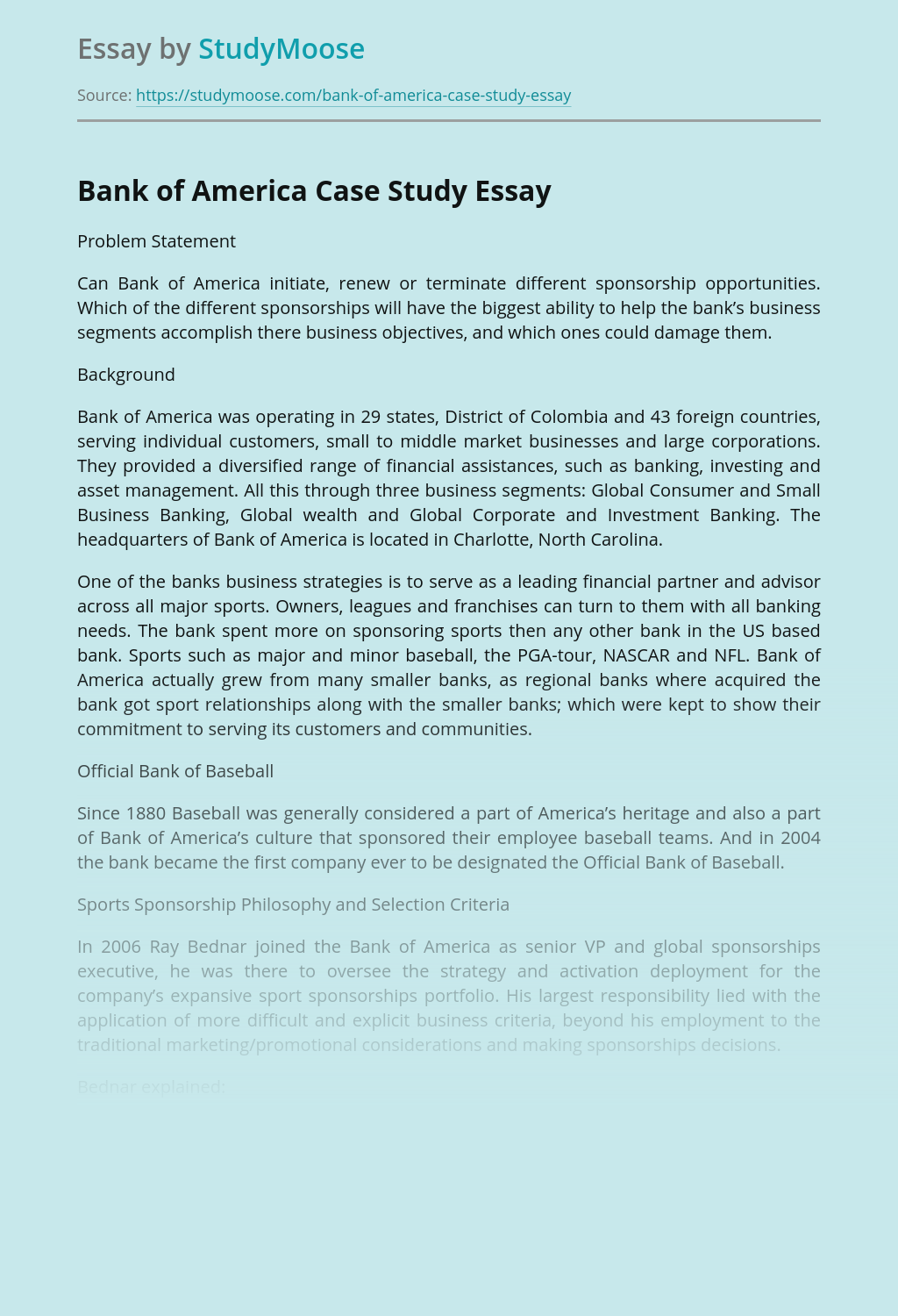