Bangladesh Philosophy: The Relationship Between Body and Mind

Philosophy is a view which distinguish the life and character of Bengali. In Middle Ages religion has a great impact on Bengali which use higher-self to resolve the problem.  Gauda Purnanda is considered a highly spiritual person among Bengali. In his book Tattvamuktavali- Mayavad- Shatadusani is a great source for spirituality where materialistic thinking is reflected.

A thousand years back to era Buddhist philosopher named Shantadev has been well known for his philosophical books. The Buddhist viharas were used for practice as a learning center.

Don't use plagiarized sources. Get your custom essay on
“ Bangladesh Philosophy: The Relationship Between Body and Mind ”
Get custom paper
NEW! smart matching with writer

Most of the philosophical books from that time have been extinct. Some of them are found in Tibet, China, and Central Asia. The well-known Shanta Rakshit was the logician and popular in Buddhism school at Vajrayana. He is famous for his three Buddhist philosophical books. Some of his Sanskrit writings and other great teachers of that time named Atish Dipankar Srijan and Nalanda’s Pandit has been reserved. The prominent book Charyapada still upholds as a shred of evidence for Philosophy of culture.

The devotional verses which contain mystical thoughts are used as deeper spiritual meaning songs by Vaishnava, aul baul, marfati, Shakta padavali and mmurshidi. The body and mind enrichment were the only cravings for them. The most spiritualistic rituals of devotion are mentioned in the Charyapada for the intellectual and metaphysical manifestations.

The Hindu philosopher Sridhar Bhatta is famous for his creation of gaudapada’s spiritual thoughts and philosophical concepts. In Early century the Hindu theory and philosophy of law were studied by people.

The temporal and spirituality are given importance by Vaisnava philosophy. Early Hindu society was divided into social classes and sects. Jaydev was the only one who spoke regarding this issue and inspired the literature Vaishnava philosophy. Bengalis are encouraged by Philosopher Chandidas to bring love and devotion as his messages of wisdom, devotion, and humanism which lead them with peace of mind. Another philosopher Vaishnavism who believes in knowledge, work, and love as a part of human existence. There is no need to please the higher-self because God is self-contained and no wants. Vaishnava philosophy followers need to follow this supreme bliss of tranquility, God’s servant, affection, joy, and prayer are the five blissful traits of mind to get real experience of freedom and union with God. Vaishnava philosophy is started with the body as gradually enlighten with divine love and deepen meaning of life to touch the deep within soul and mind.

In middle age, Muslim philosophy comes to light to break the social barrier and brings equality among Bengali as a revolutionary change in society. In the 13th-century Bangla literature and Sufi’s work as well as metaphysical matters, social and moral issues are studied by these Muslim scholars during Muslim rules in Bangla. The great scholars like Haji Mohammad, Syed sultanate, Sheik Faiz Ullah, Sheikh Chand of the 17th century, and Ali Raza prominent in metaphysics. In their books, they mentioned Islamic mysticism with Yoga exercises and make clarity occult idea with philosophical monism, the fana of Sufism, and the nirvana of Buddhism. The truth of the Creator and His creation, the life of the hereafter, and the judgment day, etc were given the rational answer. This liberal Muslim Sufis are generated new thoughts in Bengalies and social works through believed in Allah is the creator of all creation and so there no need to have boundaries and follow the equality in human beings as a brotherhood.

Bangladesh Philosophy: The Relationship Between Body and Mind. (2020, Sep 13). Retrieved from https://studymoose.com/bangladesh-philosophy-the-relationship-between-body-and-mind-essay 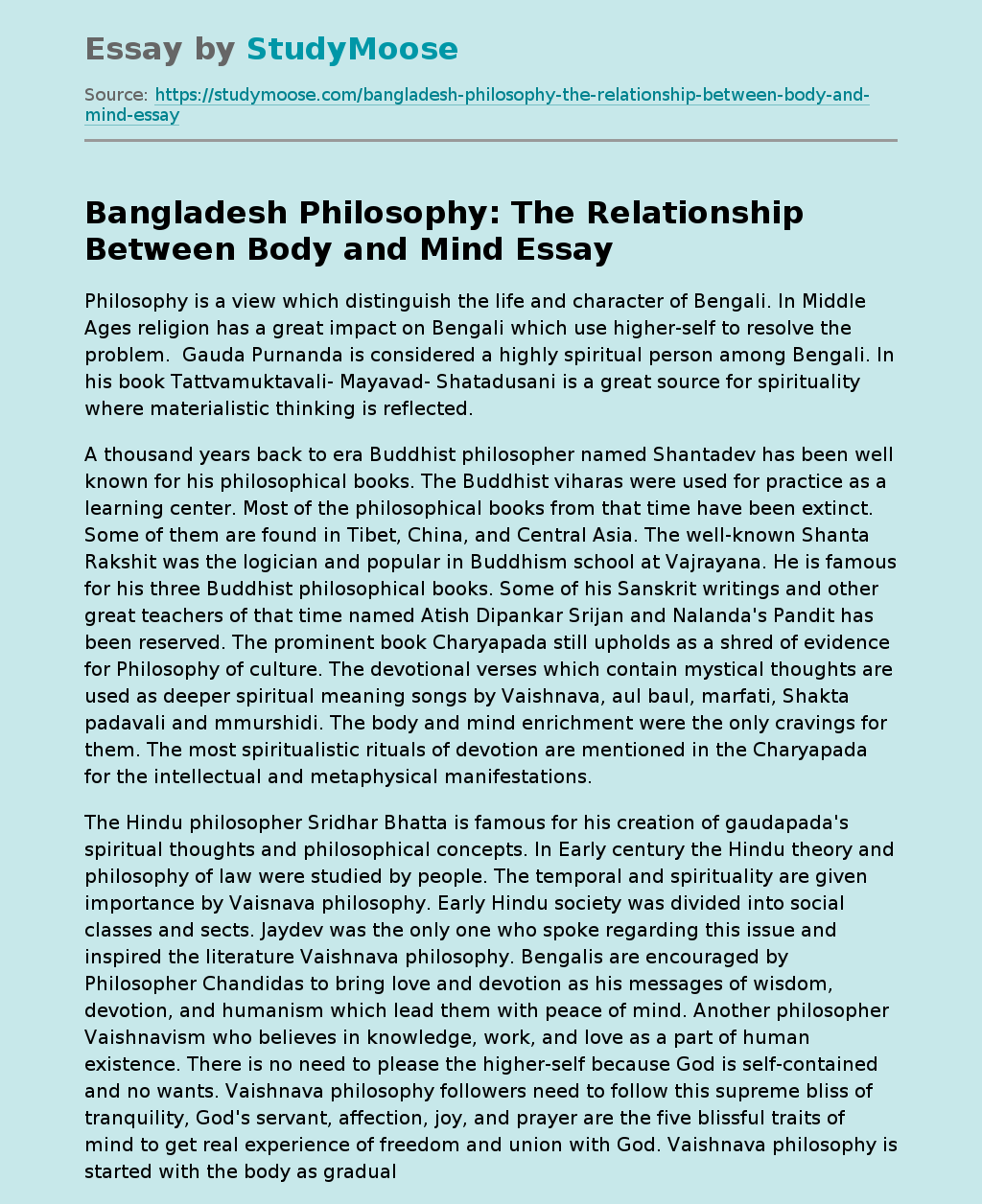