Flooding is one of the main facts of Bangladesh. It is a country located in South Asia bounded by India in the north; Bay of Bengal in East and West while Myanmar surrounds it in the South. The country has practiced several flooding throughout the years. Between July – September 1998 Bangladesh has experienced one of its disastrous floods. Many people were affected by the flooding because they lost their belongings, made homeless and lost their homes.

In the worst flooding over 800 people were reported dying and there was a high risk of catching malaria and other diseases.

Don't use plagiarized sources. Get your custom essay on
“ Bangladesh and Mozambique Flooding ”
Get custom paper
NEW! smart matching with writer

There was no fresh water because all the wells, streams and ponds were contaminated by the flood water. All their farmlands were destroyed by the flood water which leads the people to face a hungry future. Roads and railway networks are been damaged making great difficulty in getting emergency supplies to people in need. The flooding was caused due to many reasons.

The main reason was the above average & long period of heavy rain which caused all 3 rivers to have their peak flow at the same time.

Other reasons for flooding is because most of the country consists of huge delta and floodplain, 70% of the total area is less than 1 meter above the sea level and 10% is made up of Rivers and lakes. These are only some of the Physical activities that caused flooding. These are some of human activities that made the worst flooding .

Some of them are Deforestation, increasing of population in , Construction of dam in India and Bangladesh is low economic developed country and its lack of money and heavy national debt means that the country only have less money to spend on Flood Protection.

Mozambique Floods Mozambique is located on the east coast of Africa, bordering South Africa, Zimbabwe, Malawi and United Republic of Tanzania. The country’s population is around 20 billion. Between February and March 2000 a massive flooding occurred in Mozambique and affected millions of people.

In is the worst flood in the country for 50 years. The flood affected more populated and economically developed areas. Over 600 lives were lost and more than 1 million people made homeless. Homes, crops and communities are damaged. Some of the Schools, hospitals Roads and bridges that had been rebuilt were swept. The water supply in the affected areas was out of service for days and electricity was disrupted for days. Over 150,000 peoples life were in danger from lack of diseases and no food.

Because all the roads and railways are damaged it made it difficult for aid and medical supplies to reach flood victims. There are many reasons for the flood to happen. These are some of the reasons that caused the flood. The flooding started on 9th of February with heavy rainfall. And then cyclone Eline swept across the southern Africa leading to three weeks of severe floods. The rain from Botswana and other Southern African countries ran into the Limpopo, Zambezi and other rivers which flow through Mozambique to the sea. These rivers eventually burst their banks, causing severe flooding in Mozambique. 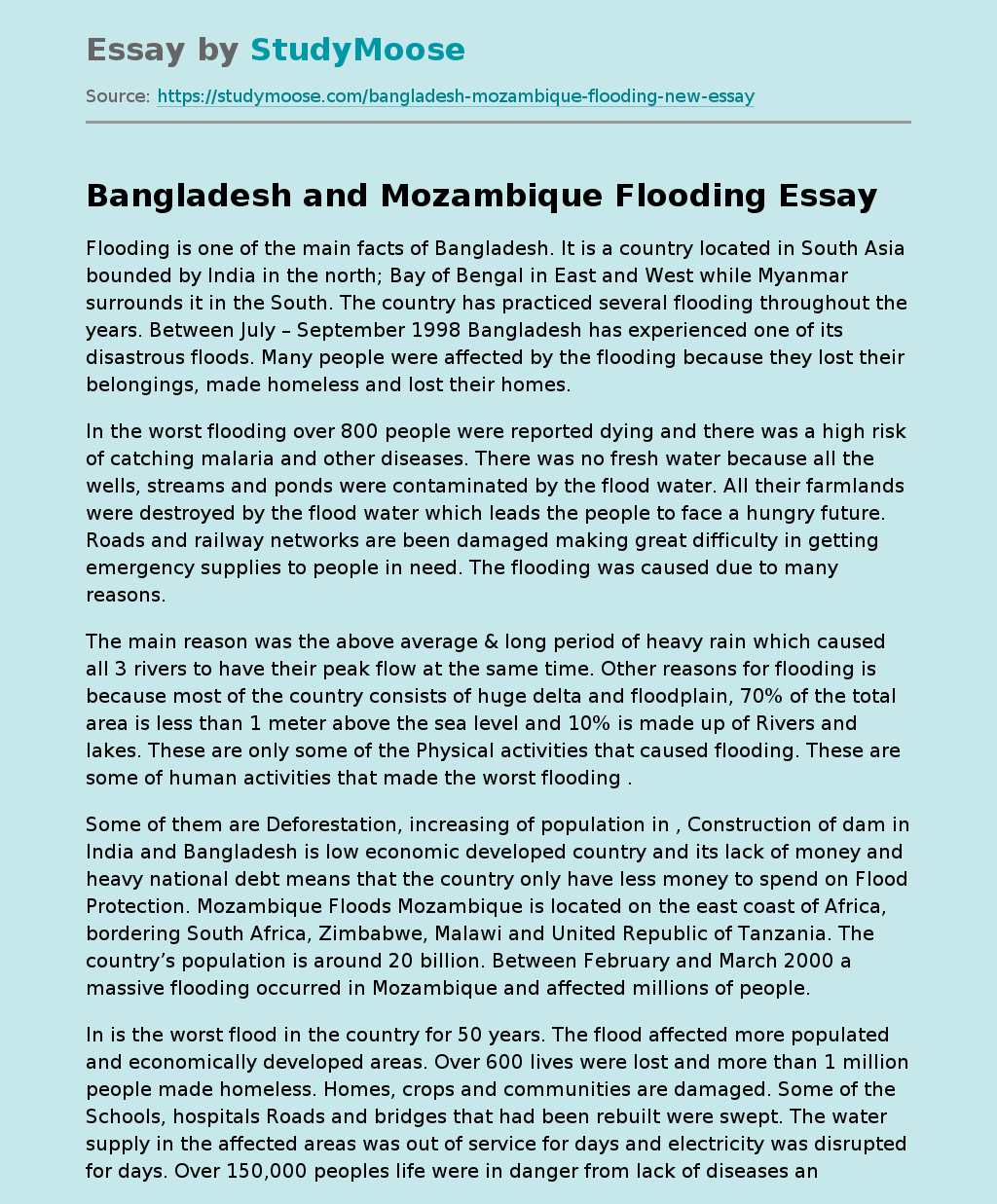