Prior to the industrial revolution, charcoal was occasionally used as cooking fuel. Modern “charcoal briquettes”, widely used for outdoor grilling and barbecues in backyards and on camping trips, imitate this use, but are not pure charcoal. They are usually compacted mixtures of sawdust with additives like coal or coke and various binders. Charcoal is the dark grey residue consisting of carbon, and any remaining ash, obtained by removing water and other volatile constituents from animal and vegetation substances.

Charcoal is usually produced by slow pyrolysis, the heating of wood or other substances in the absence of oxygen (see pyrolysis, char and biochar).

Don't use plagiarized sources. Get your custom essay on
“ Banana Peelings as Charcoal Briquette ”
Get custom paper
NEW! smart matching with writer

It is usually an impure form of carbon as it contains ash; however, sugar charcoal is among the purest forms of carbon readily available, particularly if it is not made by heating but by a dehydration with sulfuric acid to minimise introducing new impurities, as impurities can be removed from the sugar in advance.

Charcoal is a carbon-containing substance made from wood, naturally black and powdery. Charcoal is made from wood by heating it in airless space in high temperature. The wood will not burn, but instead turn into charcoal. The by-product of making charcoal is tar and turpentine. People use it for different things such as cooking on a barbecue grill, and in painting. http://en.wikipedia.org/wiki/Charcoal

Charcoal is a desirable fuel because it produces a hot, long-lasting, virtually smokeless fire. Combined with other materials and formed into uniform chunks called briquettes, it is popularly used for outdoor cooking in the United States.

According to the barbecue Industry Association, Americans bought 883,748 tons of charcoal briquettes in 1997. Basic charcoal is produced by burning a carbon-rich material such as wood in a low-oxygen atmosphere. This process drives off the moisture and volatile gases that were present in the original fuel.

The resulting charred material not only burns longer and more steadily than whole wood, but it is much lighter (one-fifth to one-third of its original weight). Read more: How charcoal briquette is made – material, making, history, used, components, product, industry, History, Raw Materials, The Manufacturing Process of charcoal briquette, Byproducts/Waste, The Future http://www.madehow.com/Volume-4/Charcoal-Briquette.html#b#ixzz1ybbwzLNy

Banana is the common name for herbaceous plants of the genus Musa and for the fruit they produce. It is one of the oldest cultivated plants. They are native to tropical South and Southeast Asia, and are likely to have been first domesticated in Papua New Guinea.[1]Today, they are cultivated throughout the tropics.[2] They are grown in at least 107 countries,[3] primarily for their fruit, and to a lesser extent to make fiber, banana wine and as ornamental plants. Its fruits, rich in starch, grow in clusters hanging from the top of the plant.

They come in a variety of sizes and colors when ripe, including yellow, purple, and red. Almost all modern edible parthenocarpic bananas come from two wild species – Musa acuminata and Musa balbisiana. The scientific names of bananas are Musa acuminata, Musa balbisiana or hybrids Musa acuminata × balbisiana, depending on their genomic constitution. The old scientific names Musa sapientum and Musa paradisiaca are no longer used. Banana is also used to describe Enset and Fe’i bananas, neither of which belong to the aforementioned species.

Enset bananas belong to the genus Ensete while the taxonomy of Fe’i-type cultivars is uncertain. In popular culture and commerce, “banana” usually refers to soft, sweet “dessert” bananas. By contrast, Musa cultivars with firmer, starchier fruit are called plantains or “cooking bananas”. The distinction is purely arbitrary and the terms “plantain” and “banana” are sometimes interchangeable depending on their usage. http://en.wikipedia.org/wiki/Banana

Organic matter is the peel’s principal constituent. Proteins account for 0.9 percent by weight of the peel, lipids are 1.7 percent, carbohydrates are 59.1 percent and crude fiber is 31.7 percent. This composition makes the peel a good animal feedstock. Carbon

When heated, the organic content of banana peels breaks down to its constituent carbon and gases to produce banana charcoal. The product originated in Uganda to substitute dwindling wood supplies as a cooking fuel. Read more: Components of a Banana Peel | eHow.com http://www.ehow.com/info_10033568_components-banana-peel.html#ixzz1ybeTnZCH 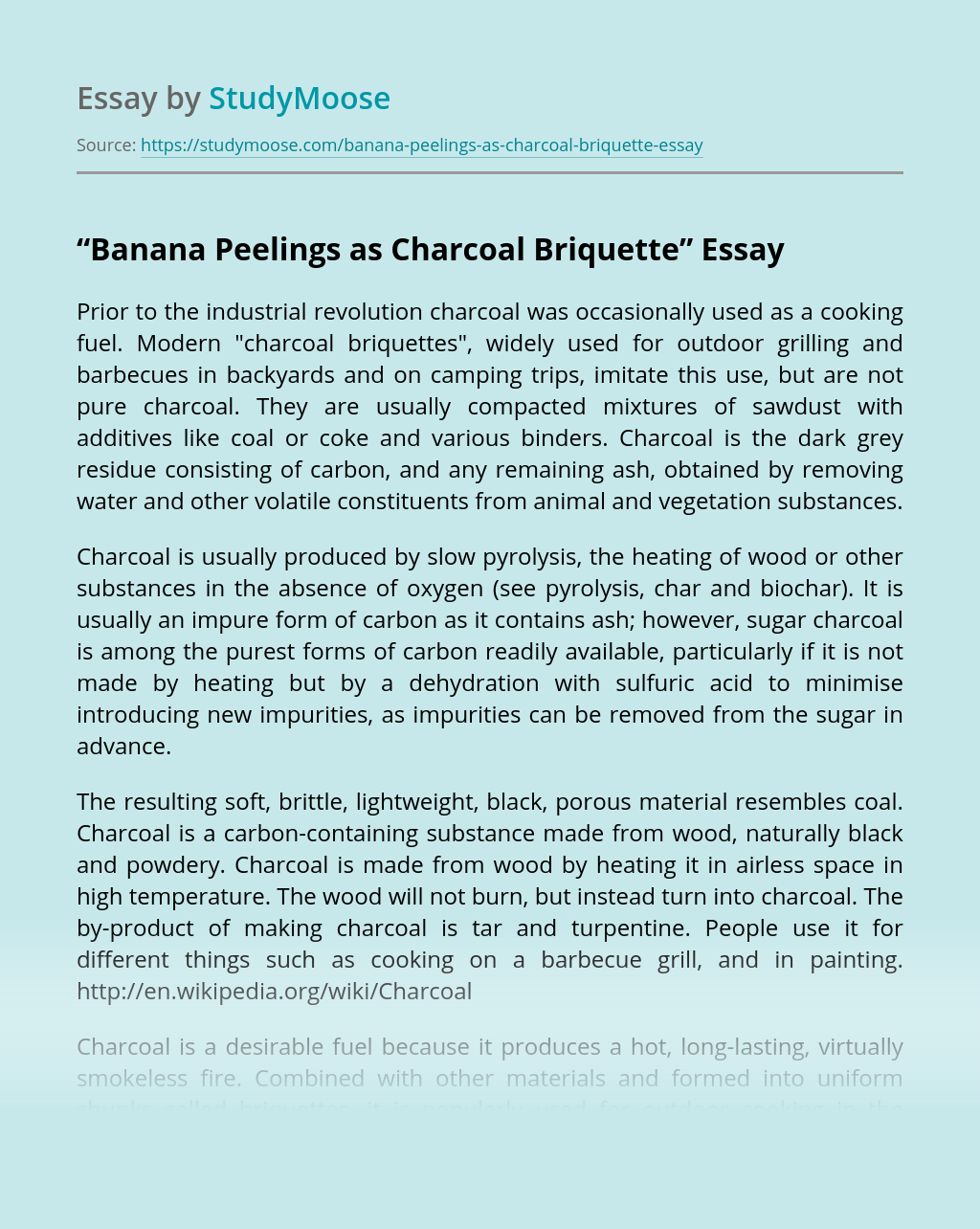