A banana is an edible fruit produced by several kinds of large herbaceous flowering plants of the genus Musa. The fruit is variable in size, color and firmness, but is usually elongated and curved, with soft flesh rich in starch covered with a rind which may be yellow, purple or red when ripe. When the peeling of this edible fruit is combined with charcoal and oil, can this act as a shoe polish?

A strong water-soluble antioxidant was identified in the popular commercial banana Musacavendishii.

Don't use plagiarized sources.
Get Your Custom Essay on Banana Peeiling as Shoe Polish Rrl Just from $13,9/Page

It is dopamine, one of the catecholamines. (Kanazawa, 2000) For suppressing the oxygen uptake of linoleic acid in an emulsion and scavenging a diphenylpicrylhydrazyl radical, dopamine had greater antioxidative potency than glutathione, food additives such as butylated hydroxyanisole and hydroxytoluene, flavone luteolin, flavonol quercetin, and catechin, and similar potency to the strongest antioxidants gallocatechin gallate and ascorbic acid. Bananacontained dopamine at high levels in both the peel and pulp. Dopamine is leveled from 80?560 mg per 100 g in peel and 2.

5?10 mg in pulp, even in ripened bananas that is ready to eat. Banana is one of the antioxidative foods. (Kanazawa, 2000)

As for the charcoal, the charcoal particle is considered as a solid microsponge, and its made of albumin, other protein, carbohydrate, or other large molecule as a molecular sieve surrounding the sponge. The whole constitutes a system of “instant dialysis,” with a wide range of applications in the separation of large from small molecules. (Gottlieb, M.D, 1965) Charcoal is a light black residue consisting of carbon, and any remaining ash, gained by removing water and other volatile constituents from animal and vegetable substances. Charcoal is usually produced by slow pyrolysis, the burning of wood or other substances in the absence of oxygen. It is usually an unclean form of carbon as it contains ash; however, sugar charcoal is among the purest forms of carbon readily available, particularly if it is not made by heating but by a dehydration reaction with sulfuric acid to minimize introducing new impurities, as impurities can be removed from the sugar in advance. The resulting soft, brittle, lightweight, black, porous material resembles coal.

Since medieval times, dubbin, a waxy product, was used to soften and waterproof leather; however, it did not impart shine. It was made from natural wax, oil, soda ash and tallow. As leather with a high natural veneer became popular in the eighteenth century, a high glossy finish became important, particularly on shoes and boots. In most cases, a variety of homemade polishes were used to provide this finish, often with lanolin or beeswax as a base.

In the nineteenth century, many forms of shoe polish became available, yet were rarely referred to as shoe polish or boot polish. Instead, they were often called blacking (especially when mixed with lampblack), or simply continued to be referred to as dubbin. Tallow, an animal by-product, was used to manufacture a simple form of shoe polish at this time. Chicago, Illinois, where 82% of the meat consumed in the United States was processed in the stock yards,
became a major shoe polish producing area for this reason. (Sajulan, Guzman Nagac, 2008) 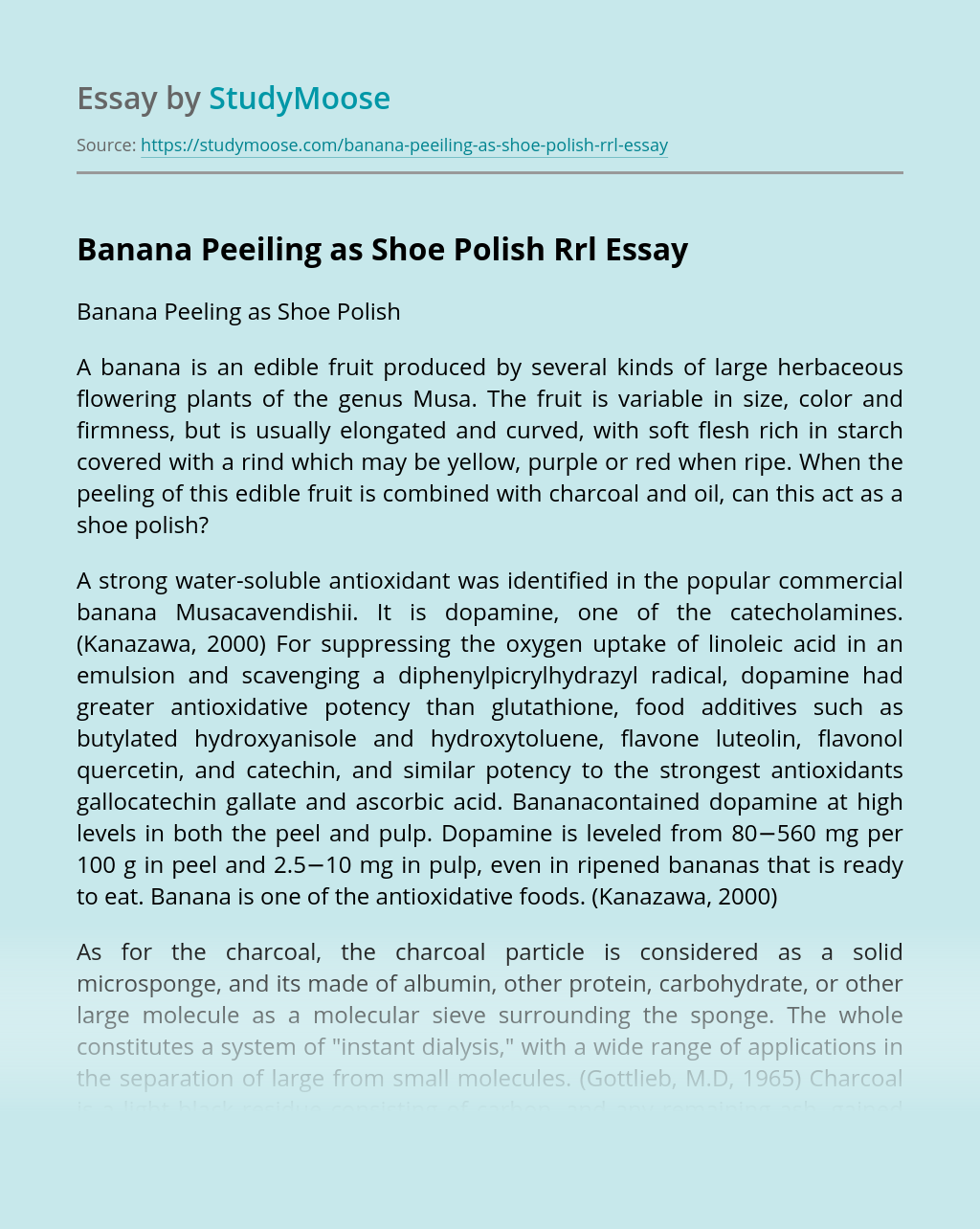 Banana (Saba) vinegar Conner is known as the fruit basket. One of the fruits that are abundant here is banana. The word “banana” is a general term embracing a number of species or hybrid in the genus Musa of the family Musaceae. there are many different kinds of banana found in Conner those are the...

Banana Peeling as Shoe Polish A banana is an edible fruit produced by several kinds of large herbaceous flowering plants of the genus Musa. The fruit is variable in size, color and firmness, but is usually elongated and curved, with soft flesh rich in starch covered with a rind which may be yellow, purple or...

Cyclone Larry destroyed approximately $300 worth bananas crop which is 90% of the production at Queensland. The fall in supply and unchanged demand will result in a shift of the supply curve to the left resulting in an increase of the equilibrium price. The demand will stay the same however there might be a slight...

REVIEW OF RELATED LITERATURE In a study, “Papers and Boards from Banana Stem Waste” in which they used banana stem waste in producing paper and board because banana is a very good source of cellulose. Banana stem waste, thrown away by farmers after harvesting of fruits, was procured as raw material. It was chopped by...

Having a good smile with white teeth, become one of the things that people wanted to achieve nowadays. Base on our research some toothpaste aren’taffordable at the same time it is not effective , now beacause of banana peel that contains some effective things to whiten and make our teeth stronger we have a idea...