This experiment is to determine what projectile for a Ballista will travel the furthest, to do this two variables will be changed through the duration of the testing period. These variables are: the angle and the different materials the projectile is made of. The three different materials being used for the projectiles are a pencil, a bit of wood and a replica of an original Ballista bolt. The Results of this experiment is hypothesised that the replica Ballista bolt will have the most range of the three.

Don't use plagiarized sources. Get your custom essay on
“ Ballista Physics ”
Get custom paper
NEW! smart matching with writer

Ballista Basic Information
A Ballista was one of the siege engines used during the Medieval Era and was an invaluable siege attack weapon. The Ballista was used by both the attackers and defenders as an effective anti-personal weapon. For defenders the positioning upon the walls of a fortification would afford additional range to the weapon, and some were placed on pivoting frames to allow for quickly repositioning a shot. For attackers, the Ballista was sometimes a wagon mounted carro-ballista, allowing it great mobility in the field.

History of a Ballista
The Ballista’s history dates back to antiquity. The Ballista is believed to be an ancient war engine which was invented by the Greeks and modified by the Romans in 400BC. The Ballista reached Europe during the Medieval era and was used extensively by the French. History notes that the Ballista was introduced to England in 1216 during the Siege of Dover – as were many other types of siege engines. Louis the Dauphin of France crossed the Channel with a large force and laid siege to Dover Castle making a violent and incessant attack on the castle walls.

He used the Ballista against the walls and men of Dover Castle.

Physics of a Ballista
The Ballista looked like a large frame-mounted crossbow, however, its firing mechanism was quite different. Two torsion springs mounted in a frame wound wind in opposite directions to pull back throwing arm. A rope, which was used in a similar way to a bow string, connected the two throwing arms and was mechanically retracted into firing position. The throwing arms were originally designed using wood and animal sinew (tendon tissue). It could be configured to throw either bolts or stones but eventually became primarily for bolt throwing. A Ballista’s mechanism (picture form Medievallifestyle.com)

Ballista Physics. (2016, May 11). Retrieved from https://studymoose.com/ballista-physics-essay 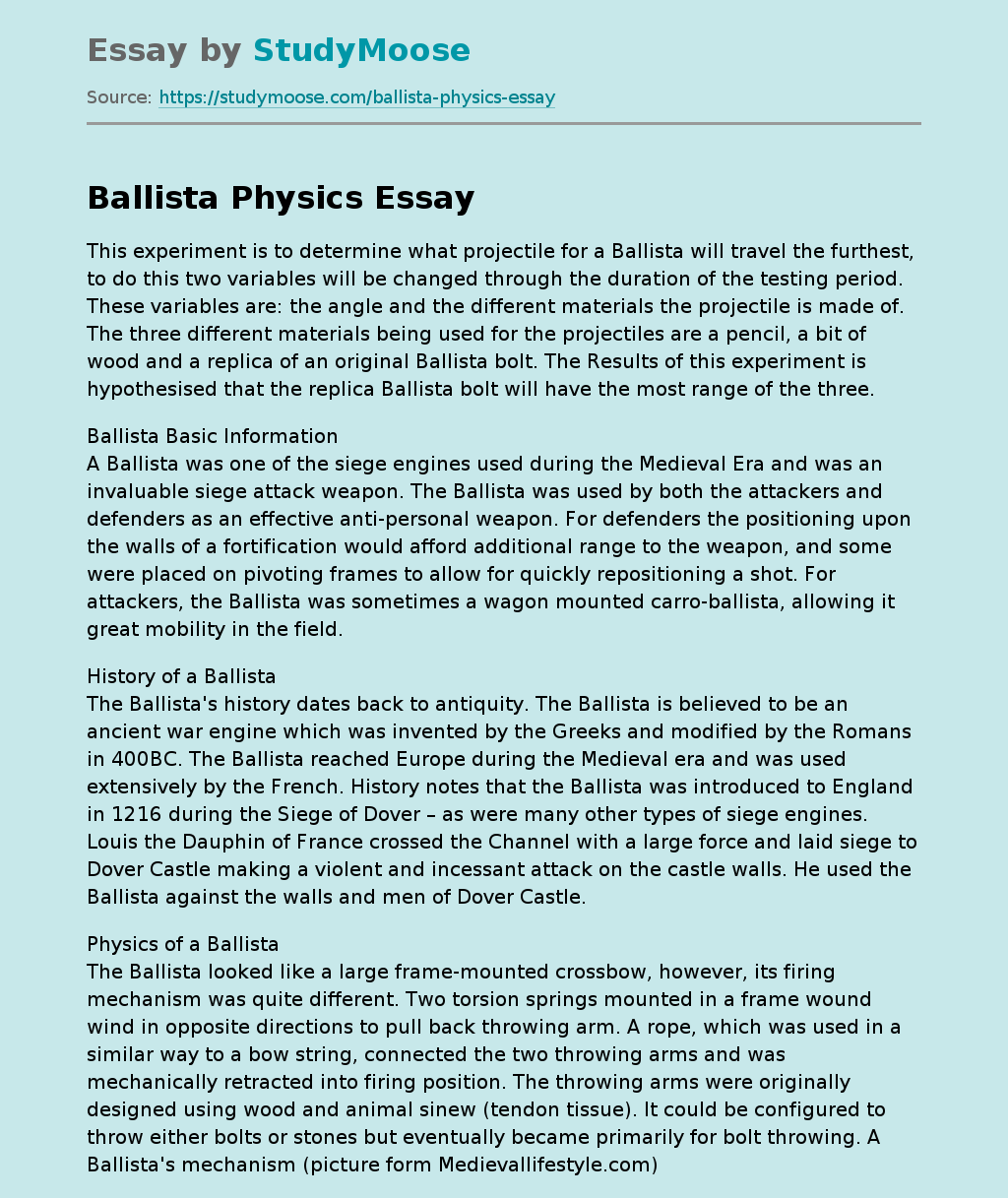