Grade inflation is the arbitrary assignment of higher grades for work that would have received lower grades in the past. The higher grades do not reflect a genuine improvement in student achievement. Only with systematic research can it be determined whether rising grades are a result of grade inflation or higher achievement. The pressure to inflate grades, and thereby reduce standards, which is placed on teachers can come from parents, students, schools and politicians, and is evidence of underlying credential inflation.

Don't use plagiarized sources. Get your custom essay on
“ Bad Grading System ”
Get custom paper
NEW! smart matching with writer

This is especially true since, if other schools or teachers are inflating grades, any school or teacher that takes a “hold out” stance will place its students at a disadvantage.

Some educators may feel pressured to give higher grades for fear of students complaining and receiving bad course evaluations, thereby diminishing their reputation resulting in denial of promotion or tenure, or causing them to face lower enrollment in their classes. Course evaluations produced by the students in a class are often used by committees to help them make decisions about awarding the teacher promotion and tenure.

A teacher may improve evaluations by improving their teaching, but the strategy that comes most quickly to mind for achieving better evaluations is to give higher grades for assignments and exams. A comprehensive study by Valen Johnson shows a statistical correlation between high grades and high course evaluations [Grade Inflation: A Crisis in Education, Springer-Verlag, 2003]. In a separate analysis of grades at Pennsylvania State University, the onset of grade inflation in the 1980s corresponds with the onset of mandatory course evaluations.

University took a rare stance against grade inflation in 2004, and publicly announced a policy designed to curb it. The policy states that A’s should account for less than 35 percent of the grades for undergraduate courses and less than 55 percent of grades for junior and senior independent work. The standard by which the grading record of each department or program is evaluated is the percentage of A’s given over the previous three years. Arguments against taking action on grade inflation:

A recent study, , collects historical data from 80 schools, in some cases dating back to the 1920s, and conclude clear evidence of nationwide grade inflation over time, and regular differences between classes of schools and departments. Main historical trends identified include:

The average at private schools is currently 3.3, while at public schools it is 3.0. This difference is partly but not entirely attributed to differences in quality of student body, as measured by standardized test scores or selectivity. After correcting for these factors, private schools grade on average .1 or .2 points higher than comparable public schools, depending on which measure is used. There is significant variation in grading between different schools, and across disciplines.

2 points above science departments. These differences between disciplines have been present for at least 40 years, and sparse earlier data suggests that they date back 70 years or more. Until recently, the evidence for grade inflation in the US has been sparse, largely anecdotal, and sometimes even contradictory; firm data on this issue was not abundant, nor was it easily attainable or amenable for analysis. 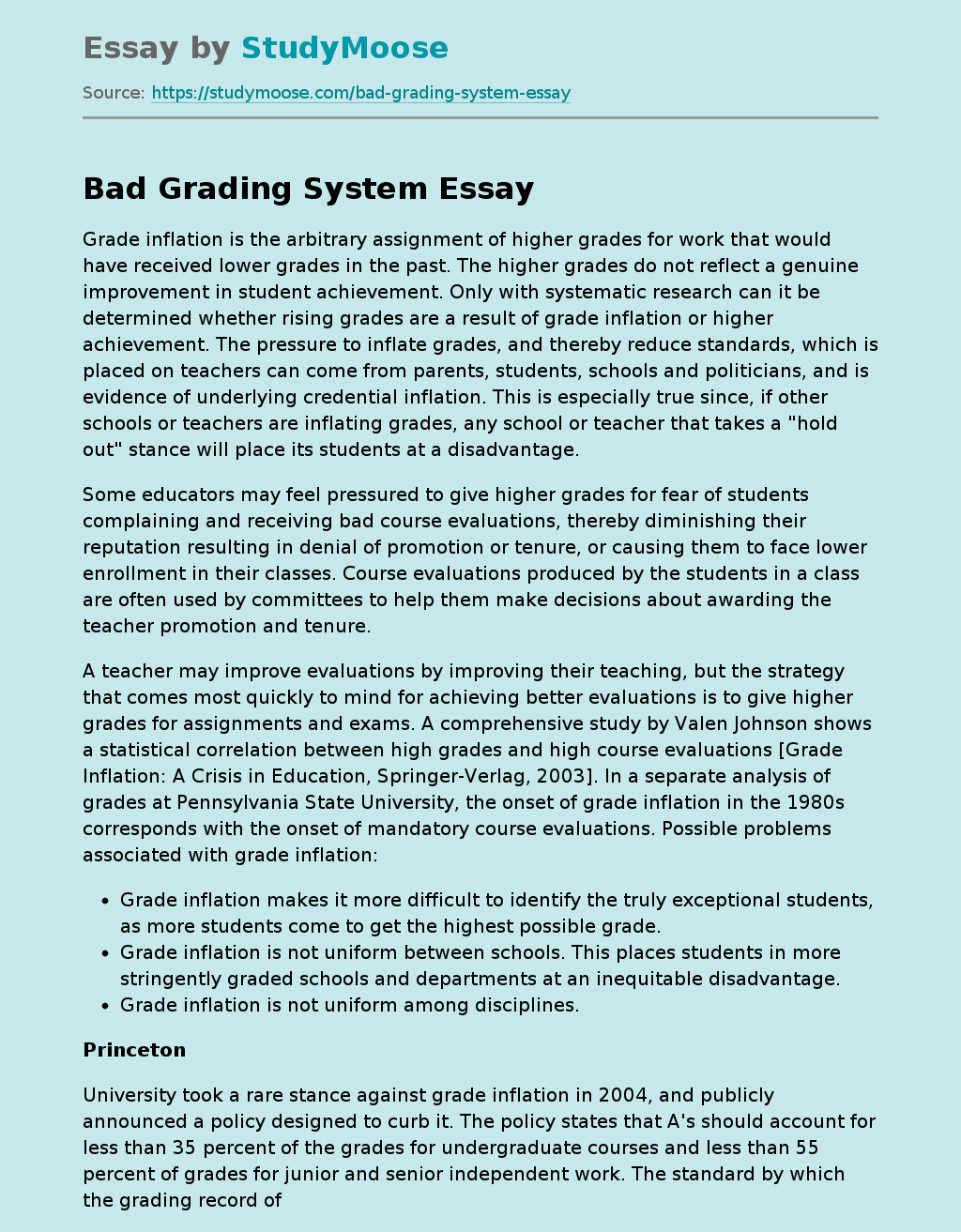