Back to the Future: Past, Present, and Future

There is much to discuss and analyze about all three installments. These would include actor choices, spotting, direction, acting, and most importantly the soundtrack and musical choices for all 3. Considering all 3 movie plots jump from decade to decade, it can be analyzed literally from past, present, and future. Inevitably, Back to the Future’s success also led to several video game launches, a ride at Universal Studios in Hollywood and Orlando, an animated series, and even a comic book. Let’s go back to the year 1985, you and your bodacious friends want to hang ten with the dudes, so you guys catch a flick at the local cineplex.

Don't use plagiarized sources. Get your custom essay on
“ Back to the Future: Past, Present, and Future ”
Get custom paper
NEW! smart matching with writer

Proficient in: Back to The Future

Stoltz was filmed for four weeks, but after seeing a rough cut, Steven Spielberg and the writer/directors decided that Stoltz had played the role “too seriously” for a comedy, and he was replaced by Michael J. Fox (Futurepedia). Back To The Future was written by Bob Gale and Robert Zemeckis, and mainly starred Michael J.

Fox and Christopher Lloyd. The movie opened on July 3, 1985 and grossed $210 million at the US box office, making it the highest grossing film of 1985 (IMDb). The basic synopsis of Back to the Future 1, is about a young man named Marty Mcfly who accidentally travels into the past and jeopardizes his own future existence.

With the help of an eccentric local scientist named Dr. Emmett L. Brown, he manages to travel back in time via a time machine made from a DeLorean. This was done by breaking the time barrier in what was called temporal displacement allowing it to travel along the space-time continuum.

When the first script was made, a refrigerator was the planned prop for the time machine. Later Steven Spielberg decided he didn’t want kids trapped inside their refrigerators trying to play time traveling games (Funtrivia). Done carefully, Bones Howe (music supervisor) and Alan Silvestri (composer) gathered an array of perfectly fit songs to cater both the 1950’s as well as the 1980’s. The movie jumps from decade to decade throughout the movie, and makes it apparent when it does. The movie starts out when Marty is late for school, he gets on his skateboard and we hear a fantastic song by Huey Lewis and the News, the “Power of Love. Later in the movie, we hear another solid track by Huey Lewis entitled “Back in Time. ” By the way, Huey Lewis makes a cameo as a judge. When Marty tries out for the school competition, Huey says, “hold it. hold it… I’m afraid you are just too darn loud. ” This is also considered diagetic music in the film. Marty’s first time travel sent him to the year 1955. Marty, immediately, arrives at the Twin Pines Ranch, which was owned by Otis Peabody. Marty crashes into the barn on Mr. Peabody’s property which causes the entire Peabody family to wake up and come outside.

Marty encounters many differences between 1985 and 1955, including a cleaner, less run-down ambiance in the Courthouse Square. While searching for a younger Doc Brown, he meets his father and accidentally interferes with the first meeting of his parents–being hit by his grandfather’s Chevrolet in his father’s place. While in the 1950’s, some of the songs we hear are such great classics “Night Train” by Marvin Berry, “Earth Angel (Will You Be Mine)” by Marvin Berry, “Wallflower” by Etta James, and “Johnny B. Goode” by Chuck Berry aka Marty Mcfly.

Some people complained that Back to the Future was a racist movie because Chuck Berry was inspired by a white guy. Sometimes a joke is just a joke; but Chuck Berry liked it. (Davis). Finally we have the sensational score by Alan Silvestri. At times the score is adventurous, and at times it’s sad. The spotting is done just right to balance the dynamics of the movie. Also, there is a leitmotif that accompanies the movie, in fact, it accompanies all 3 movies of the trilogy, and never goes unnoticed. Upon the success of the first film, Robert Zemeckis (director) and Bob Gale (writer) agreed to do a 2nd movie.

In fact, they also intended on a 3rd movie, and both the 2nd and 3rd Back to the Future were filmed simultaneously and released six months apart. Back to the Future 2, with a budget of $40 million, grossed nearly $331 million at the box office (IMDb). The characters of George Mcfly and Jennifer Parker were played by different actors from those in the first film, requiring scenes that overlap to be re-shot. Jennifer Parker which was originally played by Claudia Wells, and replaced by Elisabeth Shue in the second film. Claudia claims she turned the roll down when she found out her mother was diagnosed with cancer (Futurepedia).

George Mcfly, who was originally played by the quirky Crispin Glover, was later replaced by Jeffrey Weissman. Crispin Glover refused to return to the trilogy due to salary disputes. Back to the Future 2 pans back and forth from 1955, to 1985, and all the way to 2015; the past, present and future. Needless to say, Bob Gale and Zemeckis attempted to predict what 2015 would like and sound like. Some songs used in the 2015 scenes, were “Beat it” by Michael Jackson, “I Can’t Drive 55” by Sammy Hagar, “Mr. Sandman” by The Four Aces, and “Papa Loves Mambo” by the Perry Como.

The filmmakers did do some research into what scientists thought may occur in the year 2015. Bob Gale also commented; “We knew we weren’t going have flying cars by the year 2015, but God we had to have those in our movie. “(Q ;amp; A) The film was also considered one of the most ground-breaking projects for Industrial Light ;amp; Magic. It was one of the effects house’s first forays into digital compositing, as well as the VistaGlide motion control camera system, which enabled them to shoot one of the film’s most complex sequences, in which Michael J.

Fox played three separate characters, all of whom interacted with each other. Although such scenes were not new, the VistaGlide allowed, for the first time, a completely dynamic scene in which camera movement could finally be incorporated. The technique was also used in scenes where Thomas F. Wilson’s character (Biff Tannen) had to interact with a younger version of himself. (Zemeckis) Six months after Back to the Future 2 was released in the theaters, the Back to the Future team released Back to the Future 3 on May 25, 1990.

Again on a budget of $40 million, this one cashed in at $244 Million. The film takes place immediately after the events of Back to the Future Part II. While stranded in 1955, Marty McFly discovers that his friend Dr. Emmett “Doc” Brown was killed by Biff Tannen’s great-grandfather Buford. Marty decides to travel to 1885 to rescue Doc and return to his own timeline. This time, Alan Silvestri had to create his soundtrack based in the year 1885. However, he still maintained the leitmotif throughout the picture.

The years 1985 and 1955 are still relevant in the 3rd movie, and it jumps around. The popular group ZZ Top make an appearance, as they perform “Doubleback” during a festival in 1885. This was also considered diagetic —-performed for the actors and the audience to hear. Huey Lewis’ “Power of Love” is also heard again. In 1989, a video game, based on the original Back to the Future movie was produced for the 8-bit Nintendo Entertainment System (NES) by video game publisher LJN a subsidiary of Acclaim games. This has some similarity to the 1983 Atari video game E. T. where producers felt it would sell solely on brand association to the hit movie and the game designers were only given five weeks in order to produce a product to get it on the shelves for the 1982 Christmas shopping rush. Reviewers also cited that game as virtually unlike the film and was a major contributor to an economic downturn known as the Great Video Game Crash of 1983. There are only two songs found in the entire game. One is “Johnny B. Goode” which will play during the school dance that Marty is playing on stage and sounds close to the version heard in the film.

The other song is a repetitive looping song that will play throughout the game in non-mini game moments. There are suggestions that the song is supposed to be “The Power Of Love” by Huey Lewis ;amp; The News sped up and cycled differently. But it winds up sounding nothing like the actual song made famous in the movie. Nes also later released Back to the Future 2 and 3 as a single game in 1990. Back to the Future II ;amp; III received largely negative reviews from critics. Stan Stepanic of Gamefreaks365. om gave the game positive remarks in regards to similarities with The Goonies II, but gave it a largely negative review due to the lack of a password or save feature coupled with its notorious length, although there was a code to skip to the second half of the game. Back to the Future II ;amp; III’s length has often been cited as the game’s major weakness, Stan stating that it took him roughly six hours just to map it, and he spent so much time trying to finish it he actually turned it off out of boredom. (Gamefreaks). Sega Genesis also released their own version of Back to the Future 3 in 1991.

It was a lot different than the Nintendo version. However, it was just as unpopular, the opening level was nearly impossible to complete. Finally in 2010, Telltale Games released Back to the Future on PC and Mac; and later was also released on the Ipad and Playstation 3. This was given way better reviews than the predecessors, and remains the best game of yet. Ben PerLee from GameZone summarized his praise of the game by saying it is a “feel good cinematic experience that any fan of Back to the Future will want to check out, and everyone else would do well to check it out. GameZone) Back to the Future: The Animated Series was an animated series based on the Back to the Future trilogy as well. The series lasted two seasons, each lasting 13 episodes, and ran on CBS from September 7, 1991 to November 28, 1992, the date of the last original episode. Harvey Comics also published a series of Back to the Future comic books starting in November 1991. With the cover header reading “The Adventure Has Only Begun! ,” the first issue featured Doc &amp; Marty in 1927 Chicago. On May 2,1991 the Universal Studios Theme park in Florida released Back To The Future: The Ride.

Back to the Future: Past, Present, and Future. (2018, Oct 26). Retrieved from https://studymoose.com/back-to-the-future-past-present-and-future-essay 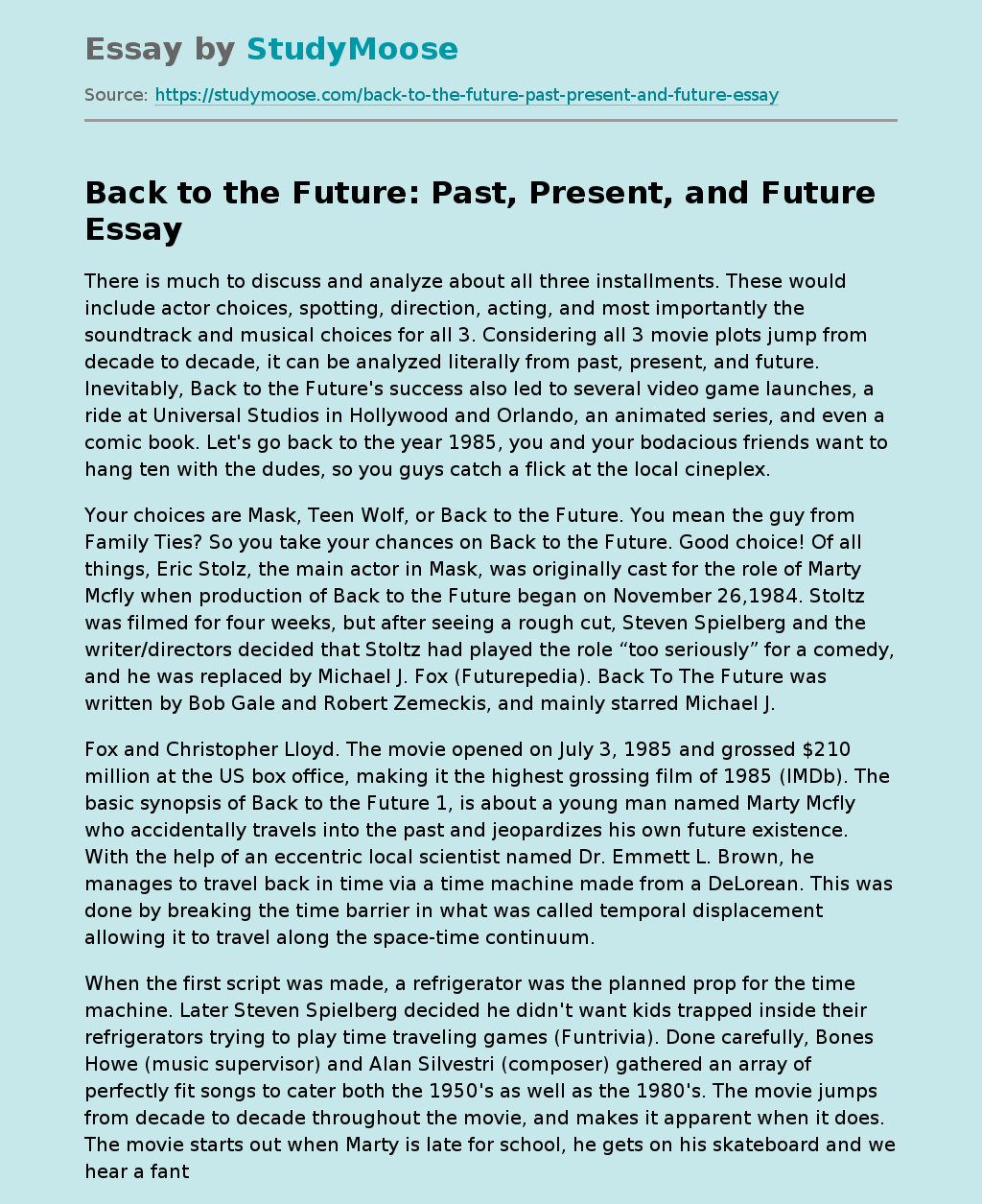