I. Introduction of cultural part:

How does it reflect the culture as a whole? Food is thought about to be a fundamental part of Aztec society because the Aztecs had no type of currency for their economy. According to allabouthistory.org, the Aztecs had a barter system, generally a trading system where they used foods, mainly cacao beans to trade one another for products such as clothes, eggs, and etc. for daily use. The amount of beans traded would vary from product to item depending on its worth.

Don't use plagiarized sources. Get your custom essay on
“ Aztec Food and Agriculture Informative Speech ”
Get custom paper
NEW! smart matching with writer

The Aztecs only ate two meals a day, unlike individuals today. Because the ancient Aztecs had no access to animals such as cows and pigs, which were later presented to them by the Spanish, their primary diet included vegetables and fruits such as corn, squash, beans, tomatoes, avocados, and etc.

Though they did have domesticated turkeys, ducks, and pet dogs for food, they just played a small contribution to the diet plan. According to foodtimeline.org, the Aztecs also hunted and ate fish, insects, iguanas, and deer however these sources were likewise very limited like the turkeys and pet dogs.

The Aztecs’ number one staple food was corn, specifically a type of corn called maize. It came in various shapes, sizes and colors and was eaten by all classes of the Aztec people. Maize is so important to Aztec society that it played a large part in their mythology and religion and was considered as precious as their flesh and bones.

It is like the rice in Asia and the wheat in Europe. A meal would not be called a meal unless they had corn in it. There are various ways to eat corn such as corn tortillas, tamales, corn soup also called pozole, and many other ways. One particular method of preparing maize is called nixtamalization where a salty flavor and aroma is added to maize. Apart from maize, other staple foods would be beans and squash. To help add flavor into the food, they would be mixed with tomatoes, fruits, and spices such as chilies and herbs. That way, the food would be nutritionally satisfying and there will be no need for animal protein. The Aztecs also had a very special drink made from cacao, you could say that the origin of chocolate came from the Aztecs. This chocolate drink was spicy unlike the hot chocolate we have today and was intended only for the warriors and nobles of the empire.

Because the lands that the Aztecs lived in were not suitable and fertile enough for farming, they had to invent new methods and use them to increase productivity of foods and crops. That led to a very special way of farming. The Aztecs invented and built Chinampas also called raised fields, which were floating agricultural gardens where they produced their crops. These Chinampas used to be swamps that were turned into highly productive fields for farming. Building Chinampas was a lot more complex than growing their crops because it uses many advanced techniques and methods never seen before during the pre-contact New World period. Other than the Chinampas, they also built irrigation systems for fields of land where water or rainfall could not reach and used fertilizers on fields that didn’t have enough nutrients.

According to foodtimeline.org , a Chinampa is built by first finding a swamp/lake near a town or city. Then ditches are dug through the marshes and swamps to drain excess water from the soon to be Chinampas, these ditches will also become the canals where the Aztecs will be traveling through to get from Chinampa to Chinampa. After that, the mud and muck from the ditches
and vegetation will be placed on mats, which were made from weeds and straw between the ditches where they will become long artificial islands for farming purposes. The Aztecs would then drive wooden stakes/fences down into the lake to hold the field together. Then trees would be planted in the corners of the island to help stabilize the Chinampa. Once that is done, the Chinampa will be ready to be used for farming corn, squash, beans, etc. The muck and vegetation would act as fertilizer for the crops while the mats would be piled high enough to prevent the roots of the crops from being waterlogged. Fertility is easily maintained by periodically adding more muck and fertilizer to the fields. Since these floating gardens were very productive, they always led to a surplus of crops that would be stored and used during hard times.

The foods that the Aztecs grew and ate are still used in traditional Mexican food today. Maize, the key ingredient of ancient Aztec food also became the most important ingredient to Mexican food. Other food ingredients in the Mexican diet today would also include beans, squash, chilies and tomatoes that the Aztecs also ate. The Aztec tacos for example, were filled with acocil, a type of crayfish but now, the tacos we have are filled with beef instead. Nixtamalization, is another influence that came from the Aztecs that is still used today. According to threestonehearth.com, what nixtamalization does is that it cooks and steeps dried corn kernels in an alkaline solution then they are cooked until tender. That way, it can be mashed and be made into a dough-like substance where it can be made into tortilla, tortilla chips, tamales, and many other items. Aztec food culture also expanded into many other countries because cacao beans which were the main ingredient of chocolate were brought over to Europe thanks to the Spanish quickly became a delicacy everywhere.

Overall, the Aztec diet consisted of mainly corn. Without corn, the meal wouldn’t be considered as a meal. Agriculture techniques was recreated with the invention of the Chinampa. With the newly invented Chinampa, Aztecs were able to dramatically increase the amount of crops they could grow unlike how they were struggling with growing crops on the unfertile lands. The Aztec food culture had inspired many countries today. Look at how chocolate, once a hot and spicy drink, was made into a global phenomenon. 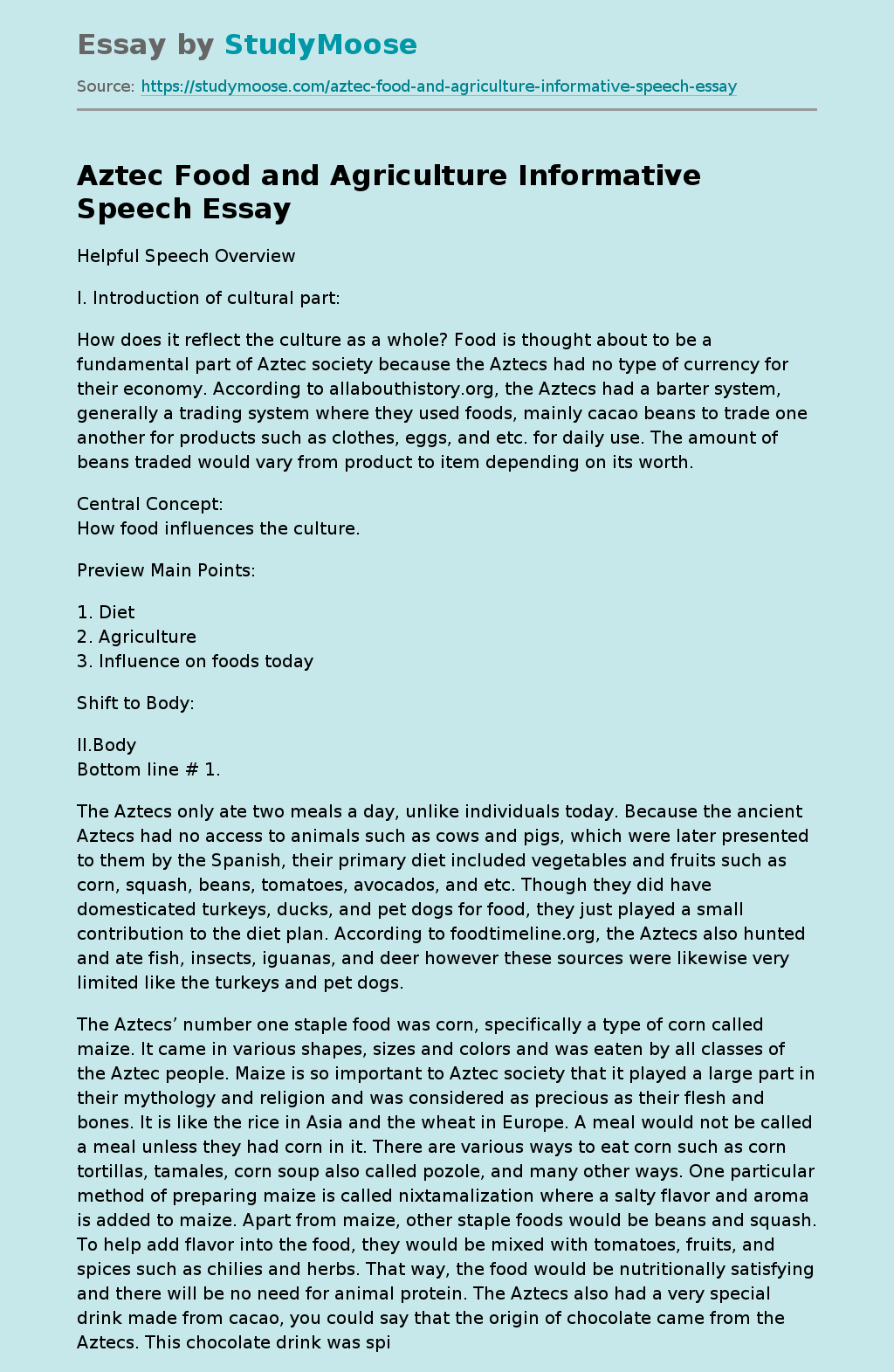