Five-star hotel affiliated with the Ramada Renaissance hotel chain. Located in Lahore, the capital of the Punjab province in Pakistan. Established in 1978 by Byram Avari as part of the Hilton hotel chain. Independently operating since 1987.

Avari priced its rooms on the basis of competition and demand. The rates at Avari were revised and adjusted twice a year according to the inflation rate. Avari’s policy is not turning away any guest so they have set different types of rates such as: Individual rates – include rack rate (for frequent individual travelers), commercial rate (for those having no account but good reputed) and preferential rate (lowest rate).

Special discount program offered every year by the hotel during its period of low occupancy (45 – 50 % occupancy rate). Other promotional activities Other forms of promotion used at Avari included free bed tea and meals, and customer relationship management. Management at Avari developed a mailing list which included the names of all previous clients. Leaflets and newsletters were sent to this list of clients to keep them informed and updated with the hotel’s activities and offers.

At that time their competitor was “Pearl Continental”, the only other five-star hotel in Lahore. The rooms at Pearl were more spacious than those at Avari, and their lawns were also larger. Pearl had pricing policies similar to those of Avari. The rate structure was the same, and the review and re-assessment of contracted room rates took place twice a year. Rooms at Pearl were priced at 100 to 200 Rupees below the prices of Avari. Avari maintained a higher average room rate than Pearl (the difference was been between 120 and 130 Rupees). Management believed that this higher average room rate was achieved because of Avari’s superior service, which attracted more customers.

In 1992 it was expected that Sheraton and Holiday Inn would be completed and both hotels were an imminent threat to the existing five star hotels in Lahore because of their good image in the minds of the consumers in Pakistan.

Every year the target for the average room rate was increased by 10%. Room rates were increased twice a year – in January and June. Avari placed great emphasis on getting business accounts from Pearl. Occupancy target rate: 82% in 1988, and 85% in 1989.

Since mid-November, Avari’s average room rate was falling below Pearl’s. This was a clear sign that Avari’s pricing policies needed to be reviewed and other alternatives needed to be considered. The problem faced by management of Avari occurred in December 1988 when Avari’s average room rate (Rs 1000) was lower than Pearl’s (Rs 1065). This was a challenging task for marketing managers because their performance was evaluated on the basis of target average room rate and occupancy level which was 70% in Avari and 80% in Pearl. Another challenge was that Avari’s image, unlike the image of Pearl or former Hilton, had not been yet fully formed in the minds of customers. Threats: entry of Sheraton and Holiday Inn hotels.

Avari should focus on creating a brand image in the minds of the customers, so when a potential customer thinks of staying in Lahore, the first hotel that comes to mind would be Avari. Avari should use a profit oriented approach and its focus should be to increase the average occupancy rate and the average room rate. Avari can use a bundling strategy. This can be done by combining two services. For example, a vacation package with two hotel room nights and a flight ticket at one price, or room + car rental at one price. It is also very important that Avari focuses on improving their summer package services which are lagging behind Pearl’s. Occupancy rate is the lowest during the summer period and Avari needs to introduce the best offers and discounts to improve their current 50% rate.

Avari needs to learn the lesson and take the example of Pearl. Having a strong competitor like Pearl is beneficial to Avari because they can learn a lot of lessons from their way of doing business, so they can improve their pricing strategies and promotional activities, and ultimately attract more customers and increase hotel occupancy rate. To respond to the threat of new entrants such as Sheraton and Holiday Inn, Avari needs to offer high-quality and variety of differentiated and unique services. These are very strong competitors with established brand images, but on the other hand Avari has the first-mover advantage in the Lahore area. 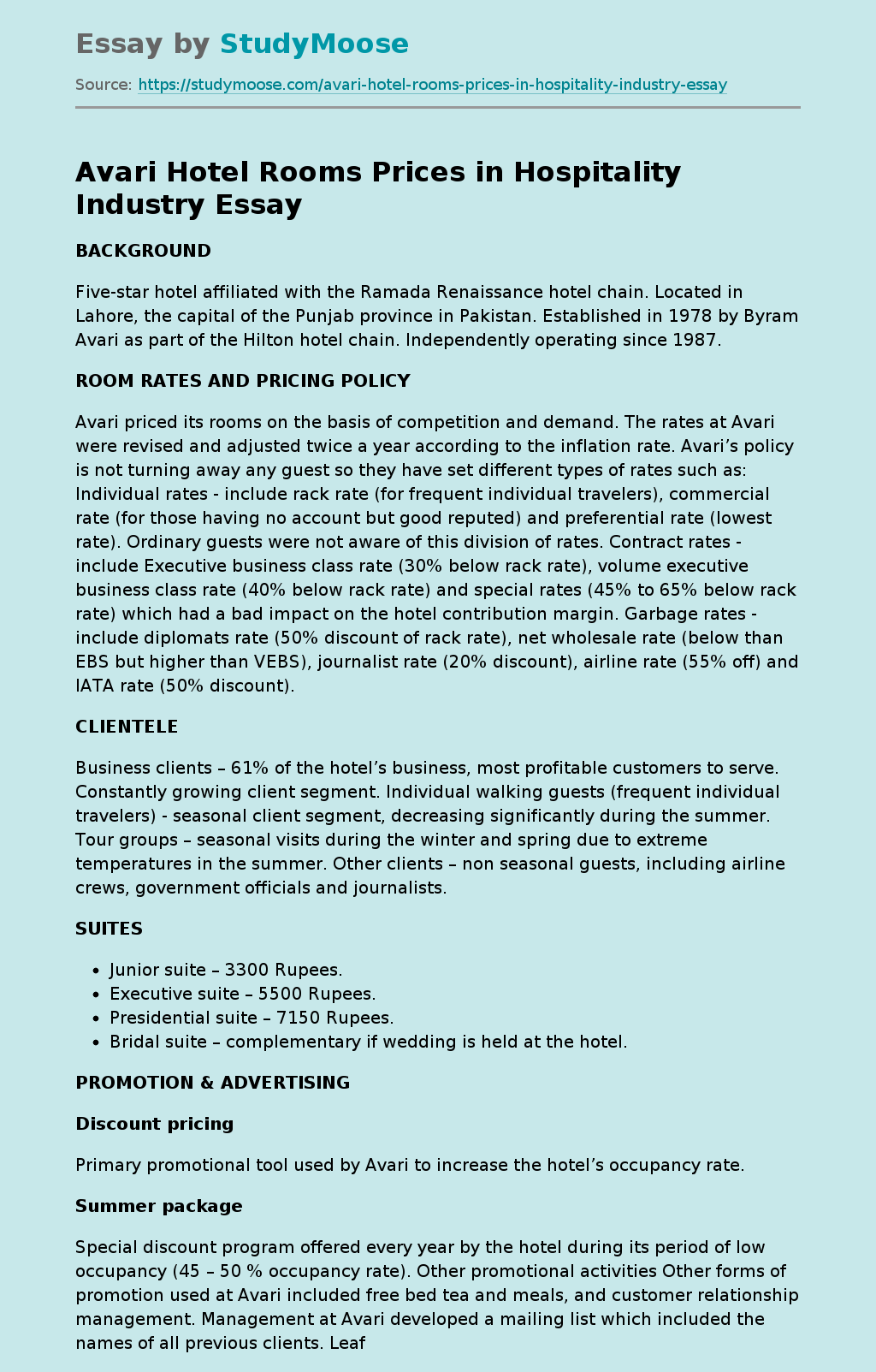