Ruskin Bond was born in a military hospital in [Kasauli] to Edith Clerke and Aubrey Bond. His siblings were Ellen and William. Ruskin’s father was with the Royal Air Force. When Bond was four years old, his mother was separated from his father and married a Punjabi-Hindu, Mr. Hari, who himself had been married once. Bond spent his early childhood in Jamnagar and Shimla. At the age of ten Ruskin went to live at his grandmother’s house in Dehradun after his father’s sudden death in 1944 from malaria.

Ruskin was raised by his mother, who remarried an Indian businessman. He completed his schooling at Bishop in Shimla, from where he graduated in 1952 after having been successful in winning several writing competitions in the school like Irwin Divinity Prize, Hailey Literature Prize. Ruskin’s love for books and writing came early to him since his father had surrounded him with books and encouraged him to write little descriptions of nature and he took his son on hikes in the hills.

After his high school education he spent four years in England. In London he started writing his first novel, The Room on the Roof, the semi-autobiographical story of the orphaned Anglo-Indian boy Rusty. It won the 1957 John Llewellyn Rhys prize, awarded to a British Commonwealth writer under 30. Bond used the advance money from the book to pay the sea passage to Bombay. He worked for some years as a journalist in Delhi and Dehradun. Since 1963 he has lived as a freelance writer in Mussoorie, a town in the Himalayan foothills.

He wrote Vagrants in the Valley, as a sequel to The Room on the Roof. These two novels were published in one volume by Penguin India in 1993. The following year a collection of his non-fiction writings, The Best of Ruskin Bond was published by Penguin India. His interest in the paranormal led him to write popular titles such as Ghost Stories from the Raj, A Season of Ghosts, A Face in the Dark and other Hauntings.

The Indian Council for Child Education recognized his pioneering role in the growth of children’s literature in India, and awarded him the Sahitya Academy Award in 1992 for Our Trees Still Grow in Dehra. He received the Padma Shri in 1999.

Media-shy, he currently lives in Landour, Mussoorie’s Ivy Cottage, which has been his home since 1964

Based on Bond’s historical novella A Flight of Pigeons (about an episode during the Indian Rebellion of 1857), the Hindi film Junoon was produced in 1978 by Shashi Kapoor and directed by Shyam Benegal). Ruskin Bond made his maiden big screen appearance with a cameo in Vishal Bhardwaj’s film 7 Khoon Maaf, based on his short story Susanna’s Seven Husbands. Bond appears as a Bishop in the movie with Priyanka Chopra playing the title role.[2] Bond had earlier collaborated with him in the The Blue Umbrella which was also based on his story.

Most of his works are influenced by life in the hill stations at the foothills of the Himalayas, where he spent his childhood. His first novel, The Room On the Roof, was written when he was 17 and published when he was 21. It was partly based on his experiences at Dehra Dun, in his small rented room on the roof, and his friends. Since then he has written over three hundred short stories, essays and novels, including Vagrants in The Valley, The Blue Umbrella, Funny Side Up, A Flight of Pigeons and more than 30 books for children. He has also published two volumes of autobiography. Scenes from a Writer’s Life describes his formative years growing up in Anglo-India; The Lamp is Lit is a collection of essays and episodes from his journal.

Bond said that while his autobiographical work, Rain in the Mountains, was about his years spent in Mussoorie, Scenes from a Writer’s Life described his first 21 years. Scenes from a Writer’s Life focuses on Bond’s trip to England, his struggle to find a publisher for his first book The Room on the Roof and his yearning to come back to India, particularly to Doon. “It also tells a lot about my parents,” said Bond. “The book ends with the publication of my first novel and my decision to make writing my livelihood,” Bond said, adding, “basically it describes how I became a writer”.

His novel, The Flight of Pigeons, has been adapted into the Merchant Ivory film Junoon. The Room on the Roof has been adapted into a BBC-produced TV series. Several stories have been incorporated in the school curriculum in India, including “The Night Train at Deoli”, “Time Stops at Shamli”, and Our Trees Still Grow in Dehra. In 2007, the Bollywood director Vishal Bharadwaj made a film based on his popular novel for children, The Blue Umbrella. The movie

Ruskin Bonds first novel, The Room on the Roof, written when he was seventeen, won the John Llewellyn Rhys Memorial Prize in 1957. Vagrants in the Valley was also written in his teens and picks up from where The Room leaves off. These two novellas were published in one volume in 1993. His non-fiction writing, Rain in the Mountains was also much acclaimed. Since then he has written several novellas (including Vagrants in the Valley, A Flight of Pigeons and Delhi Is Not Far), essays, poems and children books.

Ruskin Bond has also written over 500 short stories and articles that have appeared in a number of magazines and anthologies. His novel, The Flight of Pigeons was adapted into a movie, Junoon.

Bond started displaying his literary talent in England. He wrote his first novel named ‘Room On The Roof’ when he was all of 17 years. The book made him win prestigious ‘John Llewellyn Rhys’ Prize that is awarded to British Commonwealth Writers who are under the age of 30. The book was primarily based in and around Himalayas and was successful in capturing its beauty and ethos in a manner that was never tried before. Its sequel named ‘Vagrants in the Valley’ followed it. Riding on the success of these two novels, Ruskin took the journey back home.

Ruskin Bond has now been writing for more than 5 decades. He has stressed more on the local elements of Himalayas in his writings. His writing style is distinct in a way that it tries to make reader understand the landscape and ethos through carefully mastered words. His writings have won him both tremendous critical acclaim as well as a long list of fans through out the literary world. Replete with unassuming humor and quiet wisdom, his stories manifest a deep love for nature and people. His mesmerizing descriptions about the flora and fauna of Himalayas can not be missed in his 100 something short stories, essays, novels, and more than thirty books of children that he has written.

His works has inspired several generations of writers, authors and scriptwriters. His novel named ‘The Flight of Pigeons’ has been adapted into the acclaimed Merchant Ivory film Junoon. Another less known novel named ‘The Room on the Roof’ has been adapted in to a BBC produced TV series. Nevertheless his greatest achievement comes from the fact that several of his short stories from his collections have been incorporated in the school curriculum all over India. It includes jewels such as The Night Train at Deoli, Time Stops at Shamli and Our Trees Still Grow in Dehra. In spite of all these successes, Bond can be concluded today as a media-shy and reclusive literary genius. He spends his days with his adopted family at a place close to Dehradun. He received the Sahitya Academy Award for English writing in India for ‘Our Trees Still grows in Dehra’ in 1992. He has also been conferred with Padma Shri, one of the most prestigious civil awards in India. 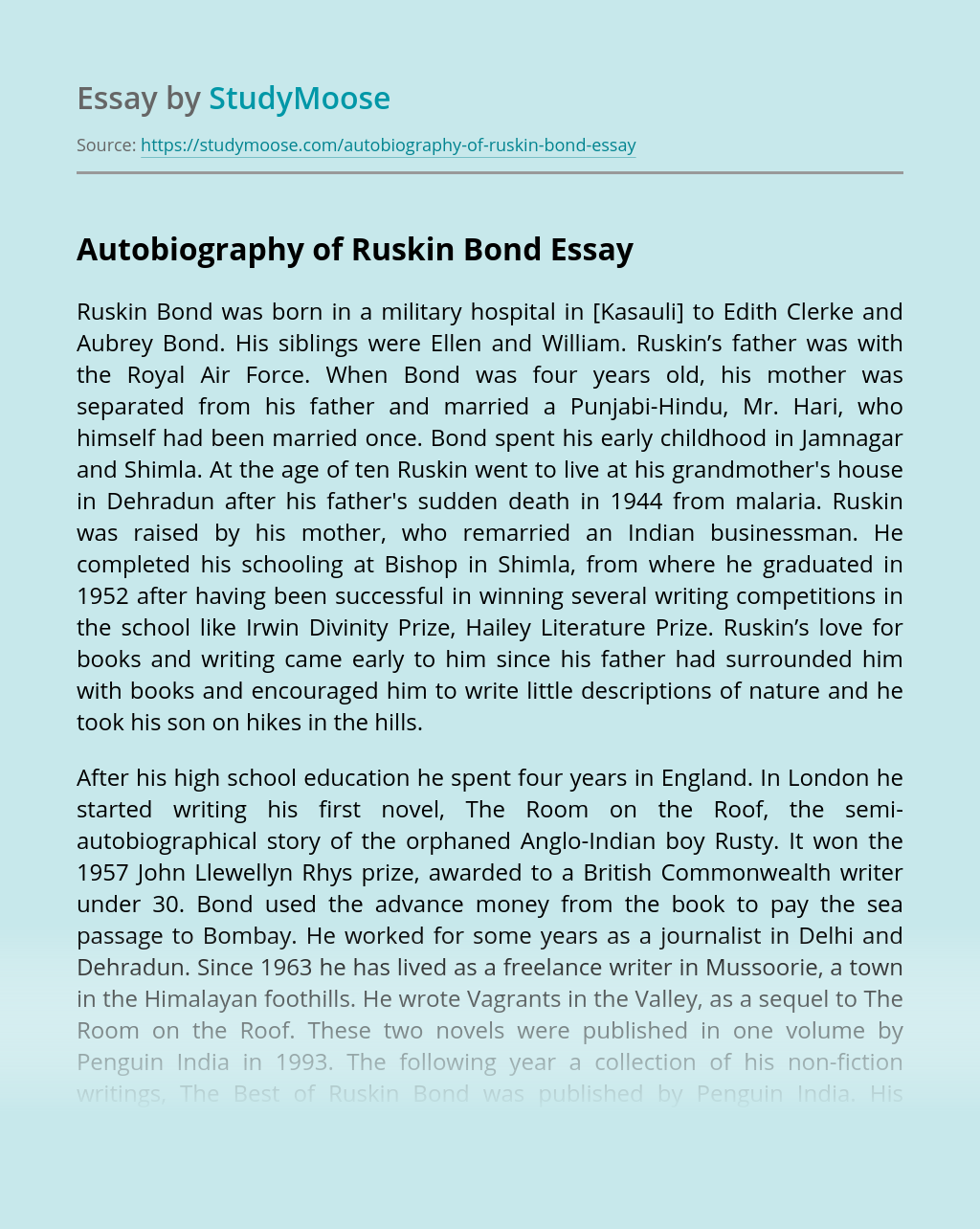 Don’t waste time
Get a verified expert to help you with Autobiography of Ruskin Bond
Hire verified expert
$35.80 for a 2-page paper
Stay Safe, Stay Original