The word personality can be defined as the sum of total organized physical, mental, emotional, and social behavioral characteristics of an individual. The human is described to have a personality that represent himself which it is reflected in its being. But there’s characteristics that shapes each personality those attributes are separate in two main dimensions called external factors that can be personal habits, geographic location, income, appearance, or religion and in the other side there’s internal factors that can be age, race, ethnicity, or gender.

Don't use plagiarized sources. Get your custom essay on
“ Authorial Voice in Kate Chopin’s The Story of an Hour and William Faulkner’s A Rose for Emily ”
Get custom paper
NEW! smart matching with writer

All these elements normally can’t be an option for a person to choose from because they normally compose part of the environment where the person was born or features that can’t be changed. These characteristics constitute and direct a person’s character and presence or easily called personality. In society every personality falls into different categories depending on what type of combination of dimensions of factors someone could have that let every person to grow its own style and behavior.

The personality can influence the opinion of person depending on its different factors and also when making decisions; for example, when a person wants to change its social economic status. A person shapes its authorial voice when the author possesses certain particularities because of the influence of internal and external dimensions that cause the development of different characteristics on its behavior that influence its own style and those elements are reflected at its work when writing, choosing a tone or bias.

When defining the words “authorial voice,” authorial means an originator or creator, as of a theory or plan and voice is linguistics expiration of air through vibrating vocal cords, used in the production of vowels and voiced consonants.

Authorial voice is referred to the unique way that every person has to express and idea, thought or opinion that makes it different from others. Kate Chopin is an American feminine author that wrote short stories in the early 20th century that influenced new generations because of her extensive work on favor of feminist movements that defend the idea of freedom for the women. The different dimensions of internal and external factors also lead Chopin to develop her personality. One of her external factors was her marital status. In the early 20th was when wives slowly began to insist on being regarded as their husbands’ equals, rather than their property. She married her husband a very young age, this factor make her choose a bias and a tone when writing because the concern of women of being oppressed in marriage it makes her take a position in society where she needs to defend her ideas. By that time women was designated to a men who better suited her depending on his economic status. The Napoleonic Code was in charge to regulate marriage where only the husband was favored this type of law shaped the author point of view about liberty and independence. An internal factor was her gender because women were recognize as a tool for service men. Women always were degraded and standing below men in the eyes of society especially if you are a low-income woman and did not belong to the social elite. In the early 20th was when women started to demand her rights as human beings since women considered to have the same capabilities as men and their desire to be considered equal to men in terms of skills. In society gradually this idea of women being an important piece got accepted and got reflected in different aspects of society as literature and politics. This aspects influence Chopin on his writing as motivation to demand a change on the ideas and definition society had about women and their freedom.

There’s different particularities that structure and influence a behavior. In “The Story of An Hour,” by Kate Chopin illustrate how her personality and the internal and external factors can be reflected on her work making her writing pieces distinctive from others. “There would be no one to live for during those coming years; she would live for herself” (Chopin). Clearly the character states the external factor of marriage status and the consequences of being finally free of her oppression in marriage when she believes her husband is dead. The author expresses her feelings and preferences of being widow than marry. It’s incredible how marriage was a statement of devotion to serve men in all his needs it amazed how women set her own ideas or desire because those were considered obscene or disrespectful. “Knowing that Mrs. Mallard was afflicted with a heart trouble, great care was taken to break to her as gently as possible the news of her husband’s death” (Chopin). The character Mrs. Mallard was highly considered by the people around her, they were very careful with the words used to introduce specific issues in to her because it was important to consider her feelings. By that time was qualify as minority group, weak, and animals which were easily moved by their feelings who could be brake effortless. So by that time being a marry women was a challenge for the females that needed to make their ways to achieve desires goals or considerations. In “The Story of An Hour,” the author conveys her desperate desire of freedom and independence, which was constantly denied in society. The character desire of her autonomy it was so great that lead her to a fatal end but the good news was that she reach what was her most desire dream, her freedom. It’s sad that this was the only way her mind and body offered her another option.

The authorial voice defines the author own style that gets reflected on his behavior and in its writing. William Faulkner was an American southern twentieth-century writer. He wrote novels, short stories, a play, poetry, essays, and screenplays. Faulkner is one of the most celebrated writers in American literaturthree items display on his personality. A young white smart men with great capabilities in literature and with a developed passion for writing inculcated since childhood enable him to display in his writing and decision-making it is easy to predict his success in life with all the good features on his favor shaping his future. Even thought, he faced WWI and WWII and got hurt on his leg even that gave him experience and the merit of having participated.

The internal and external factors influence different characteristic and experiences that help to outline the author authorial voice. In the story “A Rose for Emily,” by William Falkner it is readily understood by people that the tittle means “A gift for a lover in this instance called Emily.” But what the author really means are “The fake sympathy people made think others they felt.” What the author strongly portray is how often people make assumptions regardless of the circumstances just depending of different factors like the generation the person belong to, or the person interests. “When her father died, it got about that the house was all that was left to her, and in a way, people were glad. At last they could pity Miss Emily” (Faulkner). Here the author states how sad people think it is to a wealthy young lady to keep only property and no money to support herself. The internal factor of her gender and her age it illustrate the thinking of that time that women couldn’t work and just have to option to marry a men to financially support since she was getting older. Women didn’t have the opportunity to prepare and survive by their own just because they as women they needed help from a men or others. The author also expresses as the father as a supporter of her. According to the townsfolk they express how irresponsible was from the father to left her with nothing because as an image and pillar of a family was on his duty to left her money. Faulkner highlight in the story the town people way of thinking:

At first we were glad that Miss Emily would have an interest, because the ladies all said, “Of course a Grierson would not think seriously of a Northerner, a day laborer.” But ternal factors that lead him build his personality showing and explaining his points of view about life in general. One of the external factors that affected him was the educational background. Within a wealthy family but impoverished by civil war his mother, his maternal grandmother and a black woman called Caroline who raised him from infancy highly influenced and introduced him to read, to paint, photograph, and also educated him in visual language. All this elements allowed him to develop a quick and great passion for literature and art. An internal factor could be his gender, his physical ability and his race. All those there were still others, older people, who said that even grief could not cause a real lady to forget noblesse oblige. (III)

The author demonstrates the thinking of how noble people couldn’t take seriously poor people and that they shouldn’t get along or mixed. Here the external dimension of income takes place, because impact the town people that wealth people should stay apart and impact Miss Emily wanting to contradict the town people and to do what she wanted to do. “Then we said, “She will persuade him yet,” because Homer himself had remarked—he liked men, and it was known that he drank with the younger men in the Elk’s Club—that he was not a marrying man” (Faulkner). The town people start to assume that Homer is gay because of what they thought he was doing. Here the internal factor of sexual orientation impacts Homer life and the town people point of view of him looking like that they are just look for defects on him.

To conclude, every author project its own style in different ways influenced by characteristics or experiences that shapes its authorial voice. This gets reflected on its work when the internal and external factors make them behave in particular ways. The authors of early the early twentieth-century Kate Chopin and William Faulkner they each reflect clearly how their past experiences, and their cultural context affects their behaviors and way of thinking and interpretation of things around them. Showing on their short stories how relevant those internal and external factors can be. With a woman as a main character of their stories clearly expresses the relation between women and their relationship with society by that time of period. Women is still fighting for being as equal as men in society and its clear that its fight had been over time, and those who bear these ideas had been trying hard to be heard.

Authorial Voice in Kate Chopin's The Story of an Hour and William Faulkner's A Rose for Emily. (2021, Sep 21). Retrieved from https://studymoose.com/authorial-voice-in-kate-chopin-s-the-story-of-an-hour-and-william-faulkner-s-a-rose-for-emily-essay?post 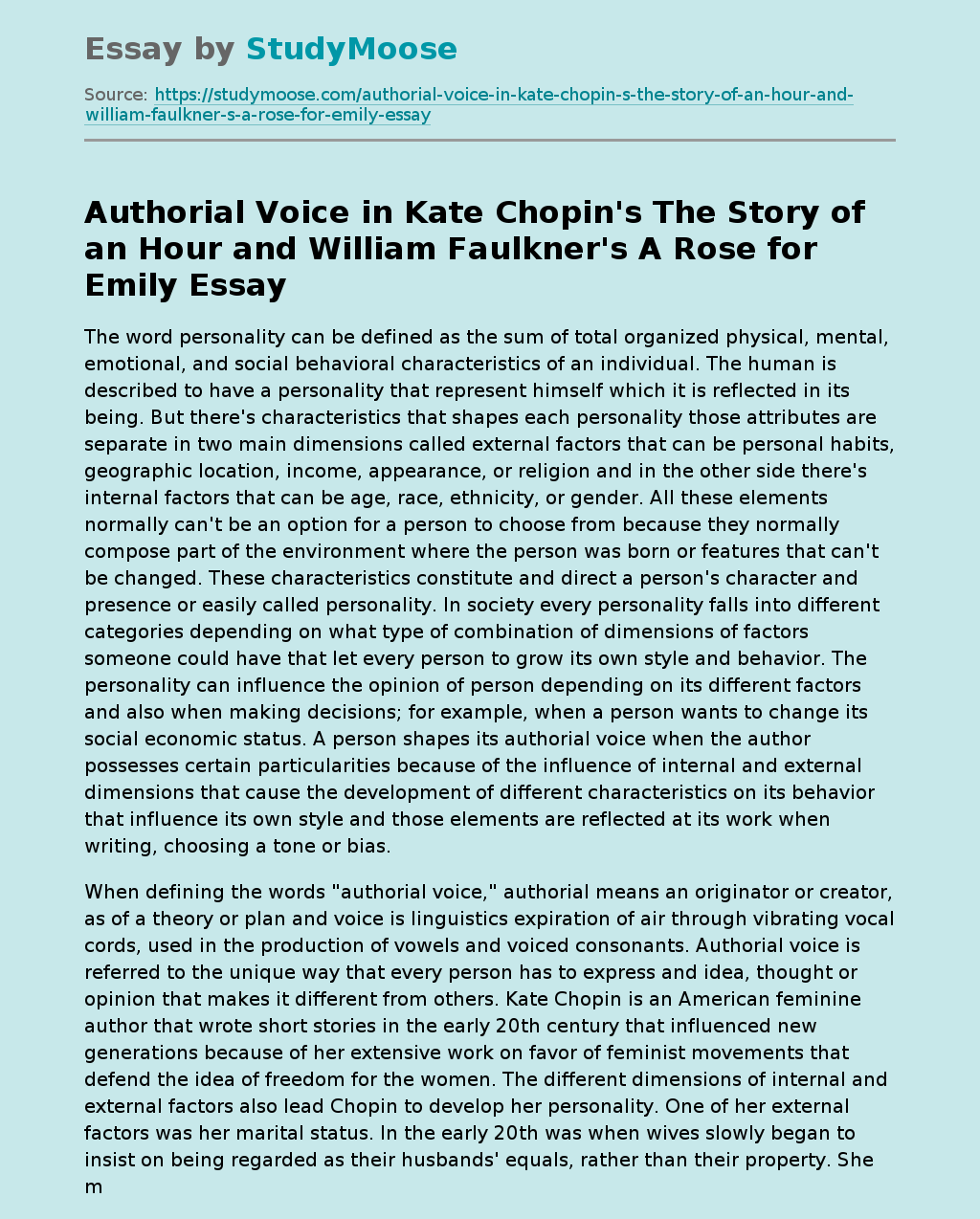