Austronesia, in historical terms, refers to the homeland of the peoples who speak Austronesian languages, including Malay, Filipino, Indonesian, Maori, Malagasy, native Hawaiian, the Fijian language and around a thousand other languages. The Austronesian homeland is thought by linguists to have been prehistoric Taiwan.

Researchers believed that our Ancestors came from Southern China and traveled through Taiwan and arrive in Batanes, a northernmost province in the Philippines. They Inhabited the Area for over a Thousand Years. After a thousand years they travelled to south and arrived at Madagascar and also travelled east and arrived at Easter Island in South America.

Don't use plagiarized sources.
Get Your Custom Essay on Austronesian Migration Just from $13,9/Page

These travelers are called “Austronesian Speaking People” which means speakers from the South East Asian countries like Philippines, Indonesia, Malaysia and many more. Austronesian People are also Great Seafarers. They build and use Canoes for travelling the Open seas. They also developed the Technology to navigate and cross the Open seas.

And they conclude that our Ancestors doesn’t cross land bridges from Brunei instead they used boats for Transportation. It is believed that Austronesians greatly contribute in the creation of different South East Asian languages an. These discoveries are proved by Relics and Artifacts found in the Colonized countries. Like Burial Jars ( Manunggul Jar ), Talismans, Jewelries ( Lingling-o ) and Tools/Ornaments. Since the Ancient times, Trades are present in the Philippines. Our Ancestors are trading Ornaments and goods for Minerals, Porcelain items, Jewelries, Accessories etc.

This proves that our Ancestors played an important role in the Growth of the Culture and Languages in the whole world. 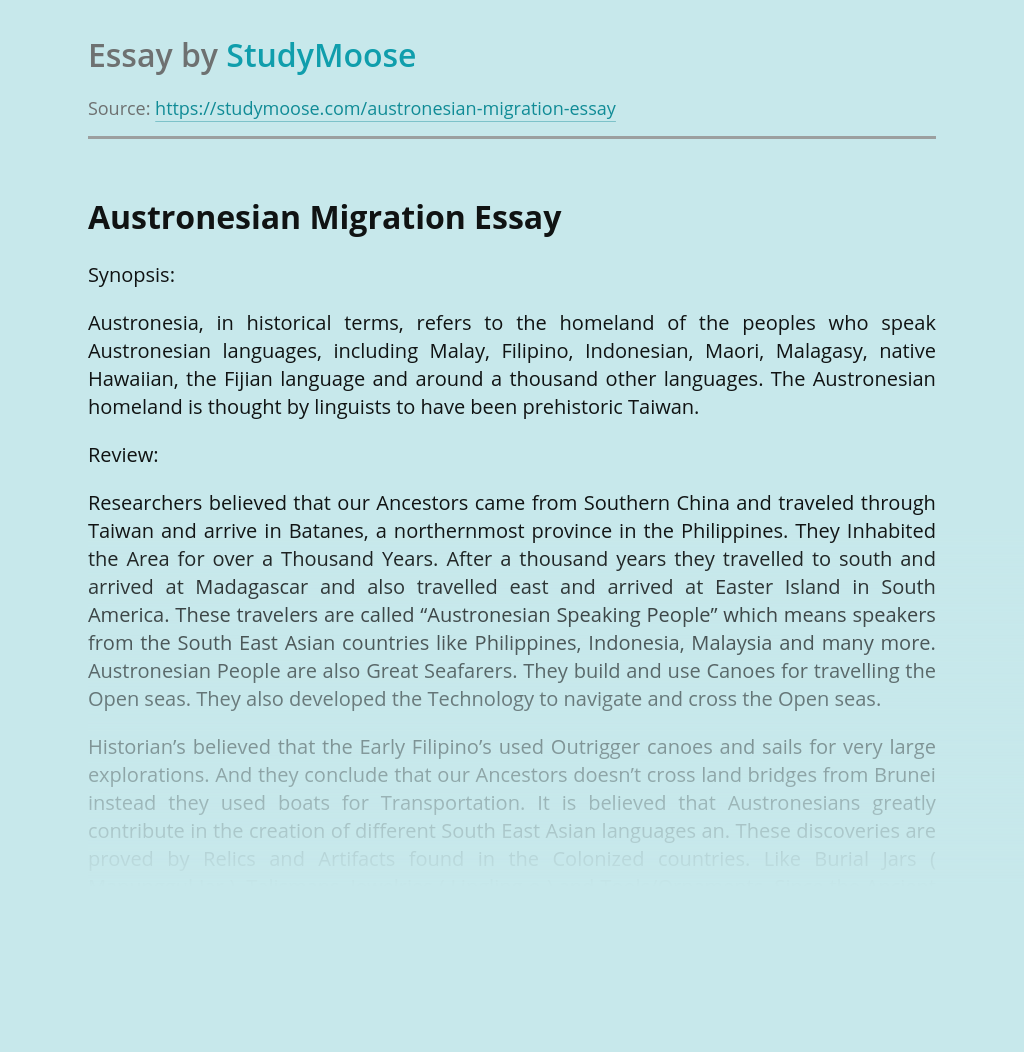 The Impact of European Imperialism in Africa

There are several reasons why the European nations competed with each other to gain colonies in Africa. They all wanted to gain power and prestige. The more territory that they were able to control in Africa the more powerful and important they thought they could become. Africa was tremendously rich in natural resources, which could...

Taking a trip is both an educational and leisurely activity. Going to various locations gives people a chance to discover new cultures and traditions which can assist in the promo of a pluralistic society. In every location that I explore, I make sure that I delight in the journey whether it is just by land,...

Get Essay
Compare and Contrast the spread of Christianity and Buddhism

Both Buddhism and Christianity from their origins to the sixth century C. E. had similarities in that the diffusion was attributed through missionary work and conquest. Meanwhile, Christianity spread through the down fall of Rome and Buddhism spread by Ashoka who sent monks to share the teachings of the Buddha. Christianity and Buddhism both spread...

Roles of Women in Post-Classical Periods

The Silk Road was many things: a connection for the East and West, a valuable empire building resource, focus of cultures colliding, and a strategic trade route. The most important of these is the connection between the East and West. Without this trade route cultures would have developed completely different, and the already distant lands...