The First Australians is a poem expressing Troy Hopkins’ hatred towards white settlers because of how they claimed Australia and labeled the natives ‘Aboriginal’. He called it an invasion, not a settlement and he says that the natives were the first ones there so they shouldn’t call them “aboriginal”. Hopkins then tells how the white settlers spilt the native’s blood on ‘sacred ground’ and they get rewarded for it. Hopkins speaks of Lex Wotton who is an aboriginal man who helps other aboriginals in places that they struggle such as court, because the juries are white australians.

Don't use plagiarized sources. Get your custom essay on
“ Australian poems ”
Get custom paper
NEW! smart matching with writer

Lex Wotton eventually went to prison and is now an inspiration to Hopkins. The author then goes on to talk about an aboriginal by the name of Richard Saunders, who was an aboriginal who died in prison due to poor treatment, Hopkins explains how no ‘Blacks’ are taken care of in prison because they are ‘expendable’. Hopkins says that he has ‘seen a pattern’, which is that aboriginal people are persecuted worse than white Australians and even half-cast aboriginals.

Hopkins talks about how his daughter is a half-cast aboriginal and she wants to have true black skin like her father, but he tells her that she doesn’t want that because to him it is a curse. Hopkins believes that to the aborigines, Australia is a dictatorship, not a democracy. The author thanks the SBS channel for sharing the aboriginals beliefs and that it’s kept them hopeful that some white Australians believe the same.

Hopkins ends with a powerful line which reads ‘Aboriginal is abbreviated, it means Abolish Original. We are The First Australians here; they are convicts, which are criminals’.

‘GAGADJU WAYS’ By Bill Neidjie: In the poem ‘Gagadju Ways’, the poet Bill Neidjie talks about the old, traditional Aboriginal way of life and how the old practices are slowly vanishing due to colonization. the poem is written in a peculiar way, a simple yet grasping format which puts across the views in a straight forward fashion. the poet first reminices that when he was growing up, he had good people around him. He says that the people now are a bit wicked. due to colonization he met have met some ‘foreign’ people living in his own country and yet not treating him nicely.

there is a posibility that he misses the companionship of his own people before the ‘outsider’ stepped in and began dominating him. They tried to made him feel like a stranger in his country. Nextly he tells us how the white man brought school and the Aboriginals began losing all their knowledge. It got in the way of their traditional upbringing and acted as a binding on them. the white man’s ‘education’ brought them no good. the poet talks on the behalf of all other native people and says that they never damaged the earth. when he burns grass, new grass comes up and it leads to new life.

More animals come in that area after this burning. The native’s people camped at different places during different seasons but the white man doesn’t understand this. The natives look after the earth, they do not spoil it. But once again we see that the invader is unable to understand the relationship between the natives and the nature. The white man wants to exploit the land in the country to earn money from it. But the poet says that money is nothing to them, they are not crazy for money as the white man is. The natives need the earth to live because when they die, they’ll become earth. The earth is their mother and their brother.

That is why they ask the invaders to leave their sacred land alone. They cannot bear their land been taken away from them because they are given birth by the earth and when they die, their ashes are going to be a part of the earth too. This poem shows us how beloved the earth is to the Aboriginals. ‘OKAY, LET’S BE HONEST’ By Robert Walker Robert Walker’s poem ‘Okay, Let’s be Honest’ is a heart wrenching poem about the suffering of an Aboriginal boy. He tells us honestly that he is no saint, he wasn’t born in heaven. He is called a bastard, animal and trouble maker by many. He admits that he has been mean and hateful.

Since the age of eleven he had been in and out of jail. He confesses that he has been dangerous and commited crimes. Then he suddenly tells us that he has always cursed his skin which is neither black nor white, just another ‘non-identity’, fighting to be Mr Tops. The accusers who have called him an animal were the silent audience when his brothers were getting smashed. His memory is still wet with his mother’s tears and by his father;s grave. His family was one among the many black families who were alona and lost in the race for money. He was made aware of his differences right from a very young age.

His pains educated him to either fight or lose. He was discriminated and exploited as a stranger in his own land. The scars on his brain can never be erased now and they keep him reminding how the others abused their sacred land. He is frustrated with the white man’s way of life and resists to live like him. Full of anger and complaints, he asks the white man that why is he made to live like a slave and earn the things which were once free. He refuses to be pushed aside and tramped on. He will not close his eyes to the sufferings of his people. He can no more pretend to not know what the white people are doing to his people.

He shouts out in rage and says “Why do I have to close my eyes, and make believe I cannot see just what you are doing: to my people- OUR PEOPLE- and me? He is not one side at all and wants the other to came and experience the lonliness and confusion he feels within the seven by eleven cell of the prison. He again repeats that he is no saint but then surely he wasn’t born in heaven. This is a very strong and evocative poem that depicts the anger in the minds of the blacks in Australia. FROM THE ENGLISH QUEEN By Henry Lawson: The poet addresses the English Queen as an ordinary woman. She is kept in a palace and people worship her.

The poet boldly says that those people must be blind to call that ‘dull old woman’ the ‘Queen’. The reason for the poet to be so openly rude about the Queen is that she has reigned for so many years but has scarcely done a kind deed to anyone alive. It is said in scorn that the poor sre starved the same day she was born. The poet complains that yet she is praised and worshipped for being nothing more than an ordinary woman. Henry Lawson goes to the extent of calling her a ‘cold and selfish’ woman because he sees no point in praising her for she has never brought happiness to anyone.

The Queen might be great for many but for the poet she is just a cold hearted woman who usurped his land and has no sympathy for the people. Thus a Queen who makes people suffers is no fit Queen in the eyes of the poet. ‘NOBODY CALLS ME A WOG ANYMORE’ By Komninos Zervos: The poet begins with the poem stating that nobody calls him a wog anymore. He is respected as an Australian, an Australian writer, poet. But this respect didn’t come on it’s own for the poet had to fight for it. He asserted himself as an Australian and as an artist. He stood up and screamed and fought for his identity.

He teels Australia that it likes it or not but the poet is one of it. He saya his first name Komninos is rather unusual but now Australia is stuck with it and cannot do anything about it now. He tells Australia that they both need eachother. He concludes the poem by saying that he likes ustralia now because it has stopped calling him a wog and calls him ‘the Australian poet, Komninos! ’. This is a weird yet fun poem which shows us how the poet rightfully asserts his right on Australia and merges to become a part of it. ‘WHO ARE WE? ’ By Richard G Kennedy.

Richard G Kennedy opens the poem with a question that asks where an aboriginal can truly be free in Australia, and how everything changed when the Europeans settled in Australia. The life before the white settlers was ‘Idyllic’ and that they had a ‘Oneness with nature’ and that they can never have that back. Kennedy explains how aboriginals now live in poverty and resort to crime to get through each day. The author tells how this is wrong and that nature is pained by the loss of the true aboriginal race. The aboriginals have no identity and are not heard amongst the white Australians.

The punishment for white Australians is that the ‘Vengeful Spirit will awake’ and the earth will be cleansed of the white race. Kennedy says it’s destiny and that there’s no going back. Thus through these poems we see how varied in culture and history Australia is. The different aspects of the country make it unique and the love of its people make Australia their home inspite of many problems. BIBLIOGRAPHY 1. TWO CENTURIES OF AUSTRALIAN POETRY: EDITED BY MARK O’CONNOR. (Oxford University Press, 1988). 2. THE GOLDEN TREASURY OF AUSTRALIAN VERSE (1918). 3. INTERNET. 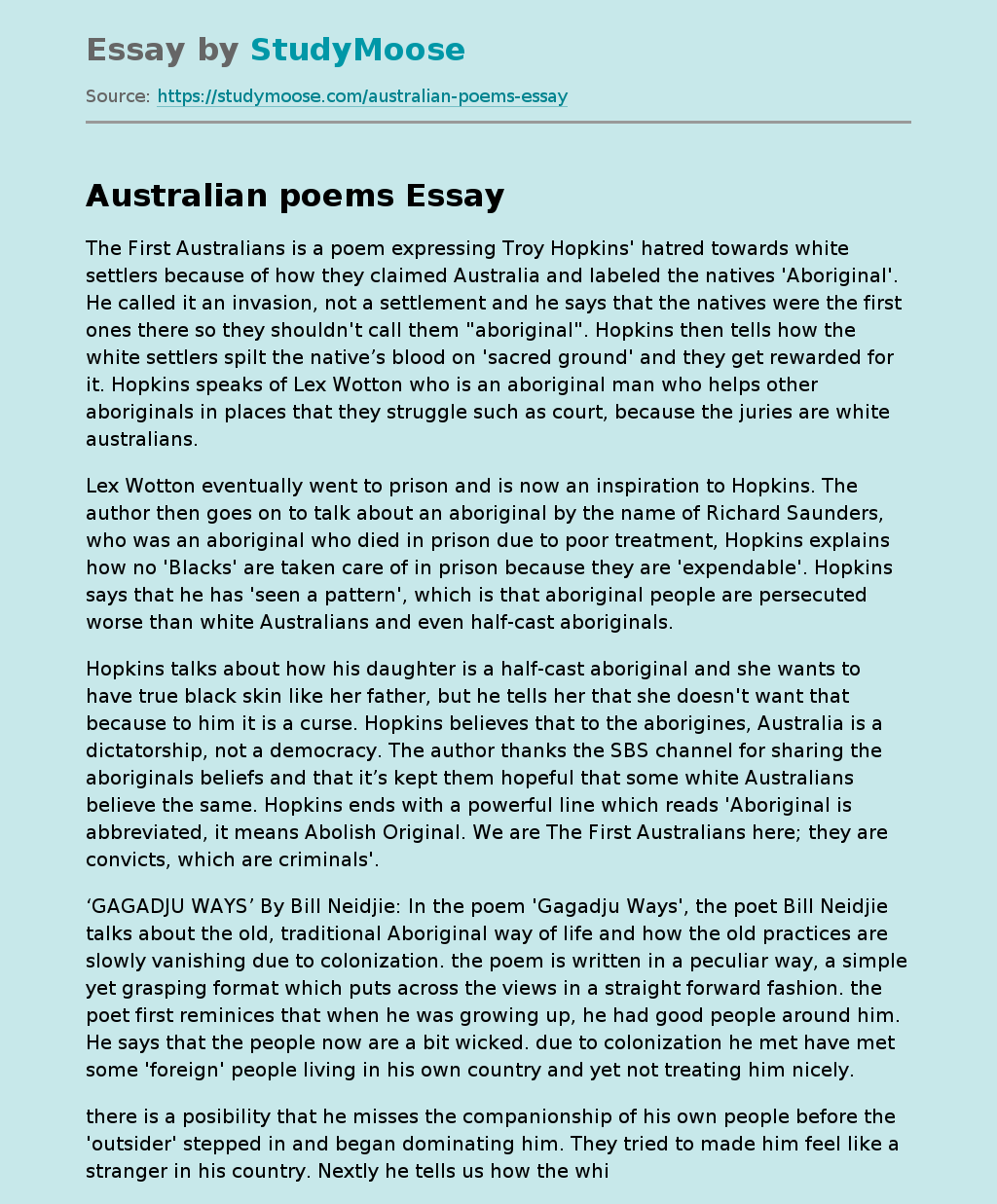