Australian Identity: I Was Only Nineteen Analysis

The text I have chosen to analyse in this written review is called ‘I Was Only Nineteen’, but also goes by the names ‘Only Nineteen’ and ‘A Walk in the Light Green’. It was composed by John Schumann, the lead singer/songwriter of the folk group Redgum. This examination will focus on topics such as the poetic techniques used, how Australian identity is portrayed, the effect the text has on the reader and my opinions.

I Was Only Nineteen tells the story of an Australian digger’s experiences preparing for, fighting in, and reflecting upon the Vietnam War as an old man, psychologically and physically damaged from the chemical defoliant Agent Orange.

Don’t waste time
Get a verified writer to help you with Australian Identity: I Was Only Nineteen Analysis
Hire verified writer
$35.80 for a 2-page paper

Although it may seem like a long time ago – the war ended in mid 1975 – the scars it left behind will never fade. John Schumann uses numerous poetic devices throughout his hit song. The most frequently used techniques include rhyme (as is the same for most lyrical songs), repetition, rhetorical questions and multitudes of colloquialisms.

Many of the mentioned techniques – as well as others in the song – provided the reader/listener with an opportunity to think about the theme of Australian identity. The colloquialisms applied to this ballad allow the reader to associate and relate to their own lifestyles in Australia. “Drinking tinnies” ¬– an Australian vernacular term meaning ‘drinking cans of beer’ – connects with the stereotypically casual attitudes of pub attendees Down Under. Schumann’s broad Australian accent for the entirety of this piece also expresses a feeling of Australia.

Schumann makes a habit of mentioning genuine Australian and Vietnamese locations. “Puckapunyal”, “Canungra”, “Shoalwater”, “Townsville”, “Nui Dat” and “Vung Tau” are some of the several places noted in this song. By citing factual towns/cities, Schumann creates yet another bond with the audience, as most members would have heard of at least one of these before. The rhetorical questions used in this have Australian aspects to them. Schumann quotes “the Channel Seven chopper chills me to my feet”, Channel Seven being a very well known Australian television channel.

By bringing up well known Australian icons and brands, the author involves himself with the audience. Although subtle, Australians can also relate to the line “Frankie kicked a mine the day that mankind kicked the moon”. This particular sentence describes the historical event in which humankind first set foot on the moon: “kicked the moon”. This is an allusion that many Aussies – especially those who watched the 1969 moonwalk on their TVs – would understand and could pertain to.

Through the use of poetic devices, the author has successfully encouraged the audience to explore their thoughts on Australian identity and to reflect on our nation’s history. Second paragraph: The language and tone of ‘I Was Only Nineteen’ is solemn and reflective of the past. John Schumann has used various types of vocabulary to show this. Schumann’s wording of this text is well planned and thoroughly thought out. Sentences in this piece frequently begin with ‘And’, implying that the author is not yet done telling his story.

In a way it symbolises that the pain of the war never ended, it is still continuing on. The chorus line “God help me, I was only nineteen” is a fundamental part of this song. It expresses the innocence and childhood that was lost by thousands of involuntary Australian soldiers during the war. This exact line is repeated four times throughout the song. On one occasion it is slightly changed to “God help me, he was going home in June”. This change, although only minor, adds more emotional significance to the statement whilst still continuing on the idea of lost innocence.

Repetition of the same word (also known as anaphora) generates a sense of emotion and draws the reader/listener in – waiting for the next addition to the story. The phrase “an Asian orange sunset through the scrub” has double meaning, the obvious one being the colour of the sky at that point in time. But when more research is conducted, it becomes evident that it could also be hinting at ‘Agent Orange’, one of the herbicides/defoliants used by the US military during the war. It killed the foliage of the Vietnamese forests so as to prevent the Viet Cong from taking cover in the trees.

Approximately 1 million people – including Australians – are disabled or have health issues due to Agent Orange. The theme of mateship and strong loyalty is also evident. Schumann says that he can still “see” and “hear Frankie”, implying that although Frankie lost his life, he will never be forgotten. “But you wouldn’t let your mates down ‘til they had you dusted off” also speaks of the fondness the author had for his fellow soldiers, dusted off being the military term for medical evacuation of wounded via helicopter.

Again, Australian identity comes into play: the characteristic of utter loyalty hat Australians are renowned for. On the whole, the vocabulary used in this song carries with it a wide range of emotional value and deeper meanings (these aspects become especially evident when the text is explored and broken down). The structure of this song is constantly that of a quatrain. The rhyming scheme follows no specific pattern, but commonly exists in the form of ABAB and AAAA. A notably identifiable characteristic of this piece is the way the story is set out. The majority of the paragraphs feature a diverse location and emotion of the crowd.

The opening stanza states that “Mum and Dad and Denny saw the passing out parade at Puckapunyal”. The setting of this verse is Puckapunyal and addresses the family members of the protagonist. The tempo is moderately slow and the feeling in the atmosphere is one of speculation for the unknown future to come, but also apprehension – “It was a long march from cadets” and a slight amount of self-doubt. In the second verse, the cadence speeds up and a sense of excitement begins to build. The thought of being amidst the action of the Vietnam War becomes very real and very near.

This verse is the debut of the chorus line “God help me, I was only nineteen” – an appropriate time, due to the nigh possibility of death. “Townsville lined the footpaths as we marched down to the quay” mentions the Queensland city and its inhabitants. There are many other examples of this throughout the song, including Vung Tau and the maturity with which it is spoken of (in the third verse), the Vietnamese jungle and the living with the fear that “each step could mean your last one on two legs” (stanzas five and six) and back home in Australia, reflecting on the war and its events (eight and nine).

The author has purposely made the shortest lines (6-7 words and 8-9 syllables) the most powerful. “It was a war within yourself” – one of the shortest lines – metaphorically describes how the overwhelming sensations of the war threatened at every moment to take over your soul. There are nine stanzas, each consisting of four lines. Although it may not seem like it, this layout is actually for a reason. The song Stairway to Heaven by Led Zeppelin contains long verses, sometimes as long as nine lines, which creates a flowing story and often doesn’t give the audience a chance to consider the impact of the lyrics.

However, I Was Only Nineteen, with its four line verses, permits the readers and listeners to reflect and contemplate the meaning and poignancy of the stanza in the pause that follows. The flatness and monotony of Schumann in the song mirrors the futility and fatalistic attitudes of the Vietnam soldiers. They were well known for their ‘live every day as if it were your last’ approach on life. Many combatants, as young as fourteen (this was an illegal age and they used false documents) had no plans for the future, apart from having fun whilst they were still living.

To many Australian citizens back then – and still now, the Vietnam War was pointless. Some say it wasn’t worth more than six million lives (civilian and military) just to stop North Vietnam’s communisation from taking over, others say otherwise. Although we will never truly known what it was like, Schumann’s writing allows us as readers/listeners to experience a smidgen of what it would have been like. Schumann has evidently spent time assembling the superlatively set-out structure, as this greatly impacted on his audience, including myself.

After studying this text, I have developed a much greater and more profound respect for the Vietnam veterans. It isn’t spoken of much – not compared to the World Wars. These men and women were following instructions and it is not individuals who are to be blamed for the millions of casualties. Schumann has brilliantly yet terrifyingly depicted the horrors of war and the suffering endured by veterans for years – even decades after the fall of Saigon. His use of assorted poetic devices, intelligent and well-planned vocabulary and meaningful structure pave the way for a sure masterpiece.

Australian Identity: I Was Only Nineteen Analysis. (2016, Oct 09). Retrieved from http://studymoose.com/australian-identity-i-was-only-nineteen-analysis-essay 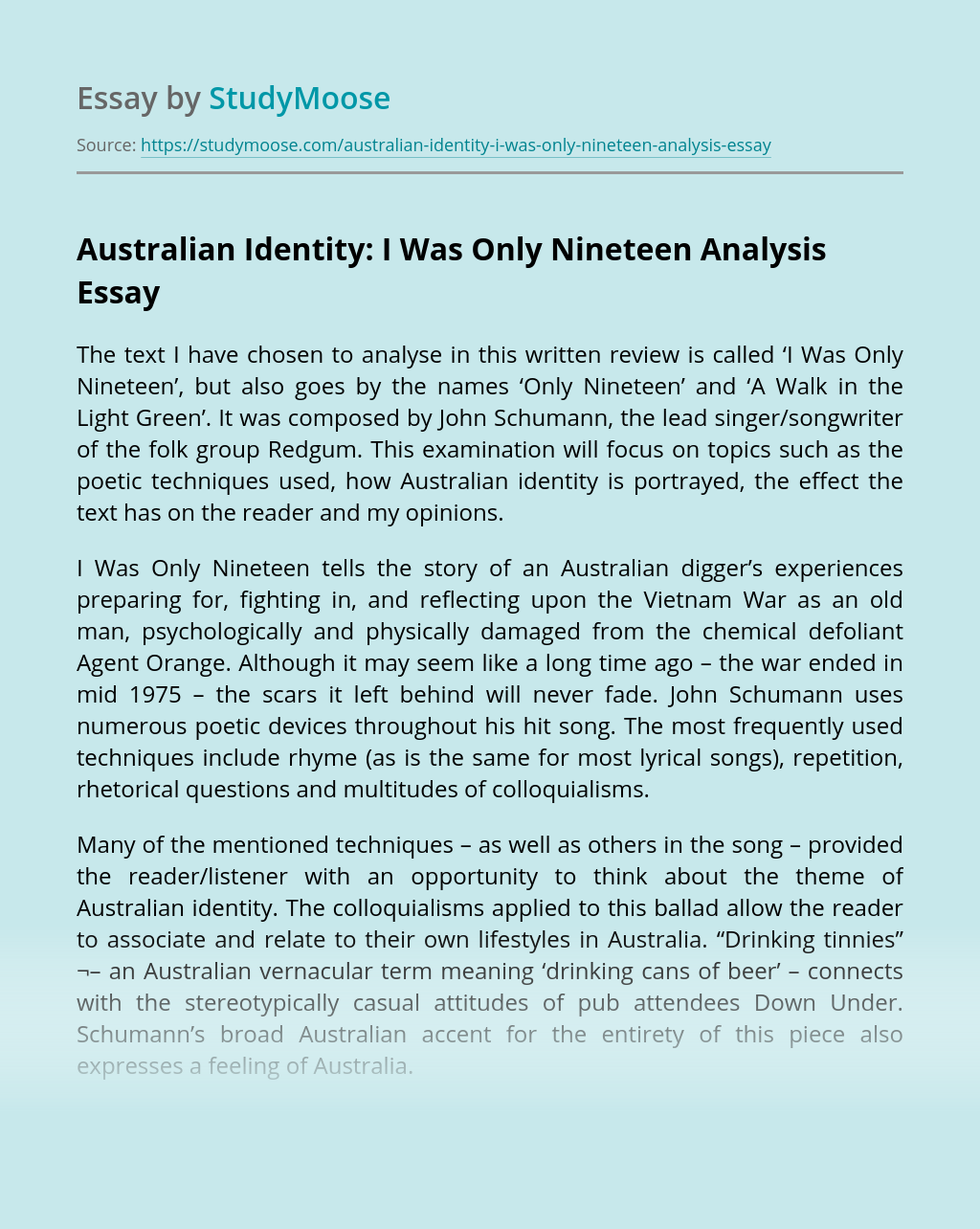 Don’t waste time
Get a verified writer to help you with Australian Identity: I Was Only Nineteen Analysis
Hire verified writer
$35.80 for a 2-page paper
Stay Safe, Stay Original